2018 was once the anticipated new year everyone looked forward to, as the crypto world was filled with positive predictions and expectations for the year.

Now the year is fully spent, and its events are history. It is important to take a retrospective look at the year to see how far the industry really developed.

Here’s a look back at the key events and happenings that rocked the crypto world in 2018. 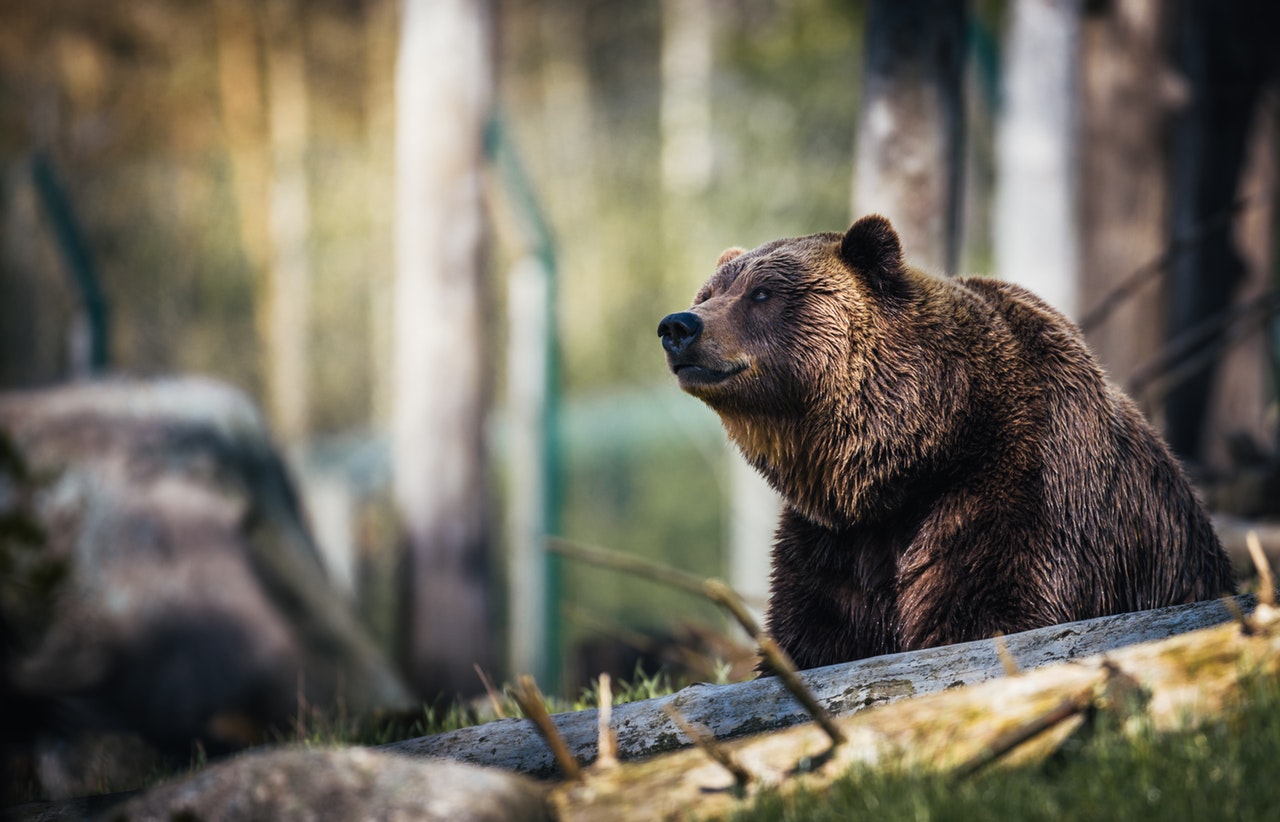 Most cryptocurrencies had their all-time highs in January 2018, but since then the markets have been increasingly bearish. There were several price support levels on the way down, and each caved in with time.

Most altcoins have suffered more severe losses. Ethereum, for example, has suffered a more than 90% drop in price through the course of the year.

Other altcoins have suffered the same level of losses and even more, except for exchange coins and stablecoins. Stablecoins retained their stable value while exchange coins suffered a much less severe drop in price.

The negative price trend did affect public sentiment on cryptocurrencies — however, it did not affect fundamental development in the blockchain space.

Some of these exciting developments include:

Furthermore, LinkedIn affirms that blockchain development is the biggest growing job sector in 2018. Research by Glassdoor also indicates that blockchain jobs are growing at a faster pace despite the dropping prices of the crypto market.

In fact, it was established that blockchain jobs pay well above the median US salary, as can be seen in the chart below: 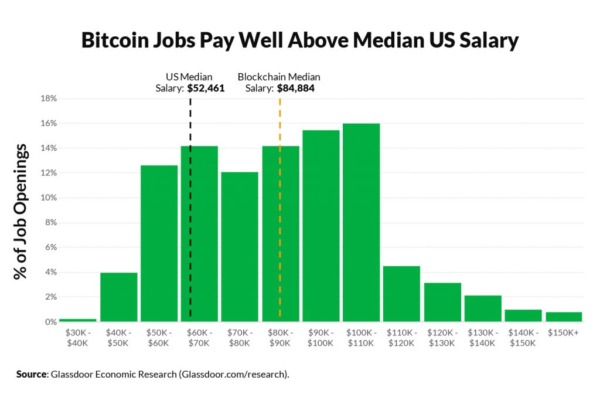 This is an indication of the strength of the industry. Despite the market downturn, the industry continues to attract tech talents to build and improve blockchain systems around the world.

The Arrival of Crypto Regulations

After the massive surge in prices in 2017, cryptocurrencies began to gain a lot of attention from governments. This resulted in several rumors, back-and-forth statements, and bans over the course of 2018.

The pressure from regulators mounted on several blockchain projects, most of which are already falling behind on their targets. Notably, the US Securities and Exchange Commission (SEC) clamped down on ICOs that were unregistered with federal regulators.

South Korea regulated the crypto market in 2018 by banning anonymous trading of cryptocurrencies, forbidding minors and government officials from trading, taxing crypto exchanges, lifting the ban on ICOs, and legalizing Bitcoin as a means of remittance.

Another notable development was when the G20 leaders agreed to regulate the cryptocurrency space.

Regulations are a necessary step for the next level of growth of cryptocurrencies as they provide the necessary checks and balances to stabilize and fully legitimize the crypto space. Also, the presence of regulations reduces the scams and fraudsters that try to take advantage of people.

A decentralized system is theoretically difficult to hack, but that has not prevented bad actors from trying.

The 51% attack on Proof-of-Work systems was a point of vulnerability in 2018. This affected Verge, Monacoin, Vertcoin, Zencash, Litecoin Cash, and Bitcoin Gold over the course of the year.

While some projects have learned from the experience and moved past it, others are still grappling with how to guard against future occurrences.

The hacks were not limited to the blockchain. Crypto exchanges experienced more severe occurrences of hacks in 2018. Some of the affected exchanges include Coincheck, Coinsecure, BitGrail, Coinrail, Bithumb, and Bancor.

According to the Wall Street Journal, hackers stole over $800 million in the crypto space in 2018. This, of course, has forced the ecosystem to grow smarter and tougher with security.

Early in the year 2018, Facebook issued a ban on cryptocurrency ads on its platform due to the fear of users being scammed. This is important, as the platform houses more than 2 billion users from around the world.

Google followed suit in June 2018, banning cryptocurrency ads across all their platforms. This was a blow to many genuine crypto projects that were seeking publicity at that time.

However, towards the end of the year, both companies reversed their stance on crypto ads.

Facebook reversed its crypto ad ban by updating their policy. Now, crypto ads will be assessed by Facebook to ensure the project’s legitimacy before being allowed to run on the platform.

Google also has reversed its ban and revised its policy on cryptocurrencies.

These bans painted a negative outlook for cryptocurrencies, giving the general public the impression that the industry is illegal. The reversal of the bans signals growing legitimacy for the crypto market. 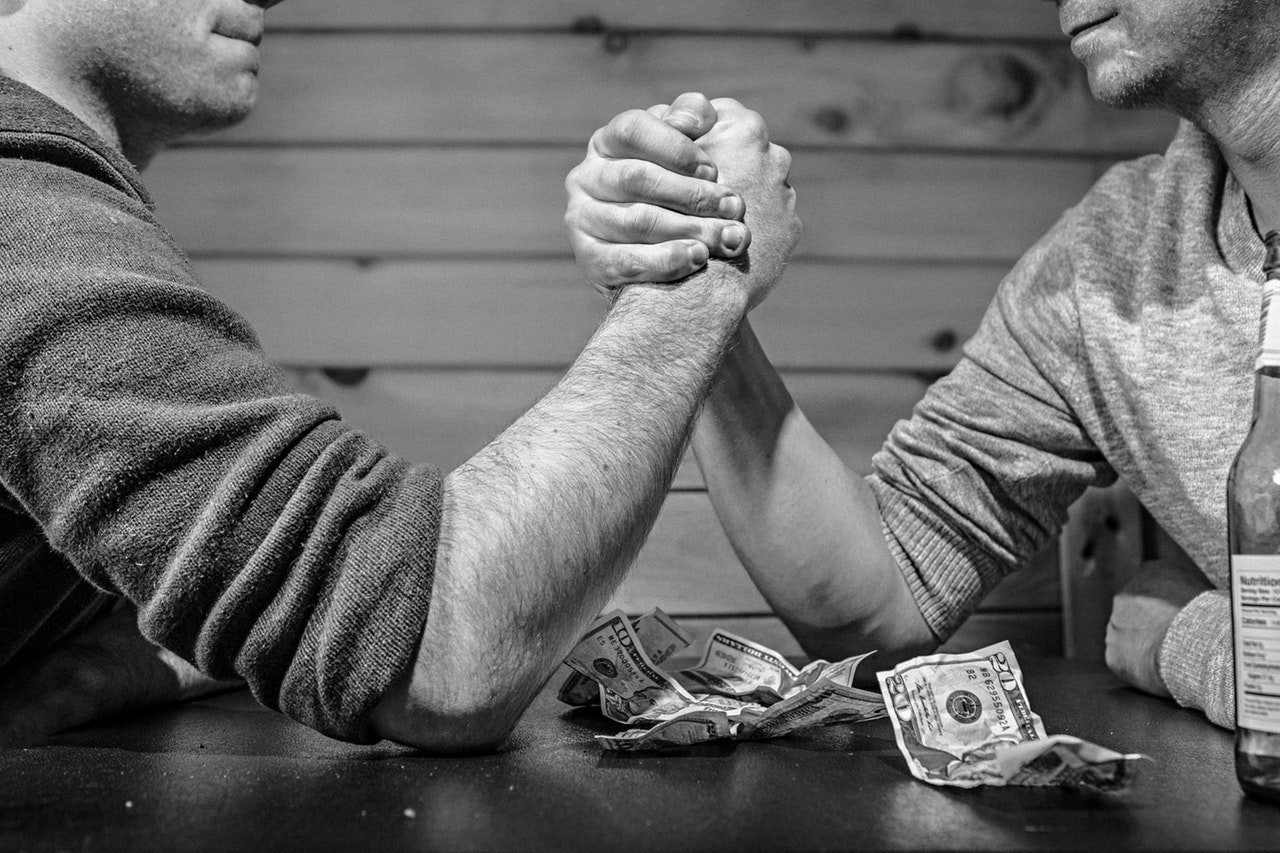 One of the most profound events in the crypto market in 2018 was the Bitcoin Cash hard fork that took place on November 15, 2018.

The first fork of BCH took place successfully earlier in the year. However, there was no consensus on the issue of the second fork, which lead to a split of the cryptocurrency into Bitcoin SV and Bitcoin ABC.

Both cryptocurrencies resulting from the split suffered heavy casualties from the war that ensued. There was even a battle over who would keep the original BCH ticker symbol.

The immediate impact of this war was a drastic reduction in confidence in the crypto projects involved. It also contributed to the further downturn in prices that affected the whole crypto market in November.

The Rise of Stablecoins

With crypto prices plunging in 2018, investors began looking for ways to hedge against the price dips.

The stablecoin widely known in 2017 was USD Tether. However, there were controversies about whether the coin was really backed 1:1 with the U.S. Dollar.

Several stablecoin projects sprang into the market, taking advantage of the failing trust in USDT. Many of them were projects by crypto exchanges.

The stablecoins that launched in 2018 include LBXPeg (by London Block Exchange), Paxos Standard (by Paxos Trust Company), Gemini Dollar (by Gemini Trust Company), USD Coin (by Circle Internet Financial Limited), and Candy (by Bank of Mongolia). 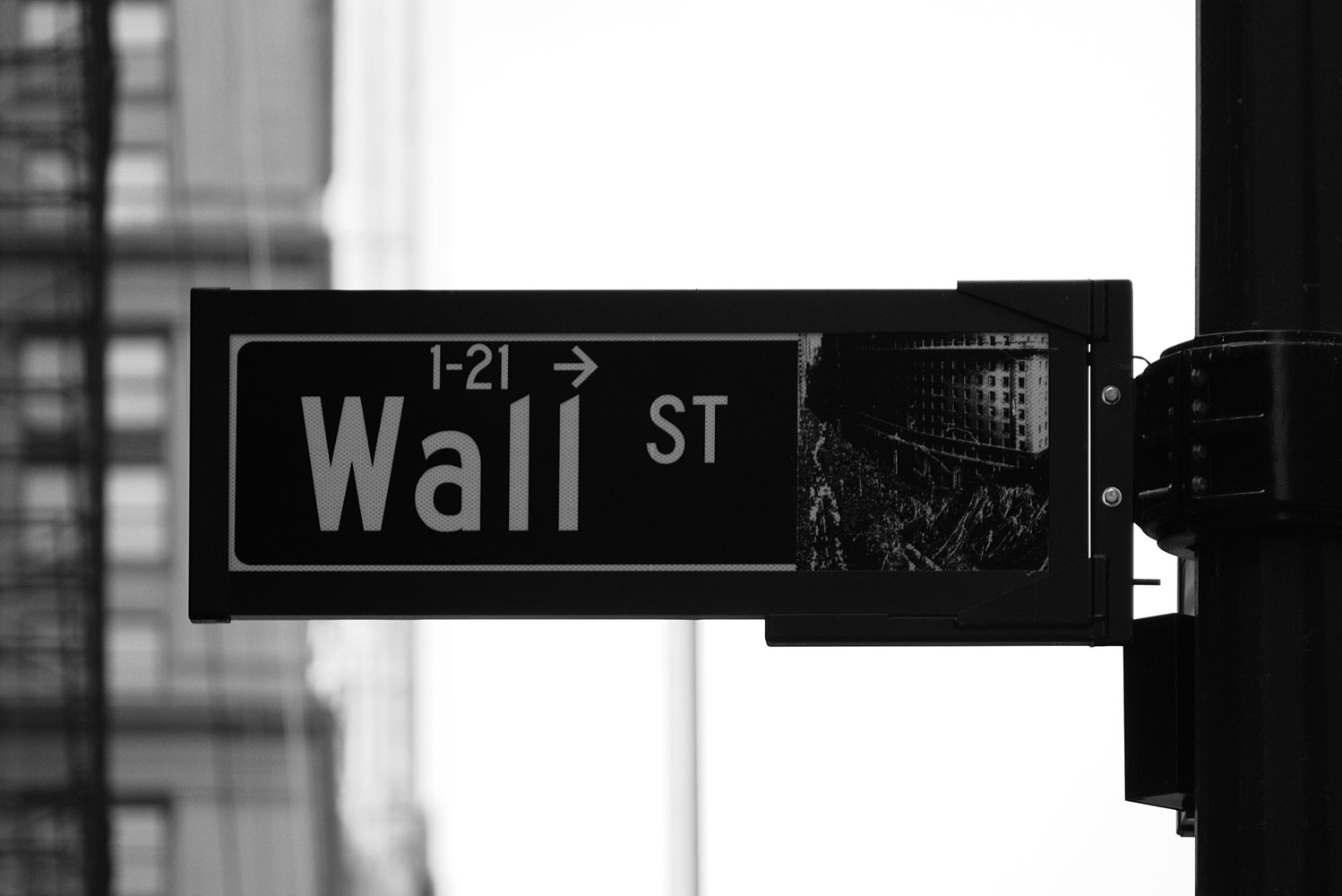 Institutional investors did gain interest in the crypto space in 2018.

Fidelity Investments announced that it has a mining operation making money for the firm.

Then, they expressed further interest in cryptocurrencies by launching Fidelity Digital Asset Services in October 2018 to provide cryptocurrency custody and trading services for institutional clients. The service is set to begin operations in Q1 2019.

Another important milestone in institutional adoption is Bakkt. Bakkt is a new digital asset platform by Intercontinental Exchange (ICE), the parent company of the New York Stock Exchange (NYSE), which is also backed by Microsoft and Starbucks.

Bakkt is announced to be a regulated futures exchange for Bitcoin. The launch of Bakkt was postponed throughout 2018, and currently set to launch in late January 2019.

Also, 9 Bitcoin ETF applications were denied by the SEC in 2018, and a petition by the Winklevoss twins over their initial Bitcoin ETF rejection was denied.

However, this has not deterred other attempts to make institutional adoption of cryptocurrencies more appealing.

In August 2018, the SEC delayed their decision on another Bitcoin ETF by VanEck and SolidX (in partnership with CBOE). This decision will be made in February 2019.

2018 was a dramatic year for cryptocurrencies. Some crypto projects lost momentum and were strangled by the bear markets over the course of the year, while new ones were born.

Plus, there are several bullish signals for the near future.

For instance, there’s the launch of Bakkt and Bitcoin ETF approval slated for Q1 2019. However, their effect on the market may not kick in strongly until Q3 2019.

We can also look forward to developments from the top 10 cryptocurrencies as well as various other projects in the market. There are trends that might dictate the state of the market in 2019. However, given the nascence and volatility of the space, the market may react differently.

While 2018 was mostly bearish (except for fundamental developments), 2019 calls for cautious optimism.