If you’ve ever hailed a ride with Uber or booked a place to stay on Airbnb, you have taken part in the “sharing economy.” Sharing has been a part of human interaction for millennia, but technological advancements have made it easier than ever for owners of underutilized homes, cars, and other assets to find consumers willing to pay a fee to use them.

Tech-savvy young people are helping foster the sharing economy, but at this point there are very few pure-play “sharing” stocks. However, many companies are using the trend to start new business segments and transform existing operations. Here are two doing just that, Booking Holdings (NASDAQ:BKNG) and Ford Motor Company (NYSE:F), as well as peer-to-peer lender Lending Club (NYSE:LC).

While not a hard asset like a home or car, lending services have also come into the crosshairs of the sharing economy. Lending Club, the nation’s largest peer-to-peer lender, gets borrowers lower interest rates and smaller fees than a credit card or other traditional lending source typically offers by connecting them with investors on its online platform.

Since becoming a public company in December 2014, Lending Club revenue has soared more than 50% as seeking out alternative means of funding has increased in popularity. That sounds like a great investment, but Lending Club has actually fallen on hard times. It has been riddled with scandal the last couple of years, stemming from a Federal Trade Commission complaint filed in 2016 regarding the company’s disclosures and other communications to borrowers and lenders. Those regulatory issues are still ongoing and contributing to elevated costs and have pushed operations into the red. The stock is down 75% from its 2014 debut as a result.

Other concerns, like increased competition, have surfaced: Goldman Sachs‘ online-only bank Marcus is just one of them. But there is some hope for this “sharing” company as first-quarter 2018 revenue increased 22% on an 18% increase in lending origination. The stock is high-risk with so much uncertainty swirling around it, but it nevertheless is still the leader in the peer-to-peer lending industry.

While Airbnb may have become synonymous with sharing rooms, apartments, and homes for vacation and other short-term needs, the online accommodations company hardly has a big head start. That’s because the world’s largest online travel company, Booking Holdings, plays in the space, too.

When last updated in summer 2017, Airbnb boasted 4 million worldwide listings of unique places to stay, including homes, tree houses, yurts, RVs, and boats. However, Booking.com — the largest subsidiary of Booking Holdings — said it had over 5 million unique listings on its platform as of the end of March 2018. That’s in addition to the 23 million hotels, motels, and resorts that Airbnb doesn’t have, giving travelers a one-stop shop to price and compare accommodations. 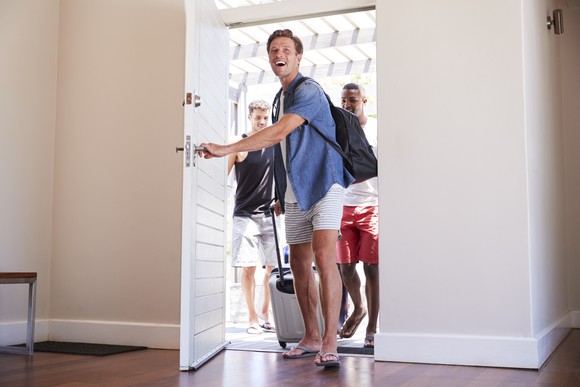 It’s worth noting that while Booking has emerged as a leader in the sharing space, that’s still a small portion of its overall business. Besides its traditional accommodations business, it also makes money off of rental cars and airline tickets, and total revenues were $2.9 billion in the first quarter of 2018. Nevertheless, unique listings are helping the company continue to grow the top and bottom lines by double digits. For those wanting to bet on the travel industry getting disrupted, Booking Holdings is a good place to start.

The auto industry has an answer for the sharing trend

Everyday investors can’t access new transportation sharing companies like Uber and Lyft, since they are private companies, but that might be OK. The auto industry has been busy with its own initiatives, and Ford has been particularly vocal about its plans.

Like many auto manufacturers these days, Ford has numerous tech-enabled start-ups centered around self-driving vehicles, ride-sharing services, and cars by subscription. Ford has made monetizing these various initiatives a top priority, cutting expenses and reducing investment in developing cars of the past in order to fund technology for the future. For example, Ford recently said it would stop investing in sedan development in North America, focusing instead on SUVs, crossovers, and bringing electric powertrains to all of its remaining models.

Ford’s total revenue in the first quarter of 2018 was $42 billion, though it doesn’t break down specific sales figures for its Mobility Segment that houses its sharing start-ups. It was disclosed that the segment realized an operating loss of $102 million, which is inclusive of a one-time investment gain of $58 million from one of its subsidiaries. At the heart of the whole division is Ford’s Transportation Mobility Cloud, a data service that will soon be available as a subscription for cities and other businesses looking to make getting places easier and safer. That unique offering could end up being the platform that future transportation sharing services run off of.

The “sharing economy” is still new, and thus there are few ways to access it as an investor. The best bet at this point is to buy companies using the movement early on to their advantage. Results will be mixed, as many Lending Club shareholders can tell you, but the trend toward increasing the efficient use of assets is under way. It’s time to start paying attention to it!