For many Nintendo fans and early Switch owners looking for a new game, Mario + Rabbids: Kingdom Battle could be their first tactics experience. But even if you’re familiar with the likes of XCOM, Kingdom Battle is not easy. It has its own intricacies that require a lot of strategy and creative thinking if you want win.

That’s why we’ve put together a few tips to help players jumping into Mario + Rabbids’ world of turn-based shooting. While we can’t hold you hand and walk you to victory, our advice will give you a starting edge as you learn your way through Nintendo and Ubisoft’s satisfying strategy adventure. 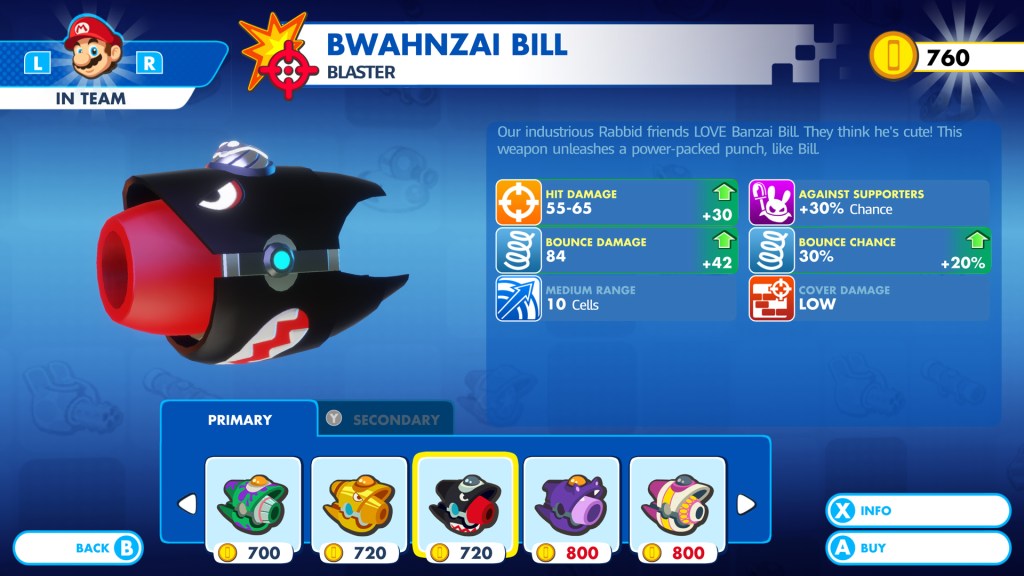 Above: You’ll want to use coins to buy better weapons.

You earn coins by walking over them throughout the world. Sometimes they’ll explode out of defeated enemies. But you’ll get the vast majority of coins as rewards for beating battles. They are a precious commodity that you use to buy new weapons. This is the most significant way you’ll increase the damage that your party deals. You won’t get far if you’re not upgrading your weapons.

But don’t upgrade every chance you get. Weapons are expensive. You won’t be able to afford every single new one you come across, so you need to be smart about when you splurge on a new gun.

After you defeat every midboss and stage boss, you’ll find new weapons go on sale. These are the ones that will have actual increases in damage stats. This is usually when you want to go on a shopping spree. Other weapons you discover between those fights will only offer bonuses against specific kinds of enemies.

So, you already spent 1,000 coins on a new gun for Mario. Is it really worth it to spend another 1,000 just because a slightly newer one deals 30 percent bonus damage to Smasher enemies? Probably not, especially when you need to make sure your three characters have up-to-date primary and secondary weapons. Basically, prioritize straight damage increases over everything else and don’t overspend. 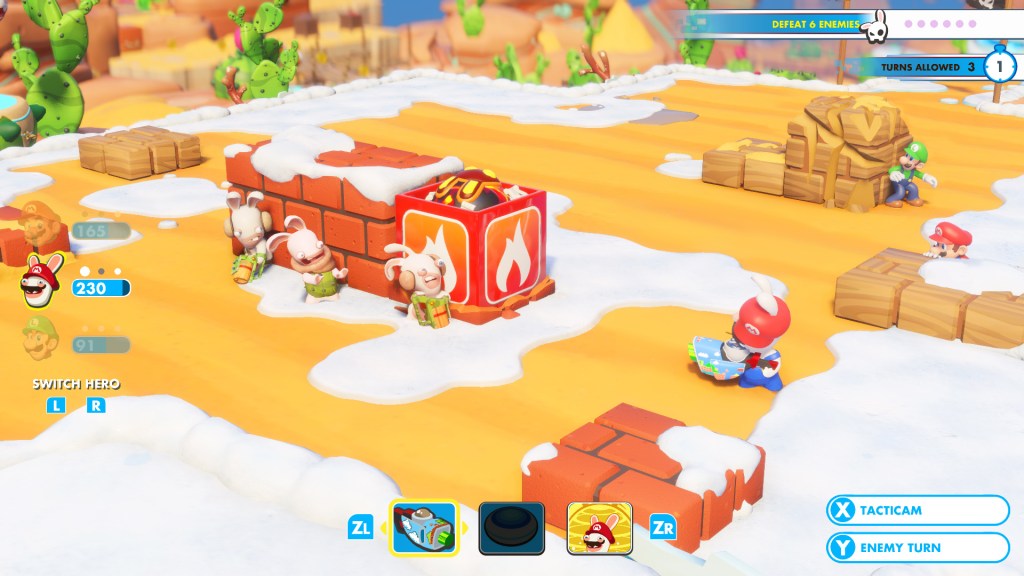 Above: Self-explanatory tip: don’t hide behind the fire boxes.

Use your overwatch abilities

No, I’m not talking about the Blizzard game. The overwatch term comes from XCOM, a strategy series that Kingdom Battle takes plenty of inspiration from. It’s an ability that lets characters attack enemies that move into their range, even if it isn’t their active turn.

Mario, Luigi, Peach, and Yoshi all have overwatch-style abilities, and they’re invaluable. If you’re about to end a turn but enemies are still in range, turn them on. Once you boost them up a bit in the skill trees (and I also recommend using your skill points for overwatch-related buffs early), you can clear out a lot of bad guys with the ability.

Each has a cooldown, meaning you have to wait a few turns before you can use it again. Activate it as often as possible (as long as enemies are in range) to make sure you’re dealing as much damage as possible every fight.

Overwatch is also useful for taking out some of the toughest enemies. Smashers are beefy and powerful melee bruisers that deal a ton of splash damage to anyone they get next to. They also automatically move toward anyone who shoots them. You can actually activate overwatch before shooting them, which will then give you free hits on them after your initial attack. 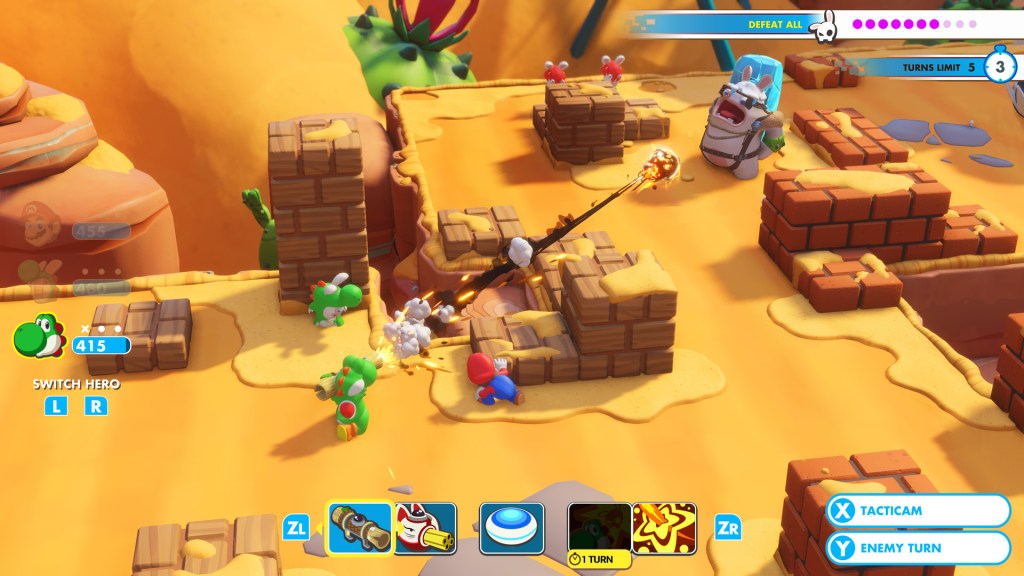 Above: Staying behind cover can keep you safe … usually.

Heal when you can

Peach and Rabbid Peach are the only two characters that can heal allies, so you’ll probably want at least one of them in your party. Peach restores a small amount of health whenever she lands a jump near friendly characters. Rabbid Peach has a cooldown ability that heals all nearby allies.

You’ll want to heal as much as you can. You might have a character with half of their health gone, and you might think that they can take another hit or two. You might think you don’t want to use that healing cooldown until you absolutely need to. But your situation can sour fast, and even missing a little bit of health before the start of a turn can make it your last.

Also, you’ll sometimes need to fight two battles in a row without the game automatically restoring your party. So, even if a fight is about to end, go ahead and use a heal to top your part off before the next battle. Also, if you do start a new fight with a group that’s missing some health, go ahead and heal up first thing. 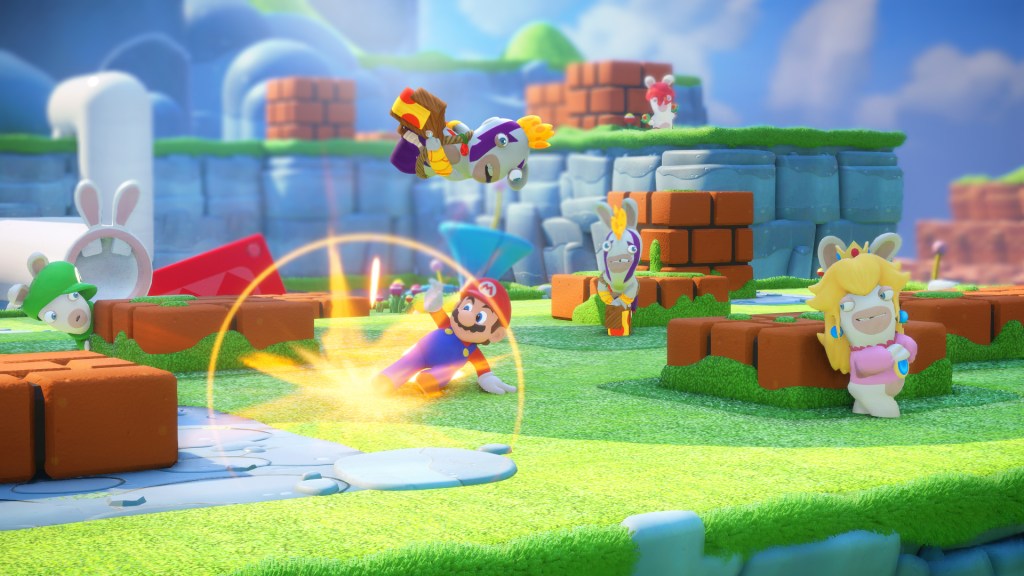 Above: Sliding toward victory.

Guns are expensive. It’s hard enough to keep three party members stocked, but you’ll quickly run out of coins if you try to give every character up-to-date weapons. So once you a find a party of three that you like, try to stick with them and only focus on buying stuff for them.

It is safe to swap party members when you add a new character to your roster, since they’ll come equipped with something decent. It’s also OK after you beat a midboss or boss. At those points, you have to buy new weapons for everyone anyway. 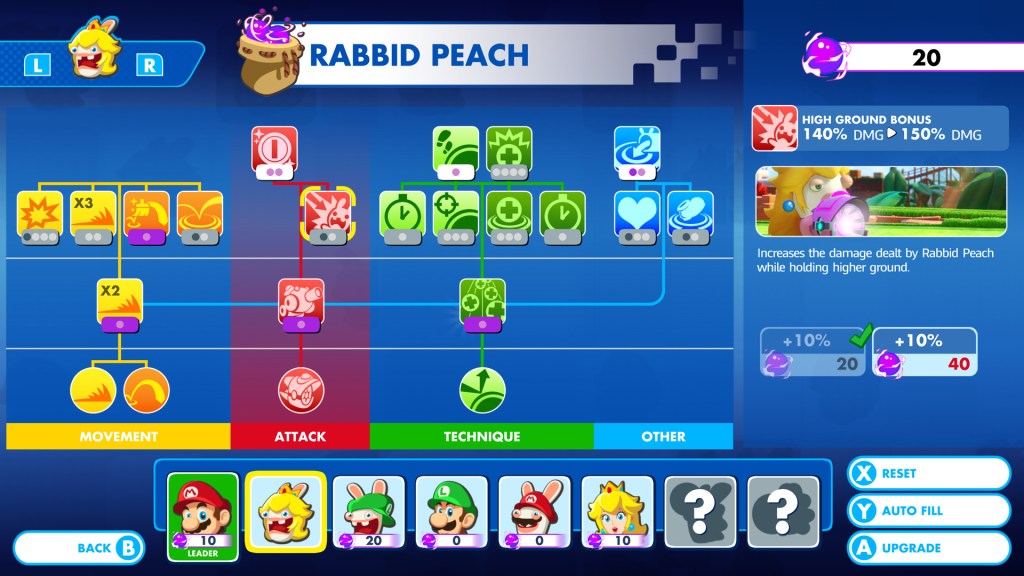 Above: The Skill Tree helps you make your characters stronger.

Prioritize damage on the skill trees

Kingdom Battle’s skill trees don’t have a lot of branching paths. After only spending a few points, you’ll be able to access every upgrade. So you’ll have a lot of options.

Try to focus on the ones that will increase your damage output. If you’re spending skill points on a character with overwatch, you can make it stronger by boosting its attack power, having the character fire more shots per use of the ability, and shortening its cooldown. You’ll also want to spend points on nodes that increase the damage of your melee slides and increase your attack power when shooting from higher places. In general, prioritize the less situational ones first (you’re more likely to be sliding into enemies that shooting them from above).

Focus on these buffs before investing in ones that increase your mobility, health, or coin gains. Upgrades that boost your healing characters abilities are the one exception.