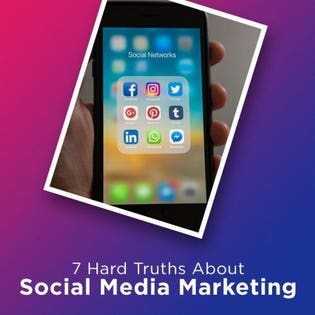 You’ve likely heard that social media has the potential to help you multiply your revenue, far in excess of what you spent over the course of the campaign. A few years ago, there were reports of businesses seeing returns of 100, 200, or even 1,000 percent, and even today, most marketers will tell you it’s one of the highest-ROI online marketing strategies available, in part because of the low costs and nonexistent barriers to entry.

1. Not all marketers see a positive ROI.

Despite the fact that 77 percent of marketers are using at least one social media channel to market their business, only 48 percent of businesses claim to see any ROI whatsoever. There are many reasons for this discrepancy—most of which are accounted for in the following points.

2. It takes significant time and effort to be successful.

Social media isn’t something you can “turn on” and expect to start seeing an increase in revenue or conversions. It takes time and effort to build a successful social media presence; you need to have a thorough understanding of your target market, you need to carefully craft your messaging and time your posts adeptly, and on top of that, you need to be active consistently, engaging with your audience, sometimes for months or years, before you see a return on the investment. Chances are, you won’t break even your first month, both because it takes a long time to generate a significant following and because you’ll make lots of mistakes when you’re first starting out.

3. The definition of a “return on investment” may vary.

Let’s say one of your fellow business owners tells you they’re seeing a 500 percent ROI. That’s impressive, but where is it coming from? Are they measuring that based on the number of visitors they’re getting from social media? Based on an increase in sales that may or may not have come from the channel directly? To make things even more complicated, are they calculating costs accurately, including the time of the full-time employees working on the campaign? In most cases, ROI is self-reported, so it’s hard to ensure you’re getting an accurate account.

In many cases, the strength of your social media campaign will be dependent on the strength of your efforts in other channels. For example, let’s say you have two companies essentially doing the same thing, Company A and Company B. Company A launches a social media campaign and starts paying $100 a week toward marketing. Company B spends $100 a week on traditional advertising, and starts building an initial client base. After a few months, Company A has made some progress and is breaking even on its social media spend. Company B has a thriving customer base, so they decide to start a social media presence. By the end of the month, both companies have 1,000 followers. By this point, Company A has invested more than $1,000, but Company B has only invested $100—yet their posts are getting a similar amount of reach. This example shows how the numbers can become skewed in favor of brands with big advertising budgets being spent on other marketing efforts, or those with an already-existing audience.