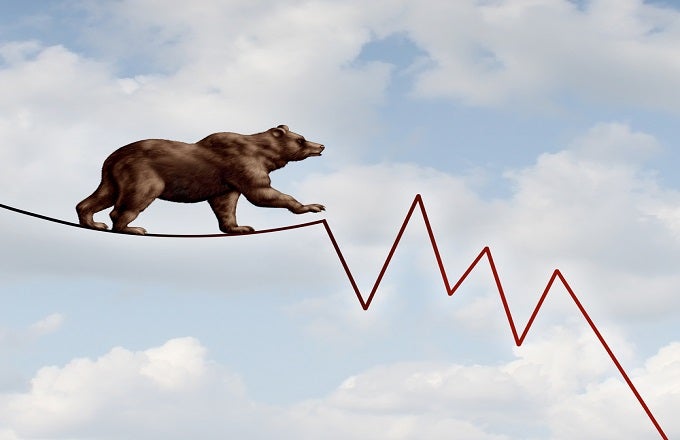 The bull market in stocks has begun its 10th year with largely sideways movement, and investors are understandably concerned about what the future holds. Michael Hartnett, the chief investment strategist at Bank of America Merrill Lynch, recognizes that “asset markets are struggling” and thus he is tilting towards a bearish view, according to ZeroHedge.com. Accordingly, he recommends seven trades to investors. Meanwhile, Callum Thomas, founder of chart-driven macro research house Topdown Charts, writes: “If you thought quantitative easing (QE) was a tailwind for stocks on the way up it stands to reason that it will be a headwind on the way down. So this will be one to watch and a risk to be mindful of.”

Hartnett sees “catalysts” for both bull and bear cases, as quoted by ZeroHedge, observing that the reason for the confusion is “Because it’s late-cycle, profits are peaking, and the Fed is tightening.” The bull market in the S&P 500 Index (SPX) would become the longest ever if it lasts until August 22, while the current economic expansion in the U.S. will be the longest since the Civil War if it continues into July 2019, he says.

Hartnett believes that a true bear market is unlikely to begin in 2018, but suggests that investors start to get defensive. In line with Callum Thomas’ concerns about the impact of an end to QE, BofAML advises rotating from QE winners, such as levered cyclical stocks, to QE losers, such as liquid defensive stocks.

As summarized by ZeroHedge, the seven ways that investors can protect themselves against a market downdraft, per BofAML, are:

The main triggers for a move to the downside for the S&P 500, sending it below the current support level of 2,550 would be, in Hartnett’s opinion, a weakening of GDP and EPS growth, a slowdown in Chinese export growth, geopolitical crises, a crisis in the credit markets, or the “policy impotence” of central banks in trying to suppress the widening of high yield spreads or the increase in volatility.

Anticipating the inevitable onset of the next bear market, Investopedia ran a series of articles in the fall that presented various strategies that investors might employ to protect their gains. These strategies include portfolio reallocation, hedging with options contracts on the S&P 500, and seeking greater diversification, both internationally and regionally. Also, in line with the recent BofAML recommendations outlined above, these suggestions included shorting various stocks and sectors, as well as rotating into higher-quality companies.