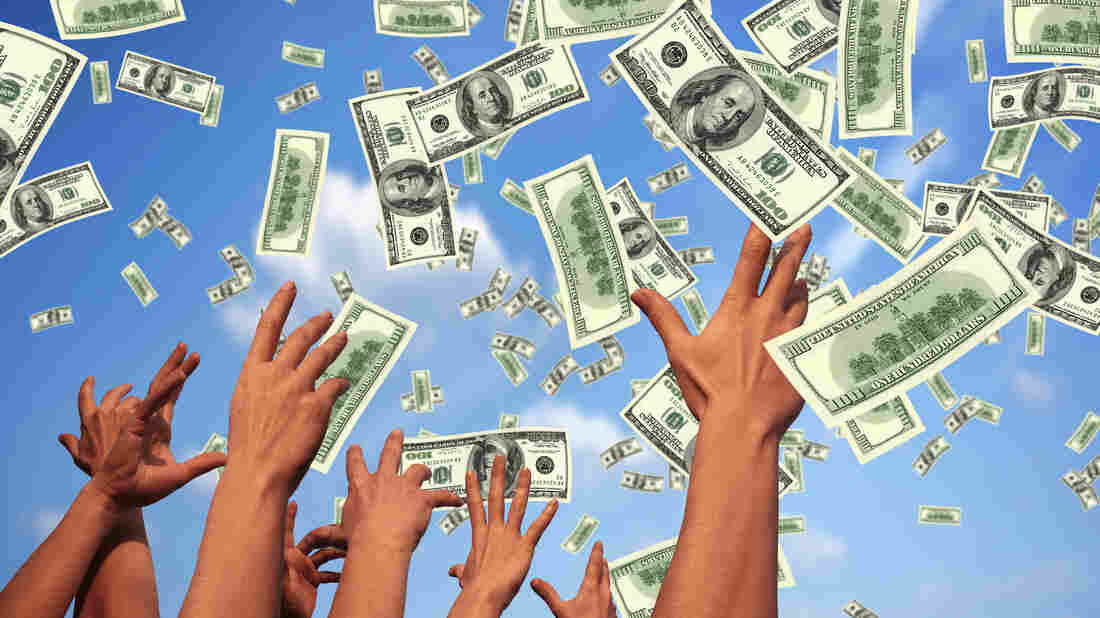 A new company offers regular folks the chance to invest in music. So… is music a good investment?

This week, you may have seen headlines offering you — yes, you! — the chance to buy a slice of Eminem’s royalty pie, with the prospect of making a little profit:

You could understandably get the impression that the famed rapper and one of the most listened to artists in the world was offering shares in his catalog for fans and adventurous investors to speculate on. You would be wrong.

Dennis Dennehy, Eminem’s spokesperson, wrote in a statement provided to NPR that “Eminem is not involved in any deals for the sale of recording royalties and has no connection to this company. The decision to offer the royalty stream for sale or otherwise was made independently by a third party who retains royalties for an early portion of his catalog and Eminem was not consulted.”

The company Dennehy is referring to is Royalty Flow, a new subsidiary of Royalty Exchange, which launched in 2011 and makes money by skimming a cut off the top of auctions offering partial ownership stakes in specific albums, songs and bundled permutations thereof. One current auction, for “Music Used In Sports, Reality & Cable TV Shows,” currently has a bid of $46,750, with documents accompanying it touting a year-over-year revenue growth of 300 percent between 2011 and 2016. The hope, obviously, is that your slice of music history’s royalties will eventually net a profit. On that particular $46,750 auction, the winning bidder would, if its earnings stay at the level they are now, break even in five years and four months.

Royalty Flow was seemingly conceived to simplify this business model for consumers, offering shares in the company itself and, by extension, the collection of catalog slices it will amass. Its proposition to customers is similar (buy low, sell high), but in the aggregate, once it has put it together. As you may have guessed, the first partial catalog they licensed, and the only one announced so far, was Eminem’s.

The piece of Eminem’s catalog that’s being used to sell this new company doesn’t belong to him, though, but to the two producers who first signed him, Mark and Jeff Bass, along with their manager, Joel Martin.

The trio has licensed Royalty Flow to hold 25 percent of its stake in Eminem’s catalog, and hopes to sell shares — at a minimum $2,250 buy-in — directly to potential investors.

They’re able to do this thanks in part to President Obama and the JOBS Act, a law that was designed to jumpstart the economy following the 2008 financial crisis and its harrowing, enduring aftermath. Within the JOBS Act is a rule that allows companies looking to raise a relatively “small” amount of money, up to $50 million, by directly selling equity to consumers instead of requiring the sales to funnel through accredited investors.

The end game, though, for Royalty Flow would seem to be holding a portfolio of various intellectual property securities (“securities” are just financial assets — feel free to call them “things”), whose aggregate value would hold steady long enough to give some benefit to those who invest in them. It’s the same concept as typical diversified investment portfolios.

All of this, of course, begs the question: How good of an investment is a song? Or a few of them?

In a 2013 paper, Rachel Soloveichik, an analyst for the Bureau of Economic Affairs, went through and calculated the depreciation schedule of songs (she did the same for several cultural industries). Dr. Soloveichik found original songs depreciate in value by 50 percent “in the first year of life,” with that decline slowing dramatically afterwards and stabilizing at four percent per year later on. An important caveat is that Dr. Soloveichik’s research was conducted before streaming services like Spotify became the primary revenue driver for recorded music. The long-term effect of permanently “renting” access to music through subscription services, to those without a PhD in economics, is hard to predict. But so is the value of music.

David Bowie’s pioneering work in the field of art speculation is also instructive and serves as a warning that the public’s relationship to media and art can change rapidly. In 1997, Bowie bundled the rights of 287 of his songs into bonds, which he sold and from which he made $55 million. The idea was that the bonds would return a profit after a 10-year vesting period, during which Bowie wouldn’t receive any royalties on the songs he’d put up (having to console himself with the $55 million instead). But in 2004, after the music industry had cratered in the wake of Napster and the iTunes Store, the bonds were downgraded to “near-junk” value. Bowie made out like a bandit — his bond purchasers, not so much.

It may be best to heed Royalty Flow’s own warning:

Investing in shares of Royalty Flow will involve significant risks … Furthermore, investors must understand that such investment could be illiquid for an indefinite period of time. No public market currently exists for the securities, and if a public market develops following the anticipated offering, it may not continue.