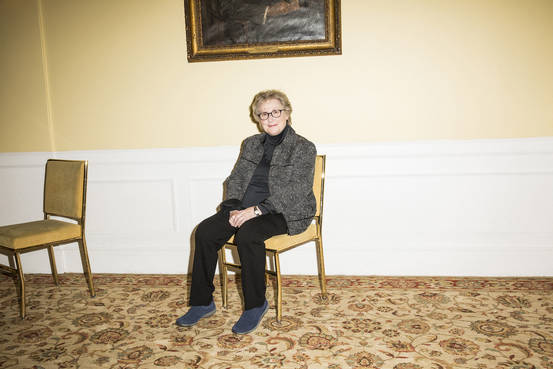 Barron’s: Abby, what have you got for us this year?

Abby Joseph Cohen: I have five selections, all quite different, although there are some characteristics that are similar that will become apparent. These are stocks recommended by Goldman analysts that I have chosen for various reasons.

The first is Occidental Petroleum [OXY]. As we discussed this morning, energy hasn’t been a good-performing industry, yet it is one with high tax rates and will benefit from tax reform. In addition, it could gain from the expected rise in commodity prices. I agree with Jeff that commodities will likely be moving up in price. Occidental, a niche player in the exploration and production industry, has two things going for it: production growth and a notable dividend yield. Production growth typically is about 5% to 8%. It could be even better over the next couple of years. Operating costs look like they might be going down some 10% to 12% over the next few years. The company’s exposure to the Permian Basin will probably be helpful. Its operating performance is improving, and its costs are declining. The final fundamental piece for Occidental is that it has a good presence in midstream chemicals, which is another area where there will likely be some demand and pricing gains. We expect free cash flow to rise; the pre-cash-flow yield, 3% in 2017, is likely to be about 5.6% in 2018 and 5.8% in 2019. The stock trades for $74.55. The current dividend yield is 4.2%.

Scott Black: How’s the balance sheet? It is usually one of the knocks on the company.

Cohen: It’s not the strong point, but something that will be improving. The fact that earnings and cash flow will be improving is helpful. Occidental had a tax rate of 38% to 39%. But that will be going down, which will be helpful. Current cash on hand is about $1.8 billion, and net debt to equity is about 39%. Our analyst isn’t expecting huge price appreciation, but the total return is attractive because of the dividend yield, which is supported by strong cash flow.

Next is Samsung Electronics [005930.Korea]. We talked this morning about some of the markets around the world that have underperformed. Some other emerging markets outperformed South Korea last year. Importantly, Korea is one of the few markets selling below long-term valuation metrics. Other emerging markets, including China and India, look attractive from an earnings-growth standpoint, but Korea is much cheaper.

What is the attraction of Samsung?

Cohen: Samsung sells consumer products and has significant exposure to the semiconductor market. We are expecting strong global demand, which will be favorable for Asian exports. About three-quarters of Korea’s exports are active semiconductors, and Samsung plays an important role in that. As was discussed this morning, we are seeing a tight DRAM [dynamic random access memory] market, which is a good chunk of what Samsung does. The previous concerns about oversupply and pricing on NAND seem to be less significant. Samsung is known not just for semis, but for consumer products. This includes TVs and kitchen appliances and exploding cellphones, but they seem to have that problem under control. In 2018, the price/earnings ratio, based on our analysts’ estimates, is 7.2 times earnings. Price to book value is 1.4 times, the dividend yield is 2.8%, and the return on equity is in excess of 20%.

Black: Abby, how do you factor in the political situation on the Korean peninsula?

Cohen: That has been problem not just for Samsung but the whole Korean market. There is also a restructuring issue among Korean companies. The Japanese went through this a long time ago with cross-holdings, plus shareholdings. They had their own issues in terms of family-led conglomerates. There are always internal political pressures, as well, and there have been domestic political issues within South Korea. All of that contributes to why that market hasn’t performed all that well, but Samsung is primarily an export company.

Last year I selected a small biotech company [bluebird bio (BLUE)] that has tripled in price, as I recall. This year I’m going for something large. It is steady and has a dividend, which might be an important way to participate. The company is AbbVie [ABBV]. It has a strong pipeline and an interesting cash-deployment story. Over the next 10 years or so, we think it will generate about $180 billion in free cash flow. Of that, $110 billion is currently unallocated either to dividends or announced share buybacks, so management has some options.

AbbVie also has an attractive free-cash-flow profile relative to some competitors, because it doesn’t need to spend as much on capital expenditures, in part because it has already done that. AbbVie has a strong pipeline, primarily in oncology and also autoimmune. In autoimmune, its drugs are No. 1 for psoriasis, No. 1 for rheumatoid arthritis, and right up there with a Crohn’s treatment. Those are the three major autoimmune disorders. There is proven visibility on Humira, which is the drug that the company is well known for. But it is the underappreciated pipeline that has these best-in-class drugs in autoimmune and oncology that aren’t well-appreciated.

What are the shares priced at?

I’m going to go back to Asia—this time, to China. The company is China Railway Signal & Communication [3969.Hong Kong]. It trades for 6.31 Hong Kong dollars [81 U.S. cents.] In 2015, the state-owned enterprise in China that was in charge of rails split into two entities. One is the hardware, the rolling stock. The one I’m discussing is the smaller chunk, signaling and communications. This fits with the long-term China story about increasing infrastructure, but also their plan to assist other countries in expanding their infrastructure. This is a significant part of the Chinese charm offensive. China is making friends with neighbors and others by providing know-how.

What is the bullish case for China Railway?

Cohen: There is a need to build transport systems and, in some cases, reconfigure them. CRSC provides new systems and has a tailwind from the replacement cycle.

For those who live in New York, you know that rolling stock lasts a long time—longer than the signal systems. Basically, rolling stock can last decades, signaling systems eight to 12 years. The company already has a replacement cycle under way for some of the systems installed a few years ago. The breakdown of business: 80% is rail and 20% is construction, in which CRSC keeps track of equipment and the movement of things. Because the company has already invested heavily, some of its free cash flow might support a higher dividend than it currently pays. The expectation for analysts is that this stock will perform well because of growth in sales and earnings, along with a P/E rerating.

Sales growth estimated for the year just ended was about 23%; the forecast for 2018 is in excess of 30%. We estimate the earnings growth for last year at 20%, and for this year at 25%. It has an ROE of 15%. The current dividend yield is 1.8%. If the current P/E of about nine times rerates, it could head toward those of other signal companies that trade closer to 11 to 12 times. Currently, 90% of CRSC’s business is domestic, but China has its eye on increasing exports, and there are possible new projects already under discussion in Indonesia, Singapore and Malaysia, Hungary, Russia, and Thailand.

Cohen: I’m coming back to the U.S., to a company whose stock has been sort of unloved—Mondelez International [MDLZ], originally Kraft. It went through all kinds of iterations, most recently a restructuring under Irene Rosenfeld. She is handing over the baton, but leaves an interesting legacy, and a strong foundation. Mondelez is at an inflection point that should see it performing in a much better way. It makes lots of products we all know, lots of snack foods. Who doesn’t love Oreos? Results might have bottomed in 2016. If you look at the snack-food business, you have to look at volumes and pricing. Pricing began to improve in 2015. In 2016, you begin to see glimmers of hope, not just in pricing, but also in volumes, that picked up substantially in 2017.

When you compare sales growth to some other types of companies discussed today, including Henry’s, it doesn’t sound like much. We are talking about 3% sales growth, but in the food business that isn’t bad at all.

Oscar Schafer: Aren’t these major packaged-goods companies losing share to private label? It just seems that their growth is slowing.

Cohen: It depends how they distribute, but a lot of them are doing the private labels themselves. Mondelez has a lot of international distribution, which some others don’t. For example, markets in Brazil, which had been hurting, have come out of recession and are doing better. To the extent that consumers are doing better, which was one of the first things we discussed this morning, and that economic growth is improving, middle-class incomes are rising, and that people are feeling better, they are spending money on snack food. I don’t know if it’s good for them health-wise, but they are spending.

Who is the new CEO?

Cohen: The new CEO is Dirk Van de Put, and he has described his role as fine-tuning. Most of the big changes have already occurred, and they are just waiting to do the final implementation.