Boy, Nintendo sure knows how to pack a lot of news into 45 minutes of livestreaming video. (You can watch it directly above.) 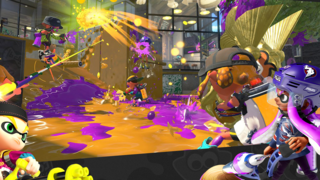 The evening’s Nintendo Direct led with a slew of 3DS game and hardware news before kicking straight into the Switch, new games, new toys and much more information about Super Mario Odyssey.

We’ve rounded up the best bits in the summaries below and then summarized everything else in one giant post for you to peruse at your own pleasure.

The Best
Square Enix Has a Beautiful New Game
We don’t know a ton about Project Octopath Travelerother than that it is absolutely gorgeous, is a brand new role-playing game from Square and you can play a demo of it right now on your Switch. Well? What are you waiting for?

Nintendo Arcade Games Are Coming to the Switch
That’s right. Those few games that popped up in arcades that were made by Nintendo are actually now going to be playable on the Switch. We got a partial list, one release date and no prices. But still: Good news!

Holy *(&@!
After surprising folks with news that they were bringing Skyrim to the Nintendo Switch, Bethesda blew off some doors tonight with news that they’re also bringing Doom and Wolfenstein II: The New Colossus to the Switch. Only Skyrim has a date so far.

Colorful New New 2DS XL
Soon you’ll be able to buy a New 2DS XL that is the same color as my favorite seasonal Starbucks coffee. Also, there’s another coming that looks like a Poke-Ball.

‘Super Mario Odyssey’ Gameplay, Bundle, Amiibo
The main act of the evening was, of course, the hotly anticipated Super Mario Odyssey. The Nintendo Direct wrapped up with a lot more gameplay showing off a lot more locations, story and modes. We also heard about a new Switch bundle for the game and dates for three wedding-ready amiibo.

That seems like a lot of news doesn’t it? In fact, that was just a tip of the 45-minute-long speedrun Nintendo Direct. Below you’ll find the rest of the news tidbits, scrapped from Nintendo’s own press release.