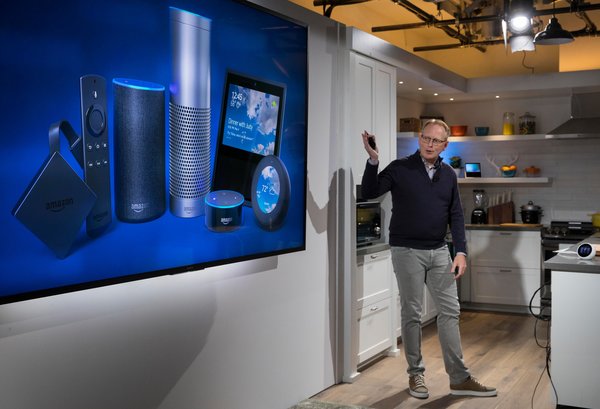 SEATTLE — Amazon released the first Echo smart speaker three years ago, not long after the company’s attempt at a smartphone proved to be a humiliating failure.

So far, the results for the Echo have been anything but humiliating. Now, having grown more confident that it understands the fickle market for consumer products, Amazon is making it clear that the Echo and other hardware powered by Alexa, the intelligent assistant behind the devices, present the company with one of its brightest opportunities.

On Wednesday, Amazon introduced an array of new Alexa devices that are smaller, less expensive and, in some cases, built for specific areas of the home, including an alarm clock, Echo Spot, that is designed to sit on night stands and desks.

Amazon prides itself on its almost pathological focus on what its customers want, rather than what its competitors are doing. But its new Alexa products are clearly a response, at least in part, to new smart speaker offerings from Google and Apple. Amazon is betting that it can defend its franchise by using an old trick — aggressive pricing — and by finding ways to embed Alexa’s hooks more deeply into customers’ lives.

If the strategy works, Amazon could gain an edge in a new wave of computing. Most big technology companies are convinced that voice commands and intelligent assistants will be primary ways that people interact with technology, perhaps more vital than touch screens and keyboards.

David Limp, Amazon’s senior vice president of devices and services, said Wednesday that the company had about 5,000 employees working on Alexa projects. The company held its event on the 30th floor of one of its high-rise buildings in Seattle, where it had created a living room and kitchen to test how the Alexa devices worked in a homelike setting.

The company has identified music, communications and controlling smart home appliances as the most popular uses of Alexa. Although Amazon has not released specific sales figures for Alexa devices, Mr. Limp said tens of millions had been sold.

“They’re literally scattering them around the house, putting them in hallways, workshops and garages,” he said.

Echo Spot, a $129.99 spherical device with a 2.5-inch touch screen, is Amazon’s version of an alarm clock. In addition to displaying the time and weather, its microphones will allow people to make phone calls, turn lights on and off and ask how long a morning commute will take. A tiny camera makes videoconferencing possible.

The device, and its camera, could also provide a test for Amazon. Whether customers feel comfortable having a camera aimed at their beds will depend partially on whether they trust Amazon to protect their privacy.

Also introduced Wednesday was an updated version of the original, cylinder-shaped Echo. The new iteration is shorter, with sleeves made of fabric, wood veneer and other materials that allow it to blend in better with the rest of a home’s décor. The company said it had improved the device’s speakers as well. The biggest change is the price: $99.99 instead of the original Echo’s $179.99.

Another new device, Echo Plus, resembles the original Echo, but comes with technology that helps control certain household devices like light bulbs that are automated. Echo Plus, priced at $149.99, is designed to find many of those automated devices with little configuration required.

A new version of Fire TV, the company’s device for streaming internet video to televisions, is small enough to dangle from the back of a television’s video port. Amazon said that media companies including Bravo, Netflix and Showtime planned to use a new Alexa capability that lets people use voice commands to control Fire TV video apps.

Amazon also said that BMW Group had agreed to embed Alexa in its BMW and Mini Cooper vehicles starting next year, the latest in a series of relationships that Amazon has entered with carmakers to spread the use of Alexa outside the home.

Jan Dawson, an analyst at the technology research firm Jackdaw Research said he believed Amazon’s goal was to strengthen the loyalty of its customers, especially those enrolled in its Prime membership program.

“Overall, today’s announcements felt like Amazon doubling down on its Echo and Alexa strategy,” he said, adding that the company was “reminding all of us that it doesn’t necessarily need to make money on Echo hardware for the strategy to be successful.”

Mr. Dawson said the strategy created “interesting competitive challenges for others like Google and Apple who don’t have such obvious non-hardware revenue streams associated with their smart voice speakers.”