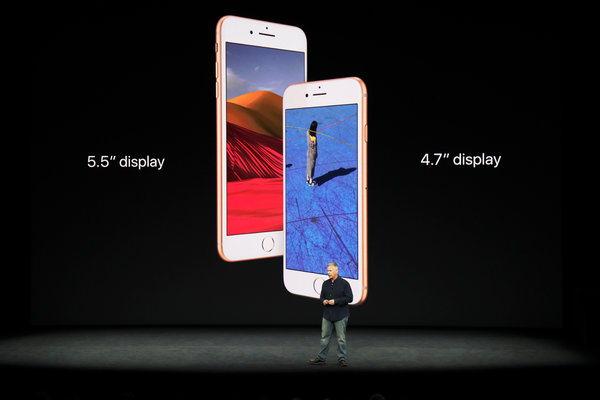 • Apple unveiled iPhone X, its first premium-tier iPhone. (Pro tip: The X is pronounced 10, and not “ex.”) It has a newer screen technology known as OLED, a type of display that can be made thinner, lighter and brighter with better color accuracy and contrast than its predecessor, LCD.

• iPhone 8 is here, as well as its bigger sibling, the iPhone 8 Plus. The models include a glass body and come in three colors: silver, space gray and gold. The new iPhones also have a tougher glass face and a faster chip.

• Apple TV, the company’s set-top box that has never been a blockbuster hit, got an upgrade. The device will now be able to stream so-called 4K resolution, which refers to screens with two times the vertical resolution and twice the horizontal resolution of older high-definition TVs.

• Timothy D. Cook, Apple’s chief executive, presided over the iPhone event at the new Steve Jobs Theater at the company’s campus in Cupertino, Calif. Mr. Cook said the new auditorium was named after the Apple co-founder because “he loved days like this.”

• To watch the Apple event live on Safari, iOS devices or through Microsoft Edge on PCs, use this link.

• If you have questions about the new models, send them our way. Brian X. Chen will be answering some of the most notable entries.

The iPhone 8 and 8 Plus can handle more complex tasks.

The new iPhone 8 line includes the iPhone 8 and its bigger sibling, the 8 Plus.

The phones include a six-core processor that will handle more complex tasks and 3D games more quickly and efficiently than previous iPhones. The phones generally look the same as their predecessors, the iPhone 7 and 7 Plus, with the exception of glass bodies, as opposed to aluminum.

Apple improved the phones’ cameras with new sensors and added new motion sensors to better support applications made for augmented reality, which use data to digitally manipulate the physical world when people look through a smartphone lens.

In particular, the dual cameras in the iPhone 8 Plus take photos with sharp details in low light. Apple also added a new portrait mode to improve the lighting on faces regardless of the background.

Another notable new feature is the introduction of magnetic induction to the iPhones. Similar to Apple Watch, the iPhones can now be charged by being placed on a charging pad as opposed to being plugged in with a cable.

The new iPhone 8 line will be one of the most important for Apple. Wall Street analysts have estimated that more than half of iPhone buyers will buy the 8 and 8 Plus over the next year. The models have a slightly higher starting price than their predecessors: The iPhone 8 starts at $699, up from $650 for older iPhone models.

Apple unveiled an upgrade for Apple TV, its set-top box. While Mr. Jobs referred to Apple TV as a “hobby” because it was not a hot seller compared to the company’s smartphones, computers and tablets, the product is becoming increasingly important to Apple as it, along with other tech giants like Facebook and Google, moves into creating original video content.

The new Apple TV, called Apple TV 4K, it is an iteration of the last model, which introduced a touchpad remote control. The new box will now be able to stream so-called 4K resolution, which refers to screens with two times the vertical resolution and twice the horizontal resolution of older high-definition TVs. Eddy Cue, Apple’s head of internet software and services, added that 4K titles would cost the same to rent as traditional high-definition titles. The set-top box will cost $179.

Apple said the new Apple TV 4K is also two times faster than the last one and includes support for a new color technology called H.D.R., or high dynamic range. This software feature enhances the contrast and color profile of a picture. In bright colors, you will see brighter highlights; in dark colors, you will see more details.

Apple Watch can now work without an iPhone.

The Apple Watch has been a sleeper hit for the company. Though early reviews were mixed, Apple has steadily improved the device, and now the smartwatch is the best-selling watch in the world, according to Apple.

Today, Apple unveiled the third version of the device. It looks identical to the old version, but the new one carries a much-requested feature for the first time: It will come with a cellular chip, meaning it can access the internet even if it isn’t connected to your phone. Among other capabilities, the cellular version can make calls, send texts and stream music when you’re on the go.

“Now you have the freedom to go anywhere with just the Apple Watch,” said Jeff Williams, Apple’s chief operating officer.

The cellular version completes a long-term vision for the Watch — to liberate you, in some small way, from Apple’s best-selling phone. In a demo, an Apple employee made a live call to the keynote address from a paddle board in the middle of a lake.

This is a slightly risky strategy, of course; Apple doesn’t want to kill its golden iPhone goose. But the new cellular watch is unlikely to be a replacement for the phone, just a high-priced complement.

Apple’s new corporate campus is a sight to behold.

Apple is set to unveil several new gadgets later this morning, but the highlight of today’s event isn’t something you can buy. It’s Apple Park, the company’s new $5 billion spaceship-shaped campus, which the company is showing off to the media for the first time.

The press were penned off just out of range of the main building, at the Steve Jobs Theater, the 1,000-seat venue with a commanding view of the spaceship. A quick review: This place is just what you’d imagine an Apple-designed campus would look like. Think of the aesthetics of an Apple Store — lots of wood and glass, everything in muted tans and greys, all signage in white-on-black Apple Sans type — set on an otherwise barren landscape.

It is, unsurprisingly, very pretty, but its beauty comes with a deliberate touch of fright. Nothing here is to human scale, and the overall impression is one of being overwhelmed by Apple’s sheer might.