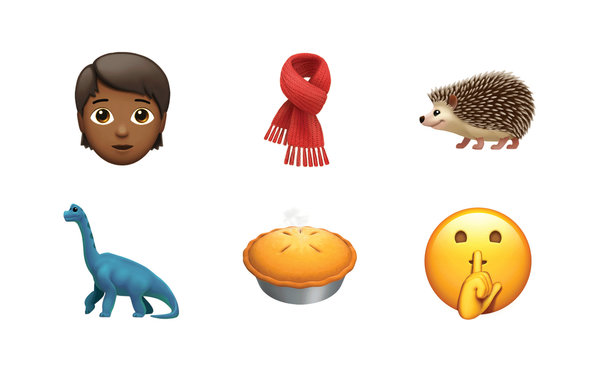 An angry, cursing face. A head of broccoli. A “Citizen Kane”-style sled. A black mountain climber. A genderless person, available in a range of races and ages.

First announced on World Emoji Day (yes, apparently, that exists) in July, hundreds of new emojis will be available next week on iPhone and iPad with iOS 11.1, Apple said on Friday.

Emojis, colorful and playful pictograms that are available on a range of devices, have altered the way humans communicate with one other and have become a powerful force in pop culture, both online and off.

Hillary Clinton tried to use emojis to reach out to young voters during the 2016 campaign. Last summer, Sony Pictures released a movie that imagined emojis’ inner emotional life. (Neither the campaign nor the film was a success. The real-world track record of emojis is not great.)

Nevertheless, emojis have provided a cheeky visual shorthand for such common experiences as laughing, vomiting and, with the latest update, the desire to reference a hedgehog in everyday conversation.

The latest update appears to continue a yearslong trend toward greater diversity among emojis, which began in earnest in 2015, when Apple allowed users to select the skin tone of most of the human pictograms.

The company said in a statement that the new emojis were “designed to reveal every detail” and were adopted from approved characters used in earlier updates.

Among the options announced on Friday were a woman in a head scarf, a woman breast-feeding, and what the company called the love-you gesture, which it said was designed after the sign for “I love you” in American Sign Language, which combines the signs for the letters I, L and Y.

So, how does a new emoji find its way to your screen? The process is complicated enough that it might make you feel like a smiley face with a nuclear mushroom cloud erupting from your head. (Yes, that is one of the new ones.)

The process is shepherded by the Unicode Consortium, a little-known group that meets quarterly and includes executives from several large technology companies, including Apple and Google.

The consortium was founded in the 1980s to develop a standardized code for text characters — including letters, numerals and, in the present day, emojis — that enables different computers easily to communicate with one other.

The Unicode Consortium’s co-founder and president, Mark Davis, 63, described how the group chose emojis in an interview with The Times in 2015.

Among the factors he cited for inclusion were whether the symbol had been translated into Unicode, and how likely it was to be popular or useful.

“Completeness” was also an influential factor, he said, citing the addition of a mosque and a synagogue to the emoji lexicon that had already included an image of a church.