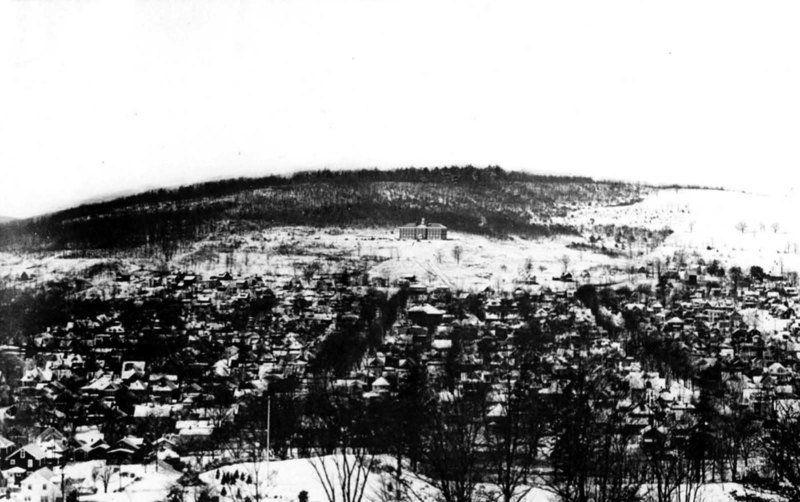 If January 1928 was compared to a faucet, and what came out was new local buildings and inventions, that faucet was opened to full blast.

With the decision made that a new college campus would be built in Oneonta, The Oneonta Star reported on Jan. 11, “Dwight James Baum of New York city was yesterday selected as architect of Hartwick college campus and grounds, in accordance with tentative plans which he submitted to the trustees of Hartwick seminary in session in Oneonta, who will form with others to be selected the board of trustees of the college.”

Local residents could take a look at the drawing Baum had made, simply by looking in the Bresee’s Oneonta Department Store window, downtown. Baum was a busy man at the time, as the news article said he had been commissioned to “transform the campus at Syracuse university and notable has been the progress.” He was also developing plans for a psychiatric hospital adjacent to that campus, as well as a YMCA building on New York City’s West Side.

“Extended description of the proposed campus and the buildings suggested, seven in number, necessarily awaits final approval by the trustees of the college, yet to be organized.” With The Great Depression not far in the future, followed by World War II, the 1928 plans were never executed, once the campus began expansion after the war.

A ‘VISION’ WAS FIRST DEMONSTRATED IN NEARBY SCHENECTADY

“The magic wand of science, passing over the factory of the General Electric company here, disclosed to a small group of radio engineers, scientists, and newspapermen, a vision of the future of radio broadcasting — a future designed to bring to broadcast fans the sight as well as the sound of the radio performers,” Star readers learned on Jan. 14.

“Sitting in comfortable chairs in three Schenectady homes, several miles from the company’s broadcasting studio, the visitors were enabled both to see and hear the studio program. Simple twists of the dials on the ‘home television sets’ brought to these men the most minute reproduction of the characters who appeared before the microphone, even to the curl of cigaret smoke from their lips and the blinking of their eyes.”

Commercial sale of this new invention, not to mention regular programming, were still several years in the future. WRGB-TV traces its roots to this experimental broadcast.

A COMMON DEVICE IN THE HOME GOT EVEN BETTER

Members of the Oneonta Kiwanis Club were given a demonstration of a new device at their luncheon meeting at the Oneonta Hotel on Jan. 11.

“Harold P. Seeger, a former Oneonta High school student, was the speaker of the day. He is now employed by the Victrola Talking Machine company. He displayed a Victrola and an automatic electrola. After demonstrating the Victrola he played several selections on the electrola, which registered from a whisper to a full orchestra, in addition automatically placing the record on the playing surface and then removing it and placing it back in its compartment. This was a marvel to all present. The built in Radiola feature is of the latest type, all enclosed in a beautiful cabinet,” according to The Star the next day.

MAIL DELIVERY WAS MADE BETTER BY A LOCAL INVENTOR

“William E. Palmer, 329 Chestnut street,” The Star reported on Jan. 31, “has just obtained a patent for a device to be used by mail trains to take on and leave mail while the train is moving rapidly.

“The method now used by the railway postoffice in taking on mail while the train is under motion, consists of an arm attached to the car which strikes the mail bag in the middle tearing it from the standard beside the track. When it is desired to throw mail off a moving train, the bag is merely thrown on the ground where in many cases much damage is done to the mail and a danger incurred of derailing the train.

“Mr. Palmer’s device permits both the taking on and leaving of mail in a much gentler fashion and without the danger of damage to the contents of the mail bag or to the train.”

Palmer had gotten the idea from his 18 years of working on both the D&H and New York Central railroads. Palmer was working on a plan to market the device at that time.

On Monday: The area reacted to a triple combo of national and world events in late January 1968.

Oneonta City Historian Mark Simonson’s column appears twice weekly. On Saturdays, his column focuses on the area before 1950. His Monday columns address local history 1950 and later.  If you have feedback or ideas about the column, write to him at The Daily Star, or email him at [email protected]. His website is www.oneontahistorian.com. His columns can be found at www.thedailystar.com/opinion/columns/.

Have you ever had a question about a history-making event or a prominent person in our area and didn’t know where to find the answer? Well, we’ve got an expert who might be able to help you. Historian Mark Simonson has spent many years chronicling major local happenings, and he’s ready and willing to dive into The Daily Star archives for answers, which will appear in this newspaper and online at www.thedailystar.com.