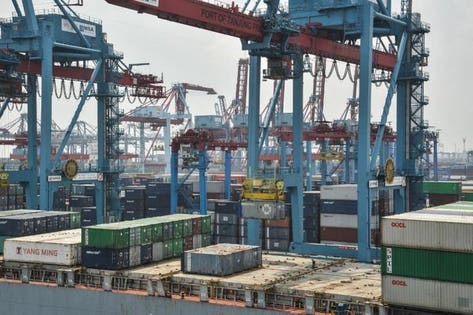 Cargo loading at Port of Tanjung Priok in Jakarta, Indonesia on April 22, 2018. This is Indonesia’s busiest, biggest and most advanced seaport with more than 50% of trans-shipment cargo traffic. BlackRock has it as a favorite play to&nbsp;weather the storm in an eventual global trade war. (Photo by Anton Raharjo/NurPhoto via Getty Images)

Trade wars got you down? Don’t panic, buy Indonesia. The market there is down over 13% and getting&nbsp;beat up by the benchmark MSCI Emerging Markets Index, but BlackRock thinks it does okay during a global trade war.

“India, Indonesia and Brazil are all relatively closed economies with strong reform agendas in each country, accelerating economic growth profiles, strong earnings growth and attractive valuations relative to&nbsp;their peers,” he says.&nbsp; India’s earning growth is around 21%; Indonesia’s 17%; and Brazil is 14%.&nbsp; “These countries offer a tactical shelter amid global trade worries,” he says, adding that their reform agendas could help the bull case for an emerging market equity portfolio.

BlackRock owns the iShares family of exchange-traded funds. Each country has its own ETF at BlackRock.

Of the three, Brazil is the most susceptible to trade wars. On Wednesday, the Trump Administration said it was done negotiating steel tariffs with Brazil. The country will be put on a quota system and have to pay higher duties for steel it exports over that quota. Brazil is a top three supplier of steel into the United States.

Moreover, Brazil is also going through an election cycle. There is no clear front-runner, and if politics plays out against the grain, ex-president Luiz Inacio Lula da Silva could conceivably be allowed to run for office for the third time. This is unlikely. He is in jail for corruption in the Petrobras cases toppling senior executives and politicians nationwide, but given the shock value politics have played in the markets, from Brexit to Trump, there is no such thing anymore as “no chance”.

India is not a big supplier of steel and aluminum to the U.S., but will also face tariffs. Still, like the other two countries, their economies are growing and supported by local demand.