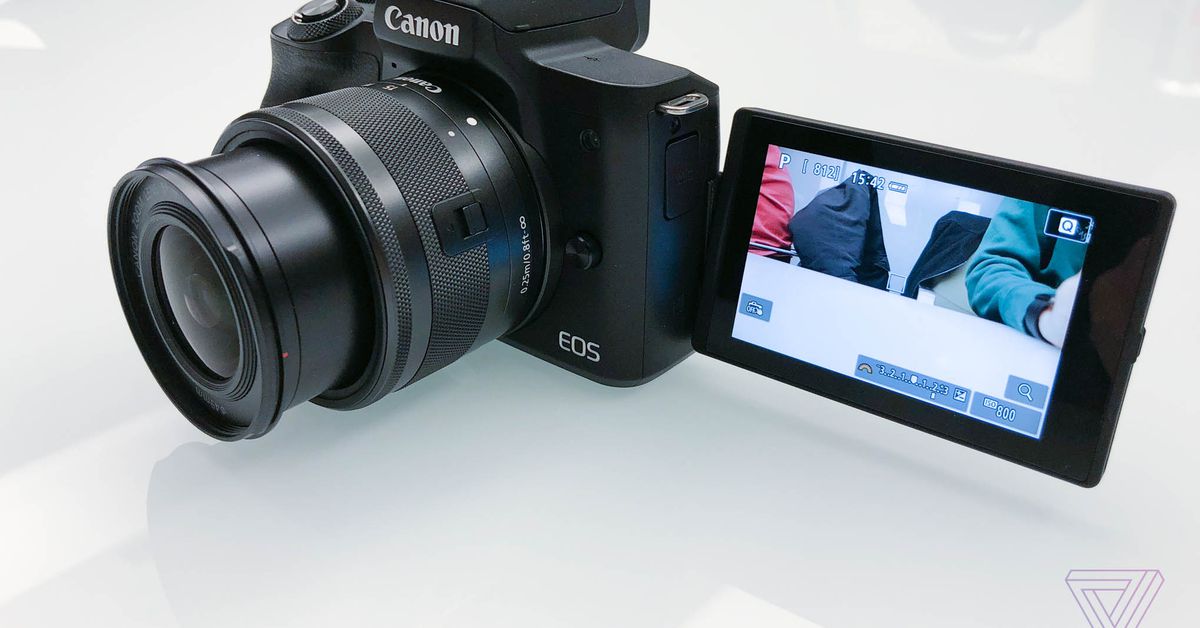 Canon is finally embracing 4K video with a new mirrorless camera called the M50. The petite shooter is, essentially, 2016’s Canon M5 with fewer dials and buttons and a more streamlined body. But the upgraded internals and a swivel-out screen mean this will be the company’s most video-friendly mirrorless camera to date when it ships in April.

The $779 M50 uses a 24.1-megapixel APS-C sensor that’s a hair smaller than the 24.2-megapixel one found in the M5. Despite that, the camera is capable of doing more, and should capture better images in low light, Canon claims. This is thanks to the fact that the M50 employs a brand new version of Canon’s image processor, the DIGIC 8.

Beyond adding 4K capability, one thing vloggers and videographers (and even I) didn’t like much about the M5 was that the screen only flipped out and down. Canon has changed that on the M50, too. The screen now swivels out to the side and can flip around 180 degrees, making it easy to point in all sorts of directions, and ensuring that it won’t get blocked by a tripod.

One thing that bothered me the most when I reviewed the M5 was that the build quality felt a little cheap. The camera was loaded with plastic, which made the camera rattle a bit any time I snapped off a sequence of high-speed shots. The M50, during a brief demo, seems to have resolved this. (There’s also now a silent shooting mode.) The new body feels more cohesive and is covered in a different material that is not as slick to the touch. It more closely resembles the material of some of Canon’s other mirrorless cameras, like the M6, but with more refinement. It’s simply a nicer camera to hold in your hand.

The M50 has the same built-in viewfinder as the M5, which is sharp and small. It also has the same touch-and-drag feature for moving the autofocus points around while you’re peering through that viewfinder. There are more autofocus points inside the M50 — 143 to the M5’s 49. But there’s a catch: with some lenses, only 99 AF points will be active. Only certain lenses are able to use all 143 AF points. Still, the M50 uses Canon’s fast Dual Pixel CMOS AF, so 99 points should be plenty for most situations. There’s also a new “eye detection AF” mode that can automatically lock focus to a subject’s eyes.

The DIGIC 8 processor also enables a whole new raw file format from Canon. Raw images shot on the M50 will now be saved with a .CR3 file extension, and the biggest initial change that comes with it is that the M-RAW and S-RAW options are now gone. These were lower-resolution “medium” and “small” RAW format files that took up less space than a full RAW file, at the cost of maximum resolution.

These options have always offered the flexibility of a RAW file while allowing a photographer to fit more photos on a single memory card. Canon’s replaced them with something called “C-RAW,” which is a RAW file that has the same amount of resolution as M-RAW but takes up about 40 percent of the space. Canon likens it to getting M-RAW resolution at S-RAW file sizes. Whatever the case, both it and DIGIC 8 sound like marked improvements. Canon wouldn’t say when either one will be adopted by other new cameras.

Another new feature on the M50 is that it can instantly beam every photo you take to your phone. Canon’s had a mobile app for a few years now, and it’s a good way to pull pictures (individual or multiple) off the company’s cameras without having to deal with cables or fumbling with moving SD cards around. The new option, though, is similar to the always-on transfer mode that Nikon pioneered with its Snapbridge feature. It allows the camera, when connected to the Canon mobile app, to send either compressed or full resolution JPEGs of every photo you take to your smartphone. It’s not the right kind of feature for every scenario, but I’ve found it to be really useful on Nikon cameras in certain settings, and it’s a welcome addition to Canon’s mobile app.

With the M50, Canon’s also updating its desktop backup software. The new version, simply called Image Transfer Utility 2, will let the camera start sending photos over to a computer as soon as it attaches to a user’s home Wi-Fi network.

Canon spent years dragging its feet in the mirrorless camera space before releasing the M5, which felt like the company’s first serious stab at this slice of the market. But it still had glaring omissions, like the ability to shoot 4K video, and a more free-moving touchscreen. The M50 remedies those, though some users will certainly be upset that 4K is locked to 24 frames per second, or that 120 frames per second isn’t available when shooting full HD. It should also be noted that, when shooting 4K, the camera reverts to contrast autofocus instead of Dual Pixel.

Point is, it seems like Canon has taken another solid step forward with the mirrorless M50. And it’s undoubtedly going to be a powerhouse for stills. But the company’s still not offering the kind of broad versatility that videographers can find from other companies.