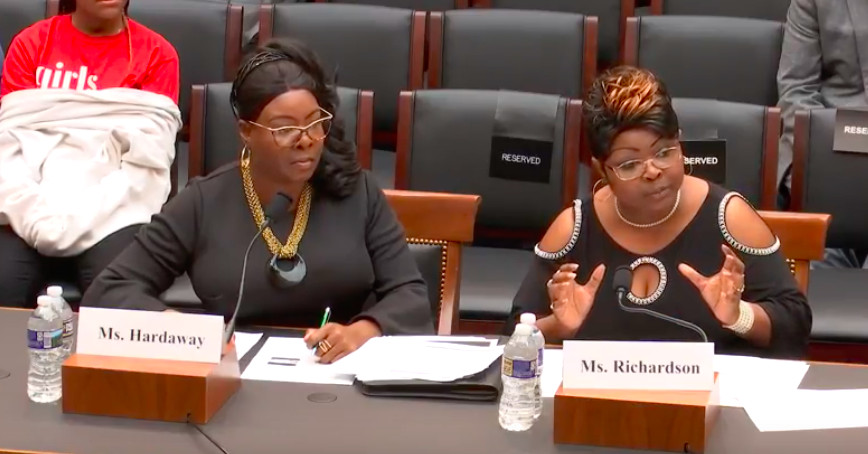 Nobody expected great things out of today’s House Judiciary Committee hearing about social media platforms censoring conservatives. The hearing came on the heels of Congress’ multi-day session with Facebook CEO Mark Zuckerberg, where lawmakers exhaustively asked about the issue. Claims about large-scale censorship are basically unfalsifiable, and none of the tech companies invited even showed up. The whole thing looked potentially like a soapbox for vloggers Lynnette “Diamond” Hardaway and Rochelle “Silk” Richardson, who were invited to the hearing alongside a few policy experts.

But the social media hearing was not just bland or tedious. It was depressingly, almost deliriously bad: full of bad arguments, bizarre tangents, and a lot of shouting.

The hearing’s opening statements, by Chairman Bob Goodlatte (R-VA) and Rep. Jerry Nadler (D-NY), set the tone for the next few hours. Goodlatte spoke portentously about the power and responsibility of social media platforms, invoking quotes from both Ronald Reagan and Mark Zuckerberg. Nadler, the committee’s ranking Democrat, was annoyed. “The central thesis of this hearing doesn’t hold up under even the most basic scrutiny,” he protested. “This committee can do better.”

Republican lawmakers like Rep. Louie Gohmert (R-TX) spoke vaguely in favor of bills to make companies “liable” for their actions, while admitting that private companies could police platforms however they wanted. A few brought up Section 230 of the Communications Decency Act, the safe harbor rule Senator Ted Cruz (R-TX) badly misinterpreted during Zuckerberg’s hearings. Most Democrats were either wearily contemptuous of the proceedings, or asked panelists unrelated questions about Cambridge Analytica and bot regulation. “This is a stupid and ridiculous hearing. The only reason I’m still here is I want to enter some facts into the record,” said Rep. Ted Lieu (D-CA), plausibly speaking for a large chunk of the committee.

For Republicans, the day was mostly an excuse to lecture Silicon Valley and heap praise on Hardaway and Richardson, albeit not always accurately — Rep. Steve Chabot (R-OH) addressed a question at one point to “Diamond and Spice.” It’s really not clear what transpired between the vloggers and Facebook’s policy team, and a ThinkProgress analysis found that their traffic dips were probably tied to broad algorithm changes. But the company’s letter dubbing them “unsafe to the community,” even if it was completely retracted, sounds plausibly sinister.

Diamond and Silk escalated this complaint into a sweeping conspiracy where Mark Zuckerberg interfered in the 2018 elections (we’re not sure which ones) by manipulating conservative users’ advertising preferences so they’d be targeted with liberal ads. They proceeded to get into shouting matches with various committee members, as representatives pressed the pair about receiving money from the Trump campaign — something they claimed under oath had never happened, before admitting that they’d been reimbursed for plane tickets. “We can see that you do look at fake news,” Richardson sneered at Rep. Hakeem Jeffries (D-NY), when he read out a line from an official Trump campaign finance filing, stating that Diamond and Silk had been paid for consulting. “Are you calling this FEC document fake?” Jeffries asked.

Severaloutletshavechronicled the false or dubious statements Diamond and Silk made under oath during the hearing. They’re characterized as lying in some stories, and at the very least, they seemed indifferent to being particularly accurate. At one point Hardaway complained about people saying Facebook was a private company and not a public utility, because “they went public in 2012” — referring to the company going public on the stock market.

After nearly two and a half hours, the Judiciary Committee’s YouTube stream froze, cutting off the end of the hearing. Business Insider reporter Joe Perticoneposted a picture of panelists sitting in front of a nearly empty row of desks, saying that only one committee member was still listening. The truncated video is now online, along with copies of panelists’ testimony, and we know the same things we did this morning: Facebook, Twitter, and YouTube have inappropriately banned or restricted some conservative material, but there’s little evidence that they’re singling out conservatives rather than making mistakes across the board.

Beyond the able testimony of TechFreedom president Berin Szóka, NYU Law professor Ari Waldman, and News Media Alliance CEO David Chavern, the finest thing to come out of this hearing was a beautiful vision for social media’s future, delivered by Rep. Lieu:

Ted Lieu: “Let’s say they want to write an algorithm that promotes cats. Can the government stop them from doing that?”

Lieu: “And let’s say Facebook figures out, you know, promoting cats gets a lot more people to sign onto Facebook than promoting Diamond and Silk. Can the government intervene and stop Facebook from doing that?”

Lieu: “And let’s say Twitter figures out, you know, we’re going to promote nice, cuddly images of furry animals rather than dismembered body parts. Can the government say you can’t do that?”

Mr. Lieu, please sponsor a funding bill for this new cat-only internet. The world will remember you as a hero.