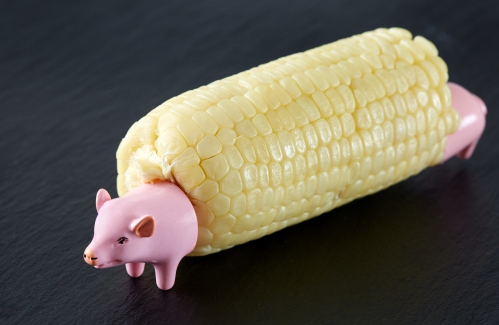 Do people think their hands are going to fall off when they touch an ear of corn? Because that is the only explanation for the staggering number of products designed to help us eat it.

You can butter it with special knives or curved butter holders or even the Butter Boy, a cute little guy that holds your butter in place. And once you’re finally ready to eat the corn, you can put it on your corn-shaped plates and insert your corn prongs, little handles that are probably shaped like miniature ears of corn. If you eat it on the cob, you can put it in a corn-shaped grilling cage or a corn-shaped microwave dish. There are special circle-shaped brushes to help you remove the silk. If you want to take the kernels off, too, there are more than a dozen devices to help: razors that remove rows of kernels as though they were hairs, cutters that trap kernels in bubblelike compartments, tonglike implements that take off all the corn at once.

Or you could just use a knife to butter it, and hold the cob with your hands once it cools down a little bit.

Americans love stuff, and Americans love corn, and both are inherently bound to the American story. We are the world’s largest producer of corn, and the average American will eat a little more than five pounds of it every year, mostly canned or frozen. Our cultivation of corn, as we all learned in elementary school, dates back to Native Americans, who shared their knowledge about farming maize with the Pilgrims.

“The green ears roasted, are delicate food; and as the corn ripens and grows harder, the ears boil’d are good eating, with butter and salt,” wrote French botanist Henri-Louis Duhamel du Monceau in A Practical Treatise on Husbandry in 1759. An 1808 pamphlet, The Cries of New-York, discusses “a girl, with a dish of corn on her head, passing along the streets, crying, ‘hot corn,’ ‘hot corn.’ ” It says the corn was boiled with salt, which made for “very pleasant eating.”

In those days, people ate the corn with their hands, said Lou Greenstein, a culinary historian and collector of more than 15,000 antique kitchen implements. But it was in the late 19th-century Victorian era that upper-class people began to take notice of corn, and come up with more elaborate ways to prepare and serve it.

“Nothing went onto the Victorian table that wasn’t designed,” said Greenstein, who owns a number of that era’s two-tined forks used to hold corn — the predecessor to the plastic corn-shaped holders we see today. Typically, he said, the Victorians would cut kernels off the cob with metal scrapers. A corn holder that looks like a tiny ear of corn — with a blade to stick in the cob, like a whimsical little corn sword — was patented in the United States in 1909, and evolved over the years, shifting to yellow plastic around the ’50s, Greenstein said. That’s when American kitchens got considerably kitschier — think novelty cookie jars — and postwar prosperity meant more consumer spending on household goods.

One 1977 patent for corn-shaped holders spelled out, in precise, stilted language, why we need corn holders.

“It is generally well known that many persons enjoy eating corn ‘on the cob,’ by holding the corn ear in the hands while the corn kennels are bitten off therefrom,” says the application for Larry Riedinger Jr. and George Spector’s “cornscrew.” “When the corn is thus eaten, it must be hot, having been just removed from a pot of boiling water so that the ear is usually too hot for being comfortably held in the hands.”

In recent years, some manufacturers have reverted to a more minimalist look for their corn gadgets, which might have plain yellow handles that suggest corn without depicting it. Other gadgets have followed suit, such as the plain curved blade of Butter Once, a device Anne McMahon and her husband, Joe, both interior designers from Wilton, Conn., created together. It’s an alternative to other corn butterers, which can hold up to a whole stick, making them more wasteful.

“He was at a barbecue with all his childhood friends and family and watching them struggle to butter corn with a regular knife and it ended up all the bottom,” said McMahon of her husband, who came up with the knife’s shape. “He thought, ‘I think there’s a better way.’ ”

The device “really took off this summer” and they’re now at work designing a corn de-kerneler.

“I wouldn’t say it’s a weird market, but a specific market,” McMahon said. “It’s kind of strange that there are so many different tools” for corn.

Because we don’t really need corn holders and scrapers and de-silkers. We can do these tasks with knives and our hands. Yes, freshly cooked corn is hot enough to scald — about 200 degrees Fahrenheit straight out of the microwave after five minutes at full power, and about 150 degrees from a pot of boiling water. But that’s also too hot to put in your mouth. By the time the corn has cooled enough to eat, it’s also cool enough for your fingers.

In this Life-Changing Magic of Tidying Up era, do we really have room for gadgets that can only be used on one type of vegetable — and a vegetable many eat for only a few months out of the year, at that? They’re always in the back of your drawer where you can’t find them. Somehow, there’s always an odd number of corn-shaped prongs. But corn strippers and holders make it through a kitchen purge because they’re small and whimsical. Look at the face of a pig-shaped corn holder — first patented in 1937 — and tell me it doesn’t spark joy.

We don’t need corn holders. But we want them.

“It’s one of those cute little things, where you see products that are yellow and they’re impulse buys,” said Melissa Scagnelli, senior product manager in the tools and gadgets category at Oxo, the kitchen tools manufacturer. “Like, ooh that’s cute.”

At Sur La Table, approximately 30,000 corn-related items have been sold nationwide every year since 2014. “We are in the height of corn season and sell the majority of our corn tools June-August,” wrote Kelly Smith, the company’s buyer for cooks’ tools, furnishings and barbecue, in an email.

Okay, maybe there are some reasons we need them after all: Corn scrapers give unsteady hands a safer way to slice kernels without a knife. Corn holders give slippery-fingered kids an easier way to eat. And, based on the number of patents for corn holders, slicers, cookers and butterers over the past century, they give entrepreneurs a shot at the American Dream, through the most American of crops. Like the McMahons and their corn knife, everyone thinks they can help you butter better.

That is, if that’s what you like on your corn. Which would be a taste that one half of the corn butter-spreading inventor duo does not share.

“I don’t put butter on my corn,” Anne McMahon said. “I don’t put anything on it. I just like it plain.”