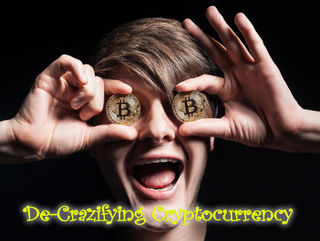 Yesterday, Bitcoin prices set an all-time high above $4,400. The value of this cryptocurrency is now over 30% from $3,382 at the end of trading a week ago. Major investment managers are now tracking the asset, and a few analysts subsequently increased their price targets from $5000 to $7500. Plus, a startup called FileCoin just raise a $200 million initial coin offering (ICO), most of it in under a hour before the servers crashed from too many potential investors beating down the doors.

Coinmarketcap estimates the value of all cryptocurrencies issued at $141 billion, up nearly 20 percent from $118 billion last week. That’s in ONE WEEK. With a tsunami of FOMO (the “fear of missing out”) hitting the market, maybe it’s time to “de-crazify” cryptocurrency a little.

Here are a few thoughts to consider before trying to catch the wave:

First, since I’m involved in the blockchain world, quite a few non-techy friends have asked me, “Can you explain why a Bitcoin is worth $4000?” My answer is to ask another question: “Can you tell me what a Van Gogh is worth? And why?”

The most expensive Van Gogh ever sold, Portrait of Dr. Gachet, had its price set in an auction in 1990, at $82 million ($150 million in today’s dollars). Munch’s Scream was the most expensive painting ever sold at an auction, at $120 million. So the answer to why is: “Things are worth what people believe it’s worth.”

Bitcoin however, isn’t a Van Gogh. Bitcoin is the Kim Kardashian of currency. Kardashian is only famous for being famous, as she enjoys no other intrinsic, artistic value as a performer or entertainer. Bitcoin having no intrinsic value, except for the value of consensus, is more like a tulip auction without any tulips.

Bitcoin isn’t even a decent e-commerce currency, as the price is far too volatile. And honestly, would you wait 5-10 minutes for your credit card to clear at Starbucks? So what is it good for? The reality is that Bitcoin is actually a carefully engineered positively inflating speculative instrument – powered by “mining”, which is essentially a bribe to get people to believe in its value. As a result, when this inducement for mining ends, unless a critical mass of consensus is achieved, the value of Bitcoin might begin to “progressively deflate”.

So when does mining end? Well, 15 million of the total allotment of 21 million bitcoins will already be mined by the end of this year. The rest face exponentially increasing mining costs, which means that the inventor of Bitcoin built in a mechanism to wean investors off the bribe, by phasing it out slowly. By the way, this total allotment of 21 million is, in a way, aimed at counteracting the endless printing of paper currencies. That is also part of its value as a hedge against government printing presses.

The fear is that when the party’s over, it’ll be apparent that those who got in early – like in any effective Ponzi scheme – have made millions, but the little guy at the bottom of the pyramid was once again left holding an empty bag. It’s like how Ernest Hemingway described it in his novel, The Sun Also Rises –

“How did you go bankrupt?” Bill asked.
“Two ways,” Mike said. “Gradually and then suddenly.”

Nations and cryptocurrencies go bankrupt in the same way. Monetary collapses happen gradually… and then very suddenly. After the collapse, which comes like a slap in the face and suddenly you’re wide awake… at this moment you can see that the warning signs were always there all along, even at the very beginning. Over a period of years, sometimes decades, a tiny trickle of warning signs turned into a steady stream… and eventually a great flood that washed everything away.

On the other hand, let’s talk about the possibility of a critical mass of consensus being achieved. If this happens – if Bitcoin gets over the hump – then it could potentially become a digital reserve currency, free from the manipulation of fiat currencies by plunge protection teams. However, to do so, cryptocurrency and cryptotokens have to learn how to become more stable, either through the use of derivatives or other means, or by effecting certain technical modifications to transform them from being purely speculative instruments to something new: showing some commitment to preserving value. This new form of currency needs to understand the meaning and purpose of money, as a system to simplify barter and optimize commerce, as an engine of generating prosperity, as a technology that understands the essence of what it means to be human.

However, the necessary technological advances required will likely prove challenging, especially if it continues to be managed by committee; the current forms of governance used by cryptocurrency are egalitarian, but are not well suited as strategies for team cohesion, agility and deep innovation.

More importantly, there’s a bigger picture to see. Consider this parallel from the Industrial Revolution: there were only three thousand miles of railroad track in the United States in 1840—and then private companies built 30,626 miles of track by 1860. Most of this track has financed by early investors getting in on the boom. And it wasn’t cheap – the Erie Railroad cost $23.5 million, a sum roughly equal to the federal government’s entire annual budget at a time.

In the 1880s and 1890s, when a major depression hit, two-thirds of the railroad tracks in the United States passed through receivership and were reorganized by the great Wall Street banks such as J. P. Morgan and Kuhn Loeb. This means that once again, the little guy lost his shirt, and power was centralized in the banks. And today, less than 5% of that track is being used.

[A sidenote: I wanted to add that those Wall Street banks weren’t necessarily evil or driven solely by greed. For example, it was the banks, not government, that required publicly traded companies to adopt generally accepted accounting principles and independent accountants to certify their books – a breakthrough that indisputably protected investors.]

The point is this: bubbles are often how technological revolutions are financed. Early investors, emboldened by early wins, will often double down on visionary companies that have the capacity to build the infrastructure of the next revolution. Hence, ventures like Tezos, Bancor and Filecoin will grab the lions share of the ICO money. Why? Because if one of them turns out to be the Google of blockchains, then there will be a whole lot less shirt losing happening in the future.

You also need to see that the recent ICO trend is essentially a strategy for early Bitcoin investors, aka “whales”, who seek to diversify out of BitCoin and into other cryptotokens that represent indirect ownership of securities in companies that provide foundation technology for the blockchain revolution. Simply selling all their Bitcoin for dollars or euros isn’t going to work. A few weeks ago, the companies flush with ICO money started liquidating their crypto, and it tanked the market. ICOs are the ideal exit play for Bitcoin whales.

When Andrew Jackson made his way from Nashville to Washington, D.C., for his inauguration in 1829, he traveled by coach and it required a month for the journey. Thirty years later it was possible to make the trip in three days. Today, you could do it in three hours by private jet. Before the new technology of railroads was invented, passenger traffic between Charleston, South Carolina, and Augusta, Georgia, was handled by a single stagecoach making three round-trips a week. Five years after rail service opened between the two cities, traffic was averaging more than 2,600 passengers a month.

So, if the history of the railroads is any guide, the key to the blockchain revolution isn’t how quickly you can raise money with an ICO. The key lies in funding new technologies and business models that can deliver order of magnitude improvements in how business is done. The key is to insure that blockchains and ICOs are all about building the future, about innovation, and about vision… and not about being the latest get rich quick scheme. What we need to do is “de-crazify” cryptotokens and blockchains, and focus on what really matters: building out the next stage of the digital revolution and bringing the world fully into the 21st century.