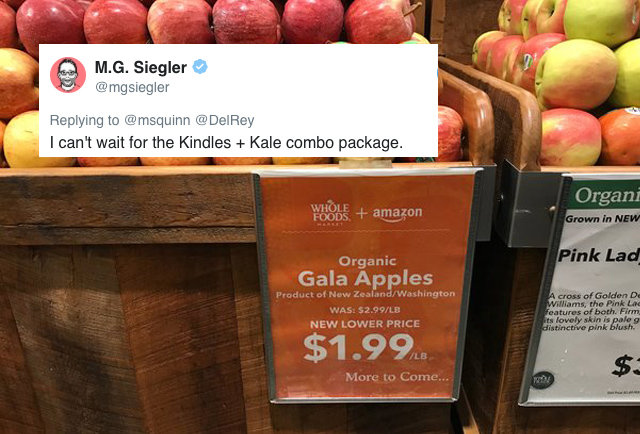 It’s only day one of the Amazon and Whole Foods merger hitting actual stores, but Amazon is already making its mark on the grocery chain. Of course, Amazon lowered prices at Whole Foods right away, but that wasn’t the only change. Amazon’s branding was ubiquitous, and people couldn’t stop joking about the changes.

One of the most noticeable changes had nothing to do with prices. Whole Foods now sells the Amazon Echo and Echo Dot, Amazon’s voice-activated home assistant. They’re probably recognizable from commercials where people are talking to a sentient cylinder they call Alexa. You know, the one that sometimes has weird responses and might accidentally tell kids about the birds and the bees.

Not only is Whole Foods selling the Echo, photos on social media from multiplelocations allegedly show the devices smack in the middle of the produce section with a “Farm Fresh” display. It’s hard to believe these could be free range produce. They almost certainly came from a factory farm.

Whole Foods has not responded to a request to clarify what “farm fresh” actually means in relation to the Echo in the images below.

Mmm, nothing better than a farm fresh Amazon Echo at Whole Foods pic.twitter.com/loj5qHTucC

Ah yes, I remember visiting the farm as a child and milking an Echo and picking Dots. https://t.co/U1eKsXjMdM

Does amazon know what a farm is https://t.co/vo0LP6gFUl

I hope it was ethically sourced https://t.co/lN4lI3WDMS

Pour one out for the Whole Foods marketing/branding peeps who had to say Yes to this Echo display https://t.co/PGpZNQRXJH

I can’t wait for the Kindles + Kale combo package.

While jokes about just how gluten free the Echoes are raged, people were still pretty damn pleased about the price drops at a grocery store known for being a little more expensive than its competitors.

Me walking into Whole Foods after the price cut pic.twitter.com/PN0ML24xra

me and my girls going to Whole Foods after Amazon slashed the prices pic.twitter.com/hG8VtXYudG

No matter how you feel about the merger, this is the new normal for Whole Foods.

.@amazon logo made out of ground beef at an LA-area @WholeFoods. #AmazonWholeFoods h/t @ChrisWoodyardpic.twitter.com/Jv0zLG4LMB

Sign up here for our daily Thrillist email, and get your fix of the best in food/drink/fun.

Dustin Nelson is a News Writer with Thrillist. He holds a Guinness World Record but has never met the fingernail lady. Follow him @dlukenelson.