The latest round of tariff retaliation is sparking worries a global trade war will break out between the U.S. and China.

Beijing on Wednesday announced new tariffs on 106 U.S. products, including soybeans, cars, aerospace and defense. The move came a day after the Trump administration detailed its list of Chinese imports it plans to target with tariffs.

As a result, automakers, defense and other major exporter stocks dropped at the market open Wednesday.

Goldman Sachs gave its clients a specific game plan last year to play this big moment for the markets.

The firm warned at the time that if President Donald Trump does implement a protectionist trade policy, it could start a global trade war and lead to a market drop.

“One potential risk to our central case is that global growth slows, or profits are hit, by increased US tariffs on trade and the possibility of an escalating global trade war,” Goldman’s chief global equity strategist Peter Oppenheimer wrote in a note to clients in July.

In the event of the conflict, the strategist recommended investors buy companies with higher domestic sales exposure.

“Below the surface of the market, trade conflict would benefit the performance of the most domestic-facing U.S. stocks relative to the most foreign-facing firms,” he wrote.

Here are seven companies in Goldman’s domestic sales basket that the firm recommended. 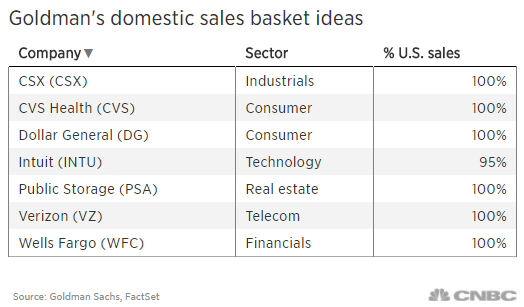 Note: Goldman’s domestic sales basket list is as of March 1.

Shares of CVS Health, Dollar General, Public Storage and Verizon all rose Wednesday morning amid a big market decline. CSX was down more than 1.5 percent.