Cadillac has been touting its Super Cruise semi-autonomous driving technology for several years and contrasting it with Tesla’s Autopilot system.

While Tesla has been rolling out Autopilot in beta-ish fashion, gathering data and updating on the fly, Cadillac and its parent company, General Motors, have exercised abundant caution.

The expansion of Super Cruise … shows Cadillac’s commitment to innovation, and to making customers’ lives better. GM is just as committed to ushering in a new era of personal transport – and technologies like these will enable it

Super Cruise went live last year, and Cadillac just announced that it will be offered beyond the flagship CT6 saloon in all of its vehicles by 2020.

Other GM car brands will get the technology after 2020.

This news comes at a time when Tesla’s Autopilot has come under scrutiny after a fatal crash in March.

“GM is just as committed to ushering in a new era of personal transport – and technologies like these will enable it.”

In 2017, Cadillac invited me to test Super Cruise on a drive from New York to Washington. This was the first leg of a coast-to-coast jaunt, and some of my fellow journalists continued on from Washington to Cleveland.

Cadillacs for the masses: Here’s how China became the largest market for the American marque

It was just me, a cooler of snacks and refreshments that Cadillac had provided, and 226 miles (364km) of mostly motorway driving in a CT6.

A cadre of curious scriveners gathered at Cadillac House in lower Manhattan, saddled up in their cars, and after a languid tour of the island under police escort and some helicopter cameras – no Super Cruise was involved because of low speeds – I aimed the CT6’s elegant nose south and hit the New Jersey Turnpike. Then I waited for Super Cruise to offer its services.

In a press conference before we departed, former Cadillac head Johan de Nysschen (he left in 2018) called Super Cruise the first fully hands-free dual-carriageway driving technology, so the next few hours would strain my belief that no one should ever trust a current-generation, semi-self-driving technology enough to take their hands off the wheel.

Porsche Cayenne E-Hybrid has the winning edge in SUVs

However, in the interest of journalism, I decided to suspend my reservations and give Cadillac the benefit of the doubt.

For the next five hours (traffic was intermittently horrible, extending what ideally would be about a three-to-four hour drive) I would let the CT6 handle its own steering.

Super Cruise, like Tesla Autopilot, is not truly a self-driving technology – not in the same way that Waymo’s experimental vehicles have managed a wide variety of mobile challenges with limited human intervention.

The carmaker has carefully defined its operating rules, starting with restricting to dual carriageways only (no oncoming traffic) where on-ramp and off-ramp access is extensive. 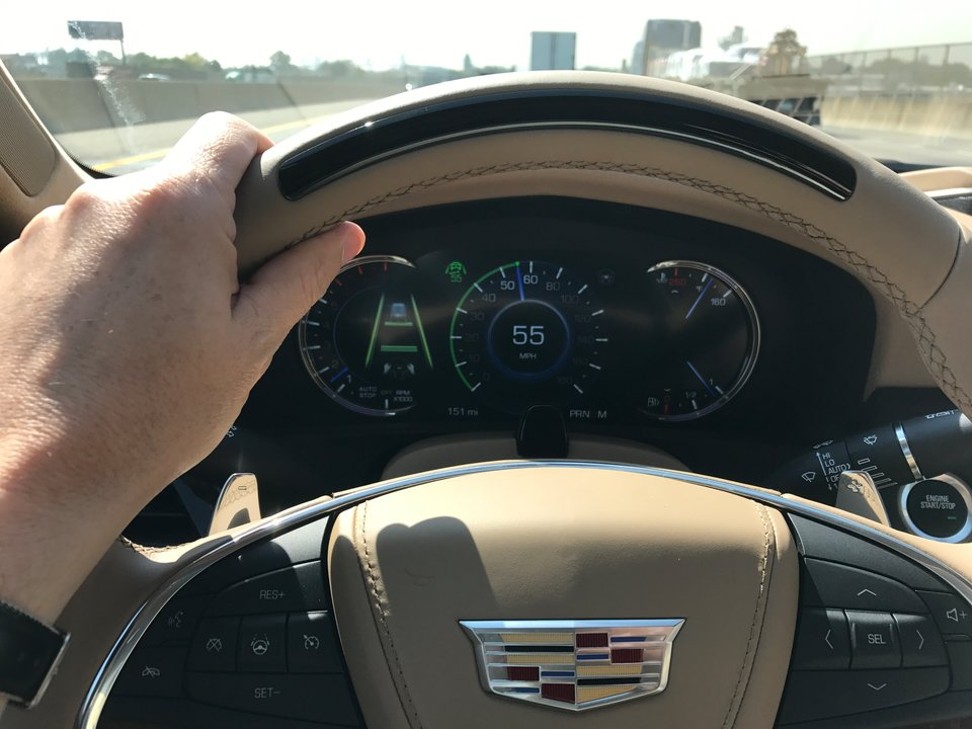 Beyond that, according to Cadillac the Super Cruise algorithm demands that: adaptive cruise control is active; the forward collision system is set to alert and brake; the vehicle is on a limited-access dual-carriageway; camera or radar sensors are not covered, obstructed, or damaged; the system detects that the driver appears attentive; lane markings are clearly visible, not blurred by weather or other factors; and the “Teen Driver” feature is not on.

About that “driver appears attentive” part: Super Cruise uses a camera mounted on the steering column to monitor how attentive you are being.

It disengages if your eyes wander from the instrument cluster. So although it is possible to engage in risky and distracting behaviour, such as texting or checking Instagram, the system will eventually catch you out.

I engaged in such distractions while in the CT6 – again, journalism – and the system performed as advertised, dispensing warnings that I will detail in a moment.

I am not sure if I broke the Super Cruise protocols too much, but it did seem to go into hibernation mode at one point, disabling itself until I stopped for lunch and then fired the car back up.

For the record, if you repeatedly ignore the warnings and deactivations, the vehicle will eventually slow down and then stop itself, and make a call to OnStar, GM’s safety-and-communications software.

So how does it work?

Cadillac and GM have used laser-radar (Lidar) mapping to record 130,000 miles of main roads, so Super Cruise is starting with a detailed digital landscape. For example, it will not make itself available to the driver if the road being used is not up to par, because of construction.

Once you have adaptive cruise control (ACC) on, as well as collision avoidance, and have set the cruising system – a familiar process to any owner of a modern luxury vehicle with ACC – Super Cruise will signal that it is ready by bringing up a steering-wheel icon on the cluster.

If your eyes wander, the green light bar flashes to bring you back on point, and if you persist, red flashes are accompanied by a seat buzz {then] rapid red flashing, a warning message … and a voice command telling you to take control while the system deactivates

Then you simply push the corresponding button on the steering wheel, and the entire cruise-control system goes green and a green light bar at the top of the wheel illuminates.

Then you can safely remove your hands from the wheel, restrained only by your own lack of anxiety about a self-steering US$82,000 car.

The actual steering is human-like in long, sweeping curves – Super Cruise seems to plot a gradual arc – but in tighter curves, the system shimmies its way through in a manner that is similar to what Tesla’s Autopilot does.

There is an occasional wiggle when some lane-keeping calculations are underway, but otherwise, Super Cruise is pretty placid.

Even being hemmed in by three articulated trucks at 65mph on the Jersey Pike did not seem to perturb it, and that is usually a white-knuckle situation that compels me to take back total control. 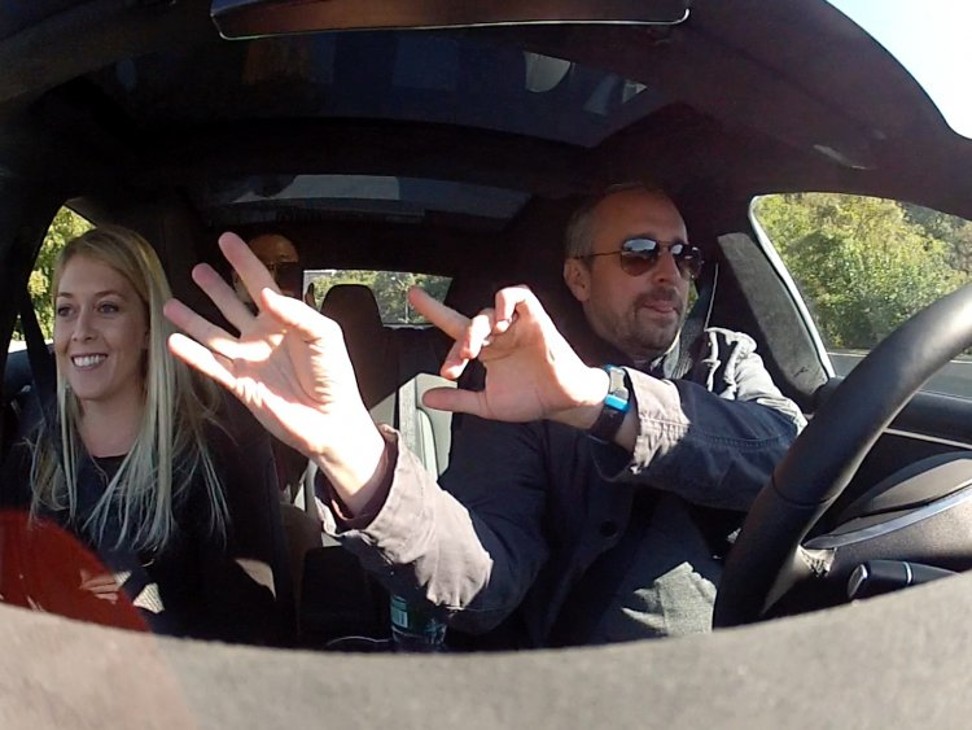 If your eyes wander, the green light bar flashes to bring you back on point, and if you persist, red flashes are accompanied by a seat buzz.

Continued obliviousness prompts more rapid red flashing, a warning message on the cluster, and a voice command telling you to take control while the system deactivates (ACC remains on, however, as does the collision-avoidance technology).

For what it is worth, Super Cruise works in both the CT6’s Tour and Sport modes, but toggling between them when the system is on makes no discernible difference in how the steering functions.

If you take the wheel while the system is humming away, to change lanes for instance (which Super Cruise, unlike Tesla Autopilot, does not do), the steering-wheel light bar then the icons on the cluster, turn blue for a moment, then revert to green.

So what is the overall Super Cruise experience like?

I did not use it long enough to fairly review the technology, but I got a good idea of what it can and cannot do.

It was not consistently available on my 200-mile-plus drive, but that can be chalked up to the system’s inherent caution. It essentially will function only for stretches where you are not likely to get yourself in trouble and will have adequate time to retake control.

Thanks to the camera that is keeping an eye on you the whole time, shenanigans are difficult, a big point in Super Cruise’s favour. You are not steering, but you are monitoring the technology.

This degraded my situational awareness less than I thought it would. But if I used Super Cruise often, I could see how that might change.

At the end of my ride, I concluded that Super Cruise is excellent and reduces about 10 per cent to 15 per cent of the cognitive demand of a long drive

Obviously, it is possible to do stuff with your hands that might have formerly required intricate manual choreography. Air guitar. Juggling. Opening a tin of mints. But I would no recommend it.

At the end of my ride, I concluded that Super Cruise is excellent and reduces about 10 per cent to 15 per cent of the cognitive demand of a long drive.

I often use ACC, and I find that on long stretches of main road, I can manage the steering with one hand. Taking away that requirement lowered my stress level and left me feeling slightly less fried mentally when I arrived in Washington in typical rush-hour traffic in our nation’s capital.

For anyone who routinely pilots the country’s vast motorways, this could make Super Cruise more than worth the upgrade, which will amount to an extra US$5,000 to finance the combined Lidar-camera set-up.

How does Super Cruise compare with the competition?

I have spent my time with Tesla Autopilot and more recently with Volvo’s Pilot Assist feature. None is a truly autonomous system – rather, they layer automated steering on top of adaptive cruise control.

Volvo’s system made me just as nervous as Tesla’s more ambitious technology.

Super Cruise wound up boring me, but in a good way.

Autopilot purports to do a lot, but it is still unclear how much confidence it can inspire (in me, not enough to go hands-free)

Autopilot purports to do a lot, but it is still unclear how much confidence it can inspire (in me, not enough to go hands-free).

Super Cruise left me feeling slightly more comfortable about hands-free driving, but only slightly, and that is because the system is masterful at restricting itself to what it does well.

We are in the early stages of the “iterative” approach to self-driving cars, with some carmakers adding semi-autonomous features to vehicles consumers can buy today.

Other companies, such as Waymo, are shooting the Moon and striving to leapfrog the iterative improvements.

The Alphabet division, formerly the Google Car project, is expanding its self-driving fleet through partnerships with Fiat Chrysler Automobiles and Jaguar Land Rover, aiming to offer a commercial service in 2018 and 2019.

The bottom line for my limited experience with Super Cruise is that it is a very General Motors approach to self-driving (although do not forget that since GM also bought self-driving start-up Cruise Automation it has begun making vehicles with far greater urban autonomous capability).

That is doubtless why Super Cruise is coming first to Cadillac, and for the early roll-out, will be available only on the CT6 for now.

Cadillac has been around for more than 100 years. No need to rush into the future.