Setting up process: Both are equally good

The setup process is nearly the same: connect the phone to the Echo or Home through Wi-Fi. You will then need to follow the simple steps to setup the device. Both devices are easy to set up but in our experience the Echo took considerably longer to set up than the Google Home. Surprisingly, we did try the Amazon Echo Spot – the newest speaker by Amazon – and it connected in a jiffy compared to the Echo.

Some points to remember: for Google Home, you need to be within four feet of the Wi-Fi router to get it up and running. No such thing is required for the Amazon Echo.

The Google Home works only when you use two wakeup commands, “Ok, Google” and “Hey, Google”. For the Echo, you can say Alexa, Amazon, Echo and even Computer to get it going. 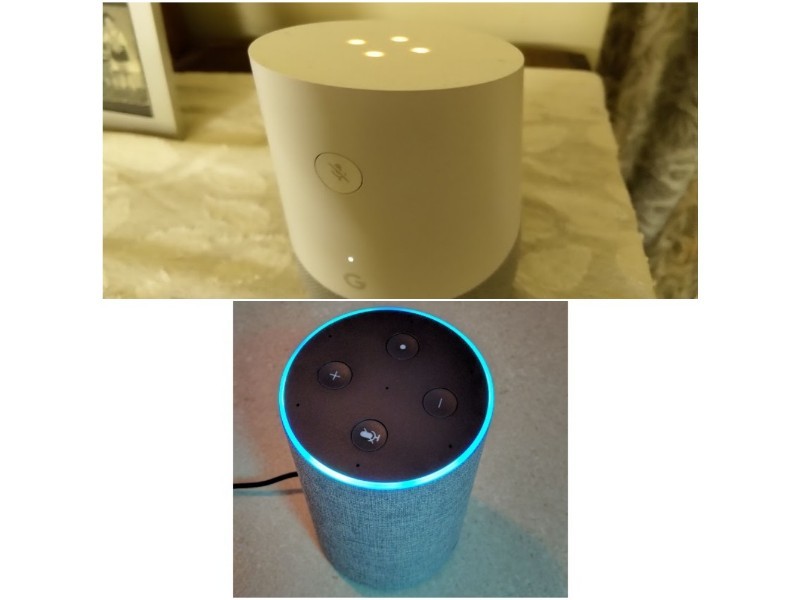 In terms of design, both devices have gone minimalistic and kept thing simple. While the Google Home has a peculiar shape and comes in white colour – though the bottom fabric can be changed – the Echo has a cylindrical shape. The Google Home has capacitive touch buttons with LED lights in ‘Google’ colours – looks classy for sure. The Amazon Echo is more ‘flashy’ as it has LED lights that are powered every time you wake the device. On top of the Echo, there are the volume buttons, microphone button and another button for other commands.

Google has kept it simpler – and better – as there are no buttons on the top of the device. Just tap the surface of the Google Home to increase or decrease volume. There’s a button switch off the microphone which is on the rear side of the Google Home.

The Echo is definitely heavier than the Google Home but that’s moot point as neither of the devices work without being connected to a power socket. So, portability isn’t an option with these smart speakers.

Both Amazon Echo and Google Home can be connected to other speakers through Bluetooth. The Amazon Echo gives you an additional option of connecting another device through a 3.5-mm port which is lacking in Google Home.

In terms of sound quality and audio performance is hands, the Echo has a slight edge over Google Home as it is certainly louder. Even when it comes to voice recognition, the Echo is better equipped as it has seven far-field microphones inside it for better recognition. The Google Home’s audio performance is much better. The voice texture is good as is the bass response when compared to the Echo. The Echo is certainly louder but lacks the finesse and almost every song you play sounds pretty same as it doesn’t manage instrument separation very well.

As far as playing music is concerned, both devices support third-party apps such as Gaana and Saavn. While Amazon has a treasure trove of music on its Amazon Music, Google has the option of Google Play Music. 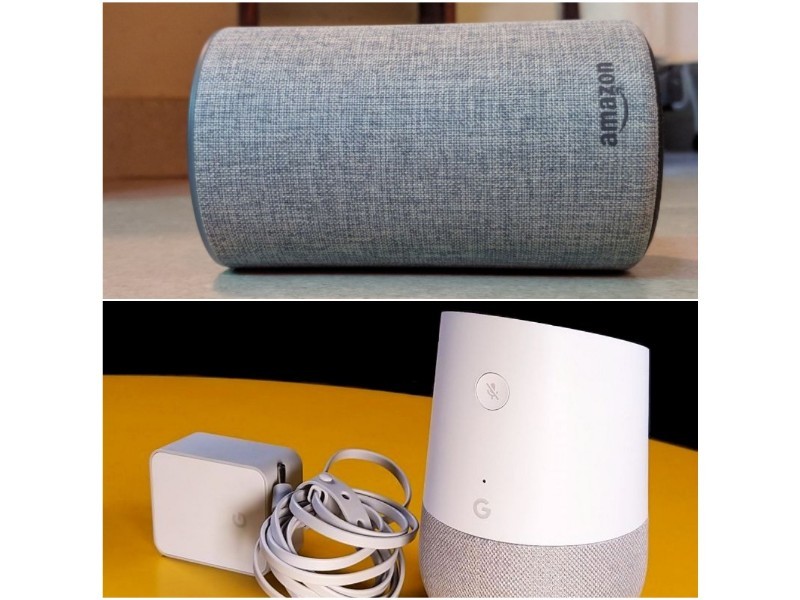 Smart assistants: Google Home has a slight edge
It’s a bit tricky to judge these devices on the performance of their AI-based voice assistants. We asked the same questions to Amazon Echo and Google Home and got a mixed bag of responses. For example, we asked the Amazon Echo “Alexa, remind me to watch the Manchester United match at 9pm”. At 8.56, there was a reminder that buzzed on the Echo. With Google Home, we gave the same command and got a notification reminder on the smartphone also.

Both devices are equally capable of setting alarms and answering basic questions, telling jokes (they aren’t funny ones)play music on command. Having said that, the Echo does a better job of playing regional music as it understands other languages better than Google Home – as of now.

Google Home has a big advantage that it has the backing of Google’s powerful ecosystem, so its Assistant is certainly smarter. Having said that, if you are deep into Amazon’s shopping, music and Prime – then the Echo has the edge.

Google Home also has the added advantage of Chromecast as you can ask it to play videos on YouTube or stream content from Netflix. The Echo, surprisingly, doesn’t have support for its Fire Stick at the moment.

Amazon Echo vs Google Home: Both are good

We tried certain smart devices – like the Philips Hue bulb –with the Echo and Home and both worked smoothly. It’s fun to ask the speakers to dim the light or brighten it. While the ecosystem of smart products is still very limited, do keep in mind that these devices cost a lot. Their functionality is not in doubt and both the Echo and Home do a fine job of managing it.

Which is the better choice? Depends on what you prefer
Like most devices, both the Amazon Echo and Google Home have their share of pros and cons. Google Home has an edge over Echo in terms of its bigger and powerful ecosystem. Not to forget, that one is more invested in Google than one is Amazon – at least at the moment. If you’re an online shopper and Amazon is your go to website, then the Echo is the perfect buy as it really eases the whole process.

At the moment, Amazon might have had a head start on Google but simply for the fact that one is more reliant on the search giant, gives the Home a slight edge. Having said that, the Echo is a powerful device that won’t let you down either. In the end, the choice will come down to what appeals most as both devices are reliable and powerful.