On October 4 Google introduced its latest ‘made by Google’ phone, the Google Pixel 2. In fact, and in accordance with expectations, Google unveiled two Pixel 2 models, the standard Pixel 2 and a new Pixel 2 XL. Both of which follow-on from last year’s Pixel and Pixel XL models, although that does not mean they as alike as their predecessors were. If anything, the differences between the Pixel 2 and 2 XL are now far more apparent and in many ways highlights what is good and what is bad about the Pixel line in general. 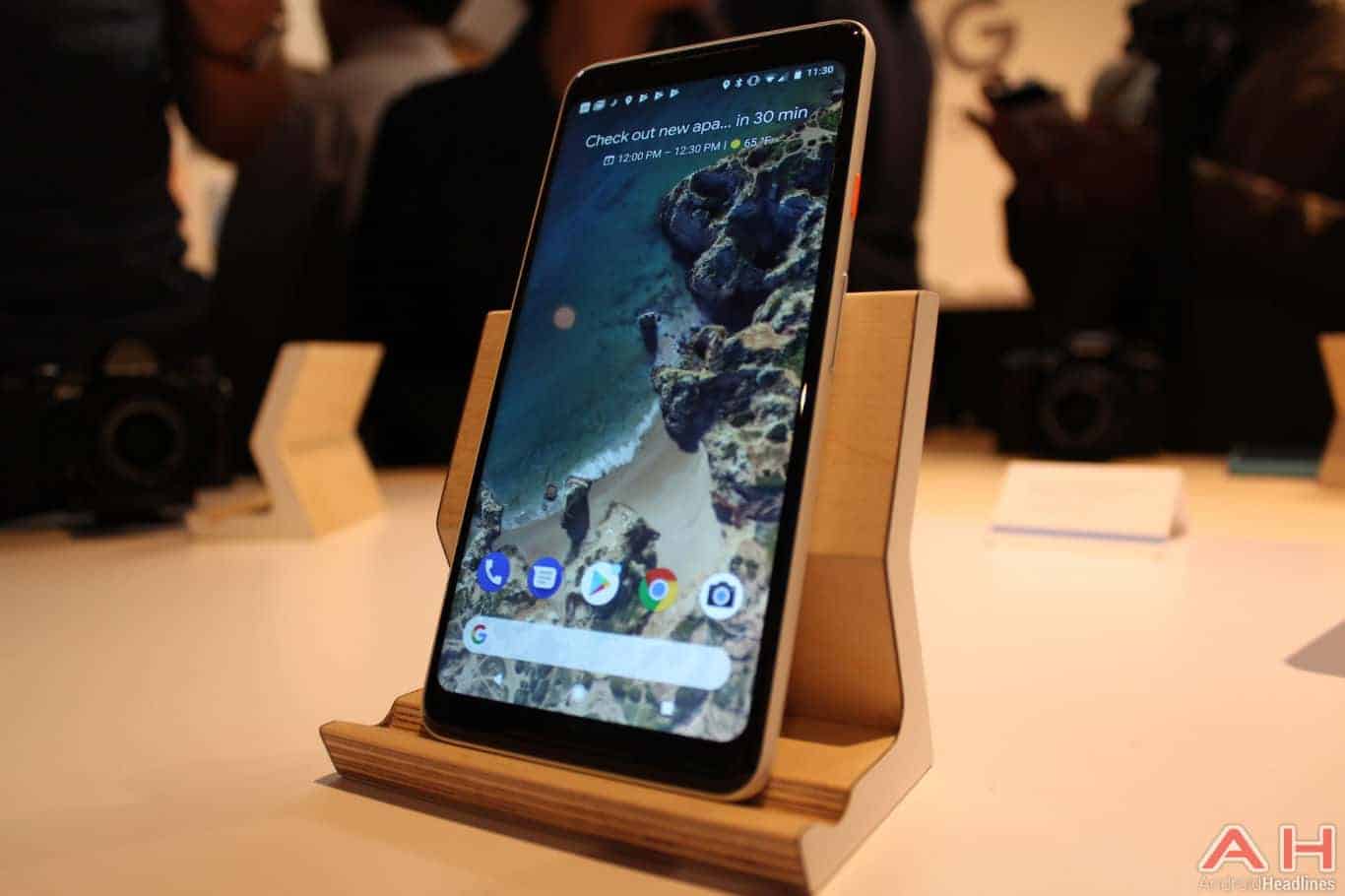 When it comes down to it, the Pixel 2 XL is good. It really is, and really does look like an evolutionary step compared to last year’s model. One of the most notable design changes with the new Pixel 2 XL is that Google has opted for a bezel-less display. Arguably this is not quite as bezel-less as some devices from other manufacturers, but is still enough and certainly when compared to the rather thick top and bottom potions included with last year’s model. Adding to that is the inclusion of an 18:9 aspect ratio which has quickly become one of the go-to features for smartphone manufacturers this year and it is good to see Google keeping up with its contemporaries on design – something the company has been criticized on when it comes to the Pixel and Nexus lines in general.

Speaking of which, another good point with the Pixel 2 line is that they now come with some OTT features. Most manufacturers are now looking for ways in which they can distinguish their smartphones from the rest of the pack and up until now, whether it be Pixel or Nexus, Google-affiliated phones have been a little lacking when it comes to additional features and functionality. Yes, you get the latest version of Android and everything that comes with it (although that also rolls out to most other flagships in due course), but in general, Pixel and Nexus phones have been a little too stock when it comes to additional features. That has now changed however as in addition to the already mentioned 18:9 aspect ratio on offer with the 2 XL, both models also feature Active Edge. While this is not exactly a new new feature (HTC U11), it is still one that you won’t find on (most) other phones and one that not only adds to the software experience on offer, but also the value associated with the Pixel 2 and 2 XL.

Continuing with the experience, and the original Pixel and Pixel XL phones were all about the camera and while it may be a little early to return a verdict on the cameras on these latest models, the early indications is that the camera experience is second to none. This is something that already seems evident based on the announced DxOMark scoring as the Pixel 2 has seemingly crushed the competition, and by a wide margin. Something which is even more impressive when you consider the Pixel 2 and 2 XL only makes use of one rear camera – compared to the likes of the Galaxy Note 8 and iPhone 8 Plus (the nearest rivals on DxOMark) who employ the help of dual rear cameras – offering consumers a dual camera experience without actually providing the dual rear cameras. So it is clear that Google has placed a good deal of focus this year on the software experience and this is without even taking into consideration the likes of Google Lens (debuting on the two Pixel 2s), the advancements of Google Assistant, the various other Pixel-specific launcher tweaks, free full quality photo back ups, and of course, three year’s worth of OS updates. All selling points in their own right, and all ones which further highlight the user experience.

Last but not least, another very good thing is that even though there are two models available, beneath the surface they are almost identical. This was the case last year and it is good to see Google continuing that approach this year. As regardless of which model you opt for (and barring the likes of screen size, resolution, and battery capacity), the experience on offer should be very much the same. Meaning the only real decision is which device size is better suited to your needs. Are you more of a 5-inch or a 6-inch person? 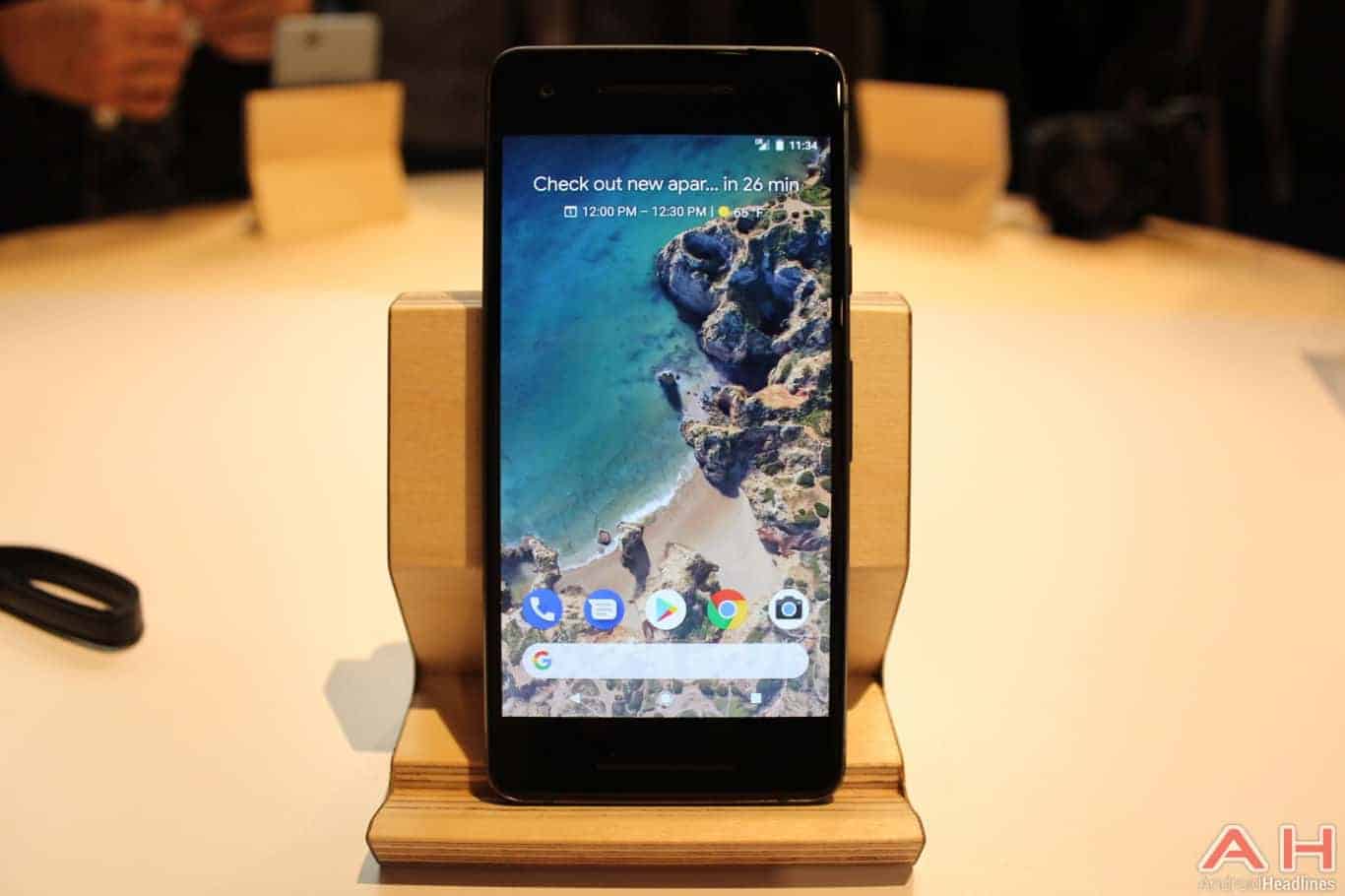 One of the good points already noted is that there are two models with one of them adopting a premium stance, however, this is also one of the bad aspects. As while Google is offering consumers a choice of size, they are also by default forcing that choice to be about the quality of the display in general. One of the best aspects of the two new Pixels is that underneath they offer a same experience, however the same cannot be said for the exterior. Not only is the Pixel 2 XL better on paper, but it looks better – and again, by some margin.

While the Pixel 2 XL comes with all the 2017 trending display features, the standard Pixel 2 looks like it uses the exact same shell as the original Pixel smartphone. Yes, the sides of the device now include Active Edge functionality and the back of the device looks the same as the 2 XL, but the front of the device not only looks like the original model, but looks far too dated. This means that those who prefer a smaller phone are forced to compensate by having a dated looking phone. If anything, it could be argued that of the two new devices, if only one of them was going to feature a larger display within a smaller body, then it should have been the smaller phone. As not only are Pixel 2 buyers getting a smaller 5-inch display, but they are having to make use of that display within a body that does not differ in size as much as you might expect. For example, the 6-inch display on the Pixel 2 XL results in a device that is 6.2-inches tall and 3-inches wide. By comparison, the significantly smaller 5-inch display on the Pixel 2 is housed within a body that is 5.7-inches tall and 2.7-inches wide. So the sizes of these two phones are far more similar than the display sizes would lead you to believe. And this is before getting into the benefits of the 18:9 aspect ratio, or the fact that the Pixel 2 XL’s display uses a QHD-quality resolution compared to the FHD resolution on offer with the smaller display, but not so smaller body, standard Pixel 2.

So to sum up, while it is not bad that Google is offering two variants of the the new Pixel 2, it is bad that those variants differ more than Google suggested during the Pixel 2 announcement. Yes, underneath they are the same and should offer a similar experience but that is only half of the selling battle. The aesthetics of a smartphone has become a big deal in the last couple of years and phones are now quickly becoming very dated (sometimes in a matter of months) in terms of their looks. Unfortunately for the standard Pixel 2, this one was dated before it even arrived. 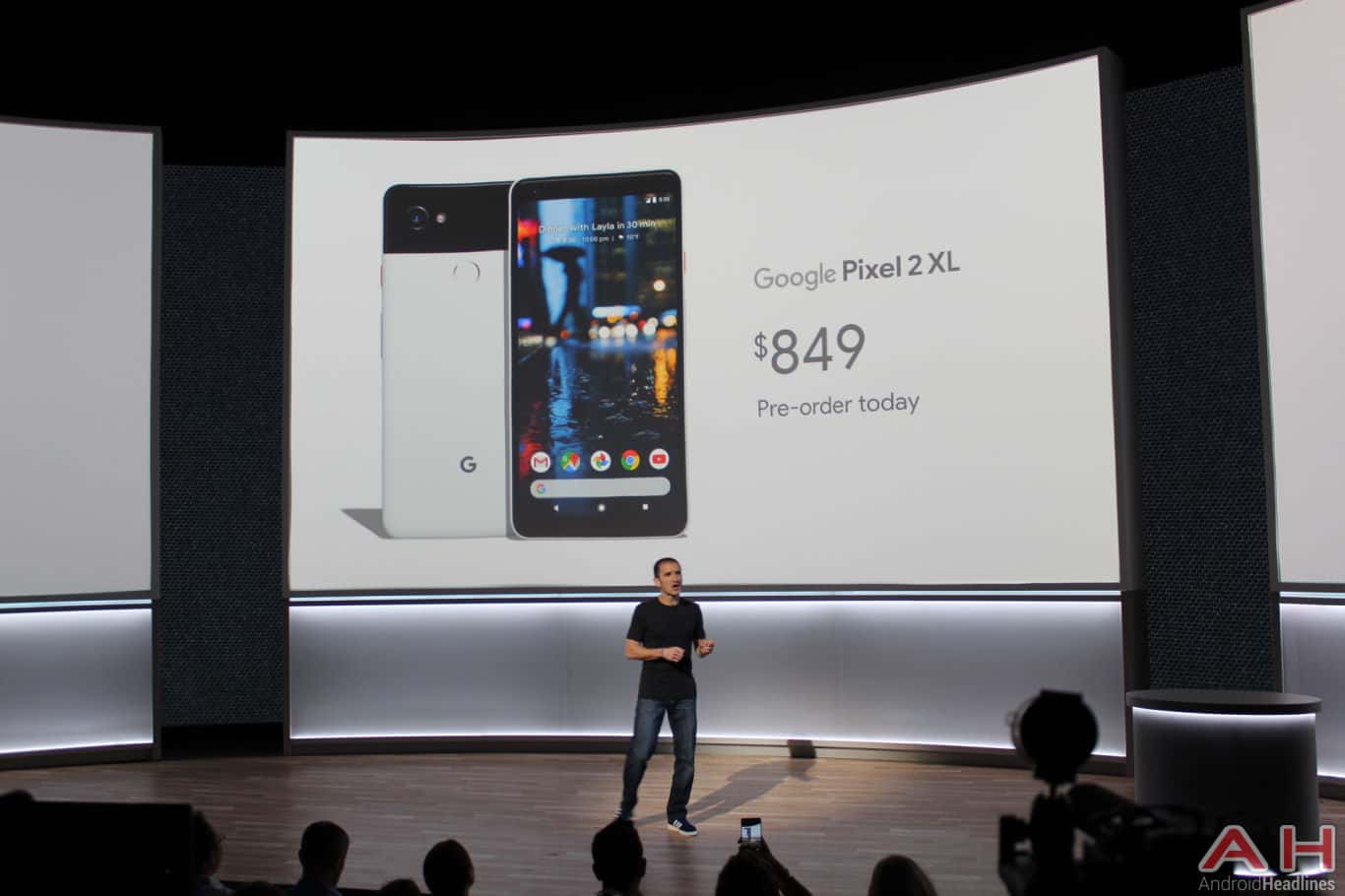 What is ugly is the price and certainly if you want the more appealing Pixel 2 XL model. The original Pixel(s) were not exactly cheap when they were released (for example, the original Pixel launched for exactly the same price the Pixel 2 has), but that is not a good thing. The market has changed a lot over the last couple of years (and exponentially over the past 12 months) and now trying to get someone to pay $650 or $850 (as a minimum) for a new smartphone is a hard sell. Yes, some will be happy to pay that for a new device but when you compare what you can now get for half that price (and even a third of the $850) it starts to put the value of the Pixel 2 phones into perspective. With two models on the go it may have been nicer to see Google more aggressively challenge the mid-range price spectrum as well as the high-end, instead of asking an entry-level high-end price and a premium-level high-end price for the two phones. Something which is even more apparent when you consider Google has once again partnered up with Verizon as the ‘exclusive Pixel carrier.’ While in real terms this might not mean that much – as you can buy a Pixel 2 and use it on any network – it does matter if you are not looking to shell out the full cost of the smartphone in one go, and without having to go through Verizon. This is quite likely why Google this year started up a trade-in program while also affording buyers the option to finance the new Pixels. Although even with these additional payment measures and subsidies it is still not great to see such exclusivity at the price point, and especially when companies seem to be turning away from exclusives in general.

While it may be a little too early to say this, another ugly looks likely to be stock. The original Pixel and Pixel XL became notorious for being out of stock last year and while the expectation is that Google has learned from those mistakes, the reality is Google might not have. The two phones have yet to become generally available and signs are already showing up that stock is going to be an issue again this year. At least, with some models. As of right now, the standard Pixel 2 is available to buy in three color options although the ‘Kinda Blue’ version is already listed as out of stock. More worryingly is the Pixel 2 XL, as this model is only available in two color options and at present the ‘Black and White’ model is also out of stock. Adding to that, the 64GB version of the ‘Just Black’ model of the Pixel 2 XL also seems to be continually popping in and out of stock. So in spite of the phone having yet made it to a general sale status (and when keeping in mind that Google is not expected to be selling in the kinda numbers that Apple and Samsung sell in), at present the Pixel 2 XL is only definitely available in Just Black and as a 128GB model – which coincidentally pushes the price up another $100, to $949 before tax – ugly. 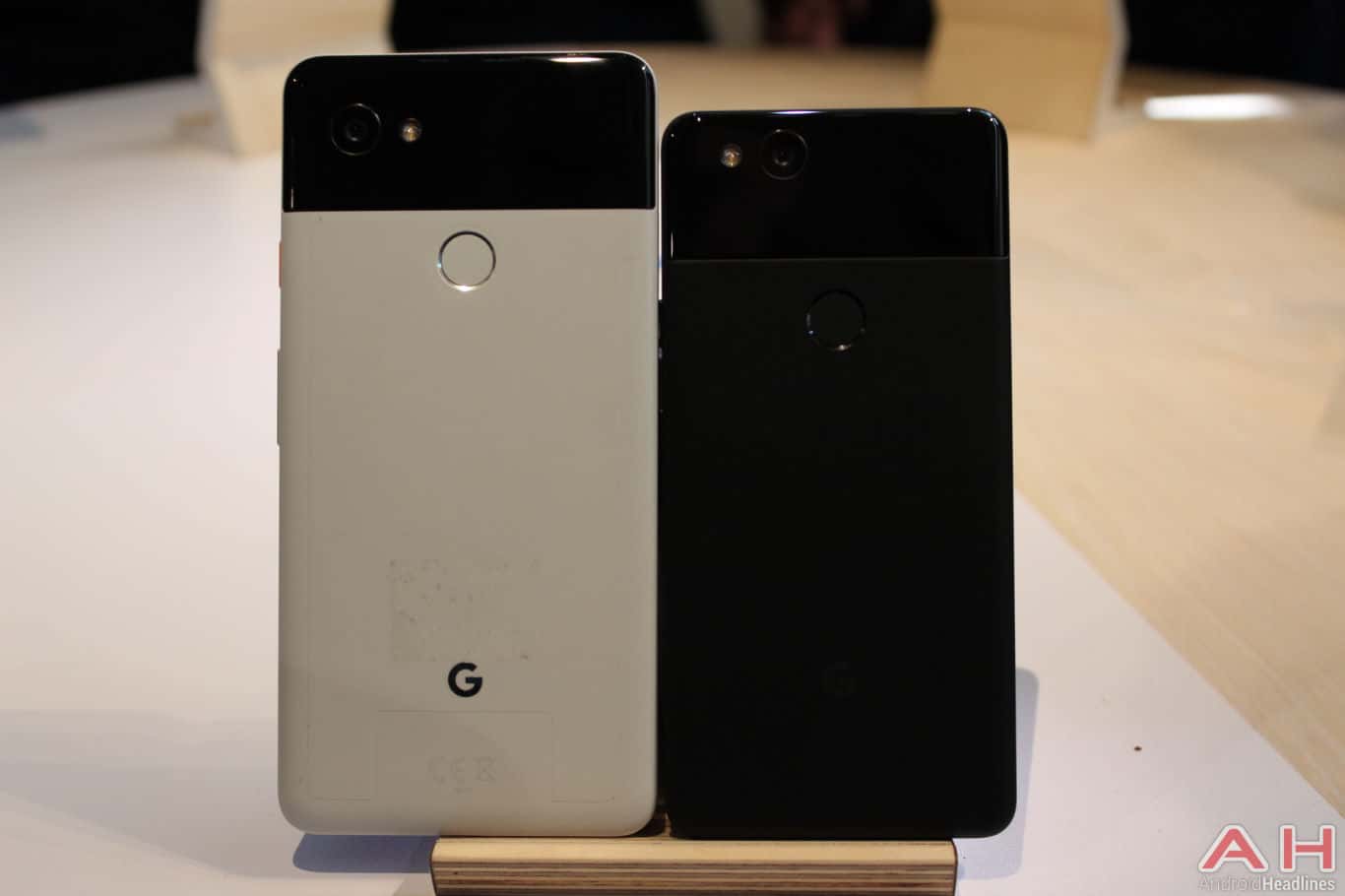 The Pixel 2 and the Pixel 2 XL do have a lot going for them, and arguably are two of the best phones you can currently buy. Well, one of them is for sure. However, as is the case with Google in general, where the Pixel 2 and 2 XL may come undone is in their ability to actually end up in the hands of buyers. It is one thing to try and sell a high priced smartphone in 2017, but it is quite another to try and sell a high priced smartphone in 2017 when there is recurring stock issues. And let’s face it, the Pixel phone brand is no longer the debut brand that it was last year – it is now time for Google to start selling in real numbers.