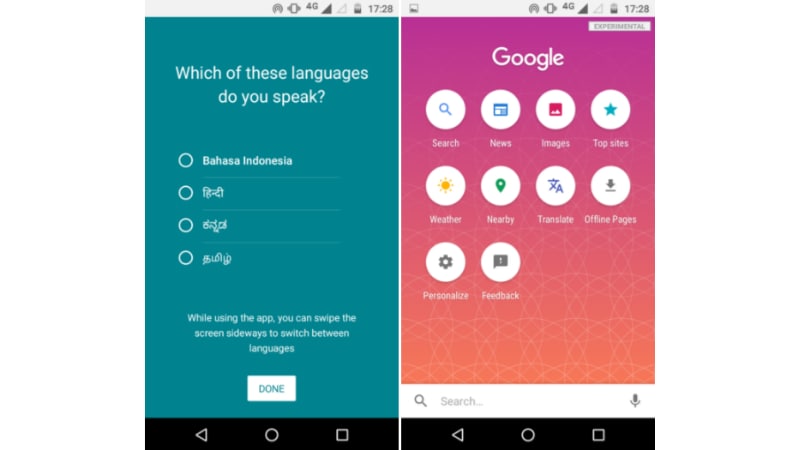 In a bid to get the ‘next billion’ on to the Internet, tech giants are trying various methods to lure the audience that still do not have access to proper Internet connections and gadgets like smartphones. One such effort is now seen by Google with the new Search Lite app that is reportedly being tested in Indonesia.

Android Police reports that the app appeared in Facebook ads for many users in Indonesia, and users who clicked on it were invited to download the app and try it. The Search Lite app is essentially a data-conscious app that lets you do most of the regular Search functions, but by using less data and even supporting few offline features. The app is specifically designed for regions with poor and spotty connections – like India.

The app is not visible in Google Play for free download, but may hit the stores soon once the company is satisfied with its testing. As with all ‘Lite’ apps these days, the Search Lite app will work in slow Internet areas and also support offline features for seamless and uninterrupted searching on Google.

The app lets you change languages (a few like Hindi and Bahasa Indonesia are supported for now), and the home screen has several quick access icons for things like translation, weather, news, offline pages, images, and more. These icons are customisable to your preference as well. The Search Lite app also lets you perform voice search, apart from text search. The search bar is placed at the bottom of the display, and has the option to show keyword suggestions just like regular Search.

Inside the app settings, you can decide whether you want to use ‘lite’ web pages or the internal web browser, depending on your data usage preferences. If in Indonesia, you may see the listing on Google Play, or alternatively, you can sideload the APK file via APK Mirror as well.

To recall, Facebook launched Facebook Lite in 2015 serving the similar purpose, and it now has over 200 million active users. Facebook Messenger Lite for Android was also launched for Indian users last month.