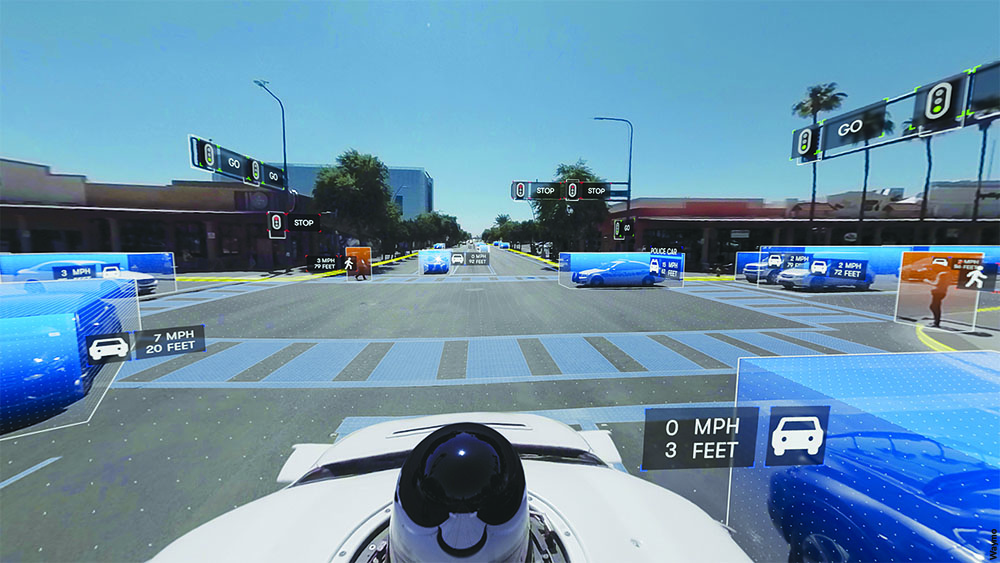 Before two fatal self-driving-car accidents over the last few weeks, the big event this year for autonomous vehicles was supposed to be Waymo’s launch of a paid ride-sharing service in Phoenix.

Waymo, a stand-alone unit of Google-parent Alphabet (GOOGL) since late 2016, is far ahead in the race toward autonomous cars and planned to be first to market with a commercial robotaxi service. If the Phoenix rollout were to go smoothly later this year, it could boost Waymo’s value — some put it as high as $125 billion — as well as light a fire under Alphabet stock. Now the accidents have cast doubt on whether the self-driving car can become the future of personal transport.

Waymo Chief Executive John Krafcik recently said, “We’re building a bridge to trust.” But now he faces an uphill battle in convincing the public that computer-operated cars are safer than human drivers.

The Uber Technologies crash that killed pedestrian Elaine Herzberg on March 18 occurred in the Phoenix suburb of Tempe, not far from where Waymo plans to launch its service. A federal probe of the crash could take a year, and in the interim, Uber has suspended some of its self-driving-car tests.

Federal regulators also are investigating the crash of a 2017 Tesla Model X just five days later. The driver, Wei Huang, was killed when the vehicle hit a concrete lane divider in the Silicon Valley community of Mountain View, Calif. Tesla has confirmed the car’s autopilot system was engaged at the time. Auto-pilot systems are not the same as driverless vehicles that do not require human input but Tesla is a high-profile developer of the self-driving car.

Bullish analysts are buying what Krafcik has to say, however. They peg Waymo’s long-term valuation at anywhere from $41 billion to $125 billion. Those estimates assume Waymo will license its technology to automakers, offer a consumer robotaxi service or find other ways to monetize its driverless system.

“The planned launch of a ride-hailing program in Arizona in 2018 puts Waymo on a clearer path to monetization,” Doug Anmuth, a JPMorgan analyst, said in a recent note to clients. “We believe the value of Waymo is underrepresented in Alphabet (stock).”

Speaking at a National Automobile Dealers Association meeting a few days after the Tempe crash, Krafcik said the Uber “car had technology representing the self-driving space.” Krafcik said that a Waymo vehicle, which employs different technology, would have avoided hitting a pedestrian in a similar situation.

Waymo has been the chief exponent of self-driving cars. The company has launched consumer education campaigns in conjunction with Mothers Against Drunk Driving and other groups.

Krafcik pointed out at last month’s South by Southwest conference in Austin, Texas, that some 1.25 million people die each year in car accidents worldwide. Self-driving cars will cut that number down, he predicted.

So Waymo is forging ahead in Phoenix and elsewhere. The company announced in late March it will buy 20,000 luxury electric cars starting in 2020 from Jaguar Land Rover to expand its self-driving-car services. Parent Alphabet will foot the bill.

Waymo’s driverless Chrysler Pacifica hybrid minivans have logged more than 5 million miles in parts of 25 cities without a fatality. By comparison, Uber’s cars had traveled roughly 2 million miles before the fatal crash. Was Waymo just lucky, or is its autonomous technology superior?

In Phoenix, Waymo’s minivans achieved an industry first by operating over public roads without a human driver available to take over in an emergency. Local residents that joined the early-rider program were given free trips.

Waymo plans to expand its nonsupervised, self-driving-car program to a second city this year.

While Waymo leads the industry by far with its 5 million test miles on the self-driving car, observers say it could take tens of billions of test miles before regulators allow autonomous vehicles to be widely deployed. In the wake of the Uber crash, it’s not clear whether a self-driving car needs to be merely safer than humans, or nearly perfect.

Surveys show that consumers fret about software malfunctions. They also worry that hackers could take over autonomous vehicles and create a demolition derby on city streets.

A self-driving car relies on a mix of technologies to pinpoint location, understand surroundings, and predict what things around it will do.

Waymo’s strengths in artificial-intelligence software, custom-built laser scanning gear and 3D digital mapping technology have made it an early leader. Its stated goal: create the world’s most experienced driver.

To do that, it plans to continually improve computer algorithms for the self-driving car. These are the artificial-intelligence software programs that aim to replicate the human ability to learn, reason and make decisions.

Waymo takes a methodical approach. It’s collecting rich data in urban areas and taking in details like the height of curbs, the width of intersections and the precise location of traffic lights and stop signs. That could take years.

“The scalability of automated driving is what’s in question,” said Roger Lanctot, analyst at Strategy Analytics. “Waymo is on a path to brute-forcing its way, city by city, to achieving true autonomy. They’re refining the process, trying to shorten the time, of adding a city to the deployment plan.”

How Do Self-Driving Cars Work?

For now, Tesla has opted not to use lasers, by far the most costly autonomous technology. Tesla uses cameras, radar and ultrasonic sensors. Its “Level 2” technology enables cars to handle steering and acceleration, but humans remain in control.

General Motors, which plans to launch a robotaxi service in an unidentified  “dense, urban” setting in 2019, uses laser systems. GM has undertaken a self-driving-car program using Chevrolet Bolt electric vehicles in San Francisco. It’s seeking a regulatory green light to build a self-driving car without a steering wheel or pedals.

In Phoenix, Waymo has achieved what’s called “Level 4” automation. Its driverless cars operate without human supervisors but only in a pre-mapped area. Its paid robotaxi service in Phoenix will operate in a 600-square mile area.

Phoenix, with 299 sunny days per year on average, is considered an ideal place to launch a commercial service. Laser systems have trouble in rain, snow and fog.

The holy grail for Waymo, General Motors and others is building a Level 5 fully autonomous car. The vehicle could go anywhere instructed, including unmapped areas, under any weather conditions. At the NADA conference, Krafcik said a free-range Level 5 autonomous car is a “very long way out.”

Wall Street analysts figure on Waymo making money with Level 4 technology, but just how valuable is Waymo? Bank of America puts it at $41 billion, while Morgan Stanley says it’s closer to $70 billion. Jefferies suggests a range of anywhere from $75 billion to $125 billion. That’s still a formidable sum, even for a company like Google’s parent, with a market cap of more than $700 billion.

Waymo has rebounded after losing top engineers who left to form autonomous startups such as Argo, Aurora and Nuro. Krafcik took the helm at Waymo in late 2016. He spent 14 years at Ford and served as CEO of Hyundai Motor America.

Fiat Chrysler (FCAU) makes autonomous minivans for Waymo. But Waymo has yet to forge licensing deals for a self-driving car with the likes of Ford and Honda Motor (HMC) despite reports of negotiations. Waymo and Honda are said to be mulling a partnership to build a self-driving car that would deliver goods.

“If Waymo just licenses their tech to automakers, they will make money in the short run but lose their predominant position in the long run as self-driving technology is commoditized,” said Alexander Hars, managing director at Inventivio, a German self-driving consultancy. “This is OK for the automakers but cannot be the only goal of Waymo.”

Waymo has ordered “thousands” of Chrysler minivans to increase its fleet as it expands to more cities. It also has partners in Avis Budget Group (CAR) and AutoNation (AN) for servicing and housing its fleet. Trov, a startup backed by the venture-capital subsidiary of Munich Re, will provide trip insurance for passengers using Waymo’s ride-hailing service.

And, by getting rid of human drivers, ride-sharing services can drive down costs. Industry-leading Uber is still unprofitable.

When Will The Self-Driving Car Be Available?

But it’s still not clear whether Waymo plans to scale up a worldwide business to challenge Uber or is just out to prove its self-driving-car technology is best-in-class.

CapitalG — a venture investment arm of Google’s corporate parent, Alphabet — has invested in Lyft, the second-biggest ride-hailing service provider, behind Uber. Lyft and other ride-sharing startups loom as potential customers of Waymo and manufacturing partners.

A Boston Consulting Group study forecasts that 20% of the miles Americans travel on roads in 2030 will be in driverless, ride-share vehicles.

Just how much demand there will be from consumers for personal transport is where the rubber hits the road. One common view is that if ride-sharing services take off, consumers will buy fewer cars themselves. At NADA, Krafcik said Level 4 self-driving cars could be in dealer showrooms sooner than people think.

A bullish forecast by consultancy McKinsey says that by 2030, fully autonomous cars could account for 15% of passenger vehicles sold worldwide.

How Much Does A Self-Driving Car Cost?

Much depends on what self-driving technology might cost per vehicle as an options package. Analysts say autonomous technology needs to be in the $5,000-to-$15,000 range, as an added cost on top of the vehicle’s base price.

That would be a huge drop from prototype autonomous vehicles, which use multiple laser systems, cameras and other sensors. Laser systems have dropped from $75,000 to around $20,000, analysts say. Next-generation, solid-state laser systems may bring the price down to $500 to $1,000 each.

Nvidia hasn’t disclosed pricing for its new “Xavier” AI system-on-a-chip for the self-driving car, unveiled in January at the Consumer Electronics Show. The company has told analysts it expects that deployments of the self-driving car will pick up in 2020 — a time frame that may be extended in light of the recent crashes.

“What the (Tempe) episode reinforces is that the conservative approach is likely the best one, and that sensor redundancy is crucial — providing an aviationlike level of safety,” he said in a report. “In this environment, we see Waymo, Aptiv and GM positioned with the right skill sets.”

AI In Business: This Is What The Future Holds

Nissan Takes A Leaf From GM With This Self-Driving Test

Autonomous Cars: Why General Motors Is In The Back Seat Vs. Waymo