HP launched its device-as-a-service (DaaS) business in mid-2016, allowing customers to lease computers rather than buy them outright. And now it is expanding its offering of machines, adding Apple devices such as the iPhone, iPad, and iPod for the first time.

HP is also adding HP Z4 Workstations and HP Windows Mixed Reality VR headsets to its DaaS offering, which means your employees can use the devices as they wish by paying a monthly fee. HP officials have said this offering is key to the future of their computing business.

Under the program, HP’s customers can use their personal computers like a utility, where they pay a monthly fee per seat over a three- or four-year period. They get custom service and support from HP, such as PC configuration, software updates, repair, data migration, and the ability to upgrade to the latest HP computers for the next contract period.

“We are expanding our HP device-as-a-service offering to drive more increased user productivity and IT efficiency for businesses looking to empower the employees while managing complex fleets in a more efficient manner globally,” said Michael Park, vice president and general manager of emerging compute solutions at HP, in a press briefing. 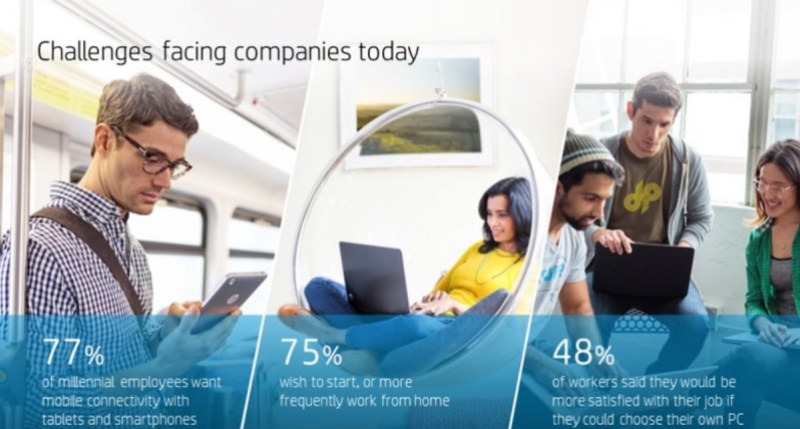 Above: HP device-as-a-service is targeting people who want more flexibility at work.

“The challenge facing companies today is there is a lot going on, and technology enables us to live truly blended lives” between work and play, Park said. “That line of where you are doing it crosses everywhere.”

Millennials in particular want access to a broader set of IT devices. About 77 percent want mobile devices such as tablets and smartphones for use at work, and 75 percent of them want to work more at home. Most IT managers don’t have sufficient resources to procure and manage the range of devices that the employees want. And 48 percent of workers say they would be happier if they could choose their own computer for work.

By 2020, HP predicts there will be 9 billion commercial devices, or four devices per employee. Park said that companies want to stretch out the use of their computers to something like six years, but that makes the devices obsolete for a longer period of time, and it also presents security risks.

“We constantly hear from IT managers that they want a partnership instead of vendorship,” Park said. “That is why we went forward with creating HP DaaS.”

The offerings have evolved over a couple of years, and it has improved employee flexibility and cost predictability, Park said. HP has a standard, enhanced, and premium version of the DaaS program. The contract terms range from one year to five years.