The four most expensive words in the English language are “this time it’s different.”

It’s different this time because the credit-driven global U.S. economy is burdened with a monumental level of financial obligations relative to GDP.  According to the Bank of International Settlements (“BIS”), loans and debts outstanding which burden corporations, households, and the government in the United States have reached $48.3 trillion in the United States or 250% of GDP.  Including off-balance sheet items, the effective level of debt outstanding is almost $100 trillion, at $99.6 trillion, or more than 500% of GDP.  It’s different this time because the U.S. economy has never piled on so many financial obligations.

With that said, it’s also not at all different this time, because this is not the first time in history that a society’s financial obligations have grown to unsustainable levels.  As just one example, students have amassed more than $1.5 trillion of student loans, which have increased at a rate of more than 10% per annum since 2006.  This story has been repeated often through history, and it usually ends in pain for those who hold their savings in cash or bonds.  The downside risk today for investors trying to save for retirement is captured in Charles Bullock’s account of Dionysus of Syracuse, from more than 2000 years ago.

Having borrowed money from citizens of Syracuse and being pressed for repayment, he [Dionysus] ordered all the coin in the city to be brought to him, under penalty of death.  After taking up the collection, he re-stamped the coins, giving to each drachma the value of two drachmae, so that he was enabled to pay back both the original loan and the money he had ordered brought to the mint.

Displaying a level of creativity that could compete with today’s central bankers, Dionysus defaulted on his debts, to the detriment of Syracusans who held their savings in drachmae.  When a debt obligation becomes too big to repay, it’s no longer a problem for the debtor; it’s a problem for the creditor.  The warning caveat emptor, which translates to “buyer beware,” is timeless because “this time” is hardly ever different.

Credit to households ($15.25 trillion or 79.7% of GDP): U.S. household debt includes $10.1 trillion of mortgage debt, $1.5 trillion of student debt, $1.1 trillion of auto loan debt, and $0.8 trillion of credit card debt.  While still very high, the level of household debt relative to GDP has declined slightly over the past ten years due to the many mortgage-related defaults that have occurred since the financial crisis.  Nevertheless, household debt has increased dramatically at a rate of over 7.1% per annum during the past forty years as household income has simply not kept pace with increases in living expenses for most Americans, particularly with regards to healthcare, housing, and education expenses.

Credit to Non-Financial corporations ($14.26 trillion or 73.5% of GDP): Corporate debt is at a record level and continues to grow, driven by corporate buybacks and the growth of capital raised by the leveraged buyout industry.  Currently, credit to non-financial corporations relative to U.S. GDP exceeds even the 72.5% leverage level that occurred during the financial crisis.  Record issuance of corporate bonds and leveraged loans in recent years have boosted the share prices of both public and private companies, driving compensation increases for management teams and private equity firms.  This strategy works brilliantly when corporate credit expands from reasonable levels, but the liquidation of Toys “R” Us stores across the United States is a telling reminder of the downside of corporate financial engineering. 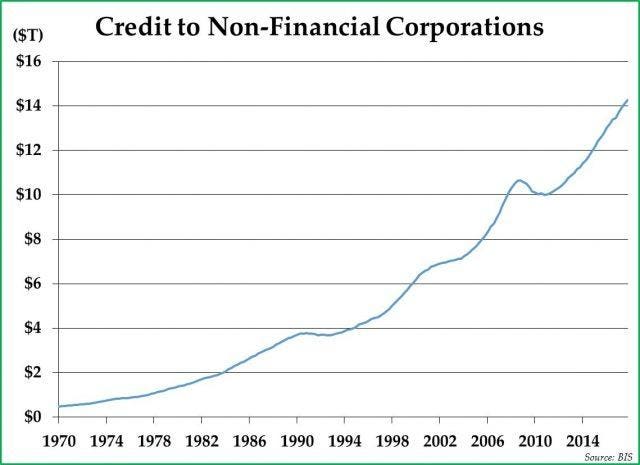 Government debt ($18.81 trillion or 97.0% of U.S. GDP): Government debt includes $3.1 trillion owed by various state and local governments along with $15.4 trillion owed to the public by the Federal government.  These debts are also at record levels and continue to grow at a faster rate than GDP, driven by demographics, wars, deficits generated during the financial crisis, and a persistent mismatch between tax revenues and spending levels.  Unfortunately, Congress and the Trump administration further damaged the Federal government’s financial strength by passing the Tax Cuts and Jobs Act (TCJA) of 2017, which will increase future U.S. government deficits by almost $1.5 trillion per annum during the next decade and by approximately $1.0 trillion per annum thereafter, and that’s making the unrealistically optimistic assumption that recessions no longer take place. 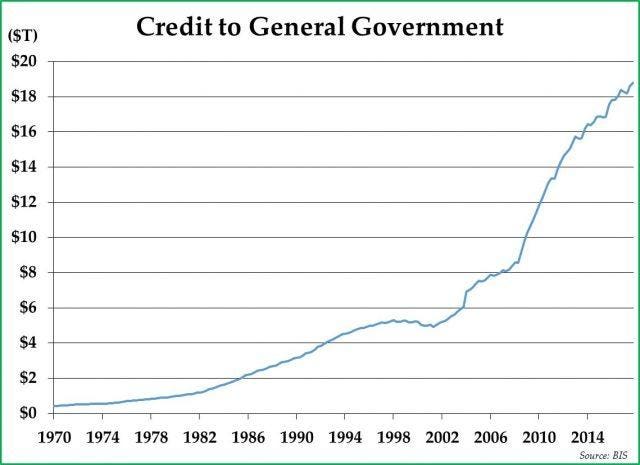 Pension underfunding ($2.25 trillion or 11.6% of GDP): While not officially tallied on anyone’s balance sheet, pension plans are woefully underfunded and represent an enormous off-balance sheet liability for cities like Chicago, states like Illinois, and multi-employer pensions.  According to the Center for Retirement Research at Boston College, state and local pension plans are only 71.7% funded today, representing a total shortfall of $1.7 trillion.  Surprisingly, these unfunded obligations have more than doubled since 2009 despite a strong bull market in the prices of all kinds of financial assets, from stocks to bonds to private equity investments.  Meanwhile, multiemployer pension plans are only 46.4% funded, with a corresponding unfunded liability of $0.5 trillion.  Eventually, it seems more likely than not that the Federal government will take on these liabilities in order to protect the retirement plans of millions of retirees. 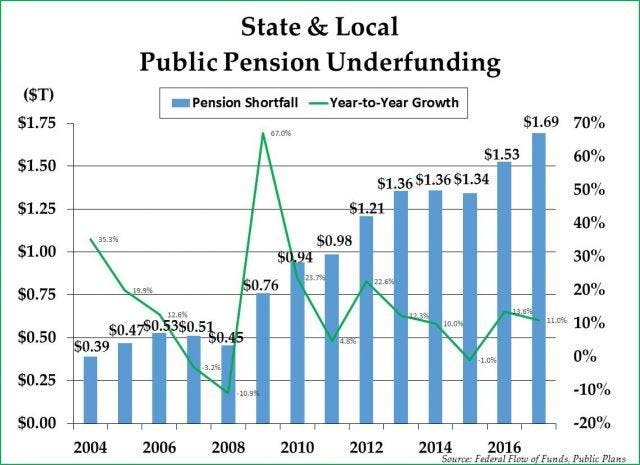 Social insurance obligations ($49.0 trillion or 253% of GDP): Every day, 10,000 baby boomers retire and begin collecting social security and Medicare benefits for the first time.  According to U.S. GAO estimates, the net present value of the Federal government’s social security obligations is $15.4 trillion, or 79.4% of GDP, while the net present value of Medicare Part A, B, and D is $33.5 trillion, or 172.8% of GDP.  Because most of these obligations represent benefits to the elderly, these costs are driven by demographics and runaway healthcare price inflation.  The net present value of U.S. social obligations is difficult to precisely estimate and could be reduced (or increased) significantly by policy changes.  For example, legislation to allow the re-importation of drugs into the United States from Canada would likely have a dramatic effect on pharmaceutical prices, reducing the Medicare obligation by trillions of dollars.

Why These Obligations Are a Problem

As debts have increased and as interest rates have been increasing, interest payments for U.S. corporations, households, and government entities are now almost two trillion dollars annually, representing almost 10% of U.S. GDP.  If interest rates were to rise to historical levels, these interest rate payments would crush the U.S. economy and likely result in another debt crisis.  Even without the Federal Reserve raising interest rates further, interest payments should exceed 10% of GDP sometime in 2018. These payments keep households from saving money for a rainy day, corporations from investing in new factories, and governmental entities from investing in basic infrastructure. 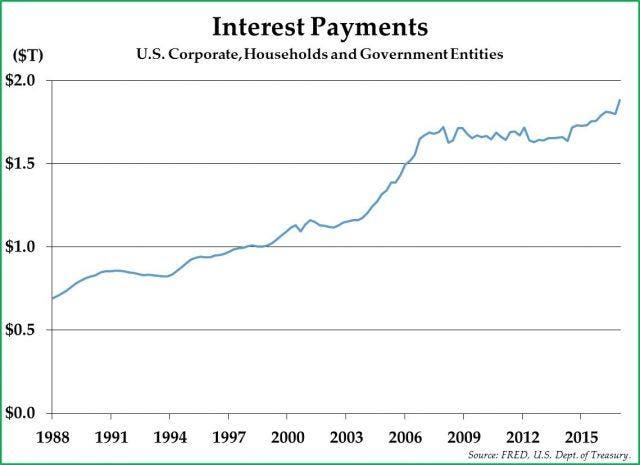 With global interest rates near all-time lows but starting to climb, with U.S. equity valuations near all-time highs but starting to weaken, with large-scale trade wars looming, with energy prices rising, and with a global economy seemingly dependent on further credit expansion to grow, it could easily seem like there’s no place to hide for frustrated investors who are just trying to save and invest for retirement.

Such frustrations are well-founded. It is indeed difficult for investors to find a place to hide today from an investment standpoint, and the ancient Syracusans will tell you that just holding cash comes with its own risks.  But that doesn’t mean it’s impossible; it just requires thought, prudence, and a long-term investment perspective.

In Part II of How To Invest In An Era Of $100 Trillion Financial Obligations, we’ll discuss some of the risks and opportunities that these monumental debt obligations represent for investors.

I described how burdened the U.S. economy has become by the growth of private and public debt over the past forty years. Excessive financial obligations are not just a problem in the United States; while the combined private and public debt/GDP ratio is 252% in the United States, countries like the United Kingdom, China, Japan and Canada have debt/GDP ratios of 283%, 256%, 373% and 289% respectively (source: BIS). In this article, I will discuss the policy implications and, relatedly, how to invest in an era in which debt/GDP ratios across the world have reached record and seemingly unsustainable levels.

In the aftermath of World War II, financial repression helped to reduce the Federal debt/GDP ratio in the United States from 106% in 1946 to 22% by 1974.  Thus far, these policies have not worked as successfully as they did after World War II, as the debt/GDP ratio has only continued to increase since the Financial Crisis. Also, more recently, Congress and the Trump administration have enacted revenue cuts along with budget increases which should further increase the budget deficit and government debt. For those reasons, the likelihood of a surprise burst of elevated inflation seems to be increasing.

If successful, financial repression should reduce the real value of U.S. financial obligations and reduce wealth inequality over time.  However, it also creates challenges for people who are planning to save and invest for retirement. Given the high probability of a protracted negative interest rate environment, it will be more important than ever to maintain a high savings rate to grow your assets over time.

At the present moment, interest rates and inflation are rising, U.S. stocks are generally expensive, geopolitical risks are increasing and the economy, while seemingly firing on all cylinders, has been expanding for nearly a decade. Given this backdrop, taking asset allocation measures that err on the side of prudence and defensiveness seems appropriate.

Set forth below are my thoughts on the relative attractiveness of various investment options:

In summary, it makes sense to be wary of rising interest rates and compressing P/E ratios which can often accompany inflation. In this environment, you should consider holding a diversified portfolio of investments that should probably include short-term bonds, inexpensively priced stocks, of which there are few in the United States right now, along with hard assets and companies whose earnings are most likely to benefit from accelerating inflation.