iFixit is back doing what it does best – tearing into the latest Apple products to get a better look at what the newest premium devices have to offer. Following the launch of the iPhone 8, iPhone 8 Plus, and iPhone X, iFixit has begun its teardown work – starting with the iPhone 8. The teardown not only confirms what we know about battery and waterproofing, but also some other minute details of the iPhone 8.

When Apple launched the iPhone 8, it confirmed that the newest models come with batteries smaller than their predecessors. To be more specific, the iPhone 8 features a a3.82 V, 1821mAh battery, compared to the 1960mAh battery inside the iPhone 7 – and iFixit confirms this. That would have been a cause for concern for many, but given Apple’s optimisation and the battery efficient A11 Bionic chipset, the iPhone 8 and iPhone 8 Plus should last just as long as their predecessors despite having smaller batteries.

On the back side of the board, iFixit found a Toshiba TSBL227VC3759 64GB NAND flash storage, Qualcomm WTR5975 Gigabit LTE RF transceiver and PMD9655 PMIC, Apple’s own WiFi/Bluetooth/FM radio module, among other things. 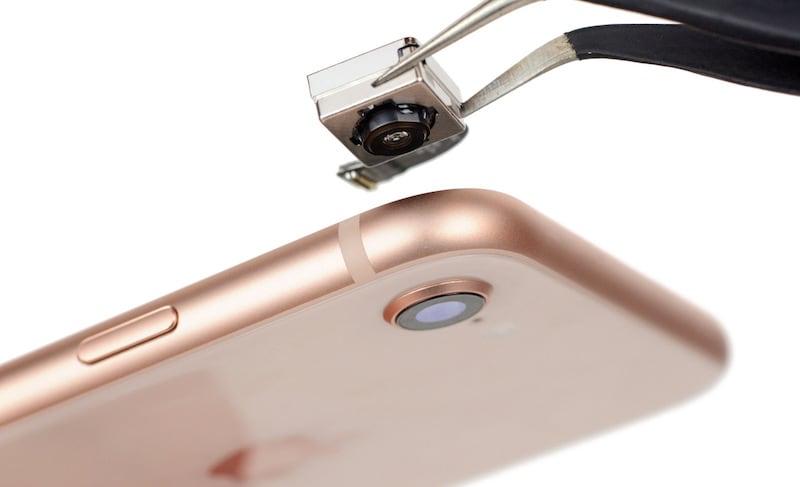 During the teardown, iFixit noticed the same seals, rubber gaskets as the iPhone 7 and some added adhesive, which is not a bad thing as far as water resistance goes. Both the iPhone 7 and iPhone 8 are IP67 certified. It also plucked the main camera module confirming the same f/1.8, 6 element lens as the iPhone 7, but with bigger sensors. This means larger individual pixels, more light and improved colours with the iPhone 8. iFitix also noticed magnets in the four corners of the camera that would give the camera some advanced vision through OIS.

The rear casing also keeps the Qi enabled wireless charging coil that uses an oscillating magnetic field to generate an alternating current, which is then converted into direct current to charge up the battery, iFixit explains. The three new iPhone announced by Apple are the first by the company to support wireless charging. The teardown also revealed a new Lightning port bracket that better reinforces the connector. Notably, since the new iPhones come with glass backs, iFixit had to work a little harder to remove the glass layer, which seems to be a down side as far as repairability is concerned.

Those who want a complete breakdown of the iPhone 8 can head over to iFixit’s website. You can also expect them to teardown the iPhone 8 Plus, Apple Watch Series 3, and Apple TV 4K soon enough, while you may have to wait a bit longer for the anticipated iPhone X teardown.