With Jio continuing to make waves in the telecom industry with its Jio Dhan Dhana Dhan Offer and other plans, Airtel has launched a few new plans to take on the newest telco on the block. Among the new data plans the country’s biggest operator has launched recently are the Rs. 349 and Rs. 5 prepaid recharge packs. Both are data-heavy plans and come with bundled calls, the market trend nowadays. Alternatively, Airtel users can also opt for the cashback offer the company is providing on recharges. Check out the details of the new plans below. With this new plan, Airtel would be aiming to stem the flow of consumers to Jio, which amassed 125 million consumers in less than a year of its launch on the back of its free calls and ultra low-cost 4G data. 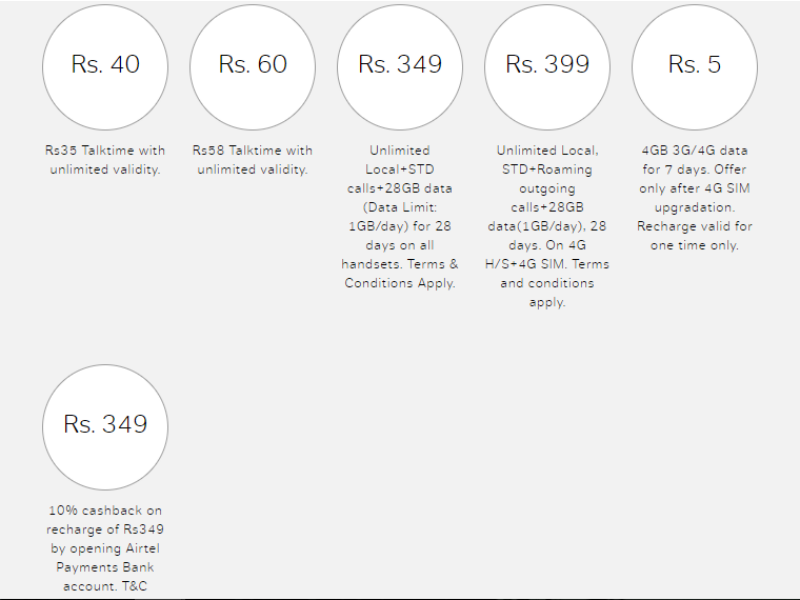 This plan takes on the Rs. 349 Jio pack that offers bundled data, unlimited calls to all networks, and free SMSes for 56 days. The consumers buying this pack get 10GB data for the first 28 days of the validity period, and another 10GB data for the remaining 28-day validity period. Vodafone also has a Rs. 392 pack with 1GB data per day for 28 days and unlimited calls.

The Rs. 399 plan with 84 days validity that Airtel launched last month has seen a change too. Instead of the original 84 days validity, users will only get 28-day validity with the plan now. The plan also comes with bundled calls with the same caps on free minutes as the Rs. 349 plan. This essentially makes the Rs. 399 pack the same as the Rs. 349 plan, except that the former has free roaming outgoing calls as well; there was no free roaming when the plan was launched in August.

Airtel is also providing a Rs. 5 recharge pack with 4GB of bundled data for consumers who upgrade to the company’s 4G SIM. It is a one-time pack, meaning you will not get this offer again after the first recharge. The validity of this pack is 7 days, and there are no bundled calls.