The youth movement in New York is officially underway.

In the days and weeks leading up to the 2018 NBA draft, many mock drafts had the Knicks selecting Villanova’s Mikal Bridges, an established championship performer with four years of collegiate experience under his belt. Bridges would have been a solid, safe pick. He turns 22 before the start of next season and would have been able to contribute on both ends of the floor right away.

Instead of going the conservative route, the Knicks front office swung for the fences and selected Kentucky’s Kevin Knox, hoping to hit a home run. At just 18 years old, Knox has proven far less on the floor than Bridges and many other prospects in this draft class, but very few players possess the physical gifts and corresponding upside of Knox.

BOISE, ID – MARCH 17: Kevin Knox #5 of the Kentucky Wildcats reacts during the first half against the Buffalo Bulls in the second round of the 2018 NCAA Men’s Basketball Tournament at Taco Bell Arena on March 17, 2018 in Boise, Idaho. (Photo by Kevin C. Cox/Getty Images)

When dissecting game tape of Kentucky’s 2017-18 season, the flaws in Knox’s game are apparent. His effort on the defensive end was inconsistent. He also didn’t rebound as aggressively as one would hope for a player with his size. (This lack of rebounding could be an issue when he’s eventually paired alongside Kristaps Porzingis.) Offensively, he appears to have the total package, but was inefficient in college, shooting just 44.5% from the floor and 34.1% from downtown. He often settled for long 2’s instead of attacking the tin or stepping back behind the 3-point arc.

However, he did average a team-high 15.6 points. The form on his jumper is terrific; a smooth, repeatable delivery. He can rise up and fire over the top of smaller defenders, and blow by taller, bulkier opponents in space. He’s not afraid to put the ball on the floor and can finish effortlessly with either hand around the rim. Knox has already developed a deadly floater (rare for a player his age) that he can unleash within 15 feet of the basket, keeping defenders off balance. He’s also already shown an ability to navigate screen-and-rolls effectively. According to Synergy Sports, Knox scored .93 points per half-court possession last season. The only three freshmen in the country to score at a higher clip were the top three picks in the draft (Deandre Ayton, Marvin Bagley and Trae Young).

And then there are the things you simply can’t teach. Knox measures in at 6’9” with a wingspan just a quarter-inch shy of seven feet. The combination of that size with his athleticism, agility and lateral quickness is what makes scouts drool.

“He fits what we’re going to be about,” GM Scott Perry told reporters after the draft. “What we’ve talked about from the very beginning — he’s long, he’s athletic, he can play multiple positions. I think he has tremendous upside. He’s coming from a program at Kentucky that’s produced a lot of great pros, so we know he’s been challenged there by Coach Calipari.”

In the lexicon of today’s NBA, “positionless basketball” is a trendy phrase. Teams throughout the league are desperately searching for lanky wings that can shoot effectively from the perimeter and guard almost everybody on the other end of the floor. In theory, this is precisely what Knox brings to the table.

In the second round, the Knicks rolled the dice on another young player with an enticing upside. With the 36th overall pick, New York selected Mitchell Robinson. The big man out of Louisiana was a highly-touted McDonald’s All-American who had initially enrolled at Western Kentucky before deciding to skip his freshman season to train for the draft.

There are plenty of questions marks and red flags associated with this youngster, but the upside is undeniable. In Rivals.com final ranking of the high school Class of 2017, Robinson ranked 9th overall, just behind Collin Sexton and Wendell Carter, and one spot in front of Kevin Knox.

Robinson is a seven-footer with a monstrous 7’4” wingspan and 9’3” standing reach. He is bouncy and has impressive leaping ability for a center his size, which allows him to play above the rim. Robinson dominated defensively in high school, using his long arms and quick reflexes to block shots at a remarkable rate. An elite rim-protector, he led the EYBL with 5.6 blocks per 36 minutes in 2017. Although his technique needs plenty of work, he has decent lateral quickness and does a relatively good job of staying in front of quicker opponents on the perimeter after switching off screens, which is crucial in the NBA.

Still, this is a kid that needs a lot of coaching and mentoring, both on and off the floor. His decision to skip school was controversial, and he was incredibly raw even before taking a year off. 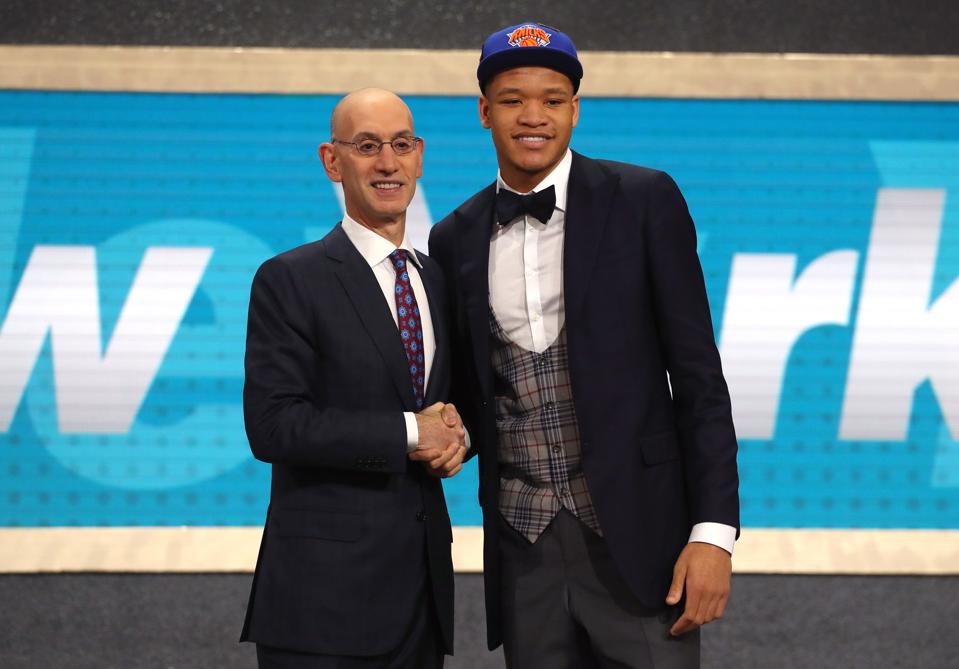 NEW YORK, NY – JUNE 21: Kevin Knox poses with NBA Commissioner Adam Silver after being drafted ninth overall by the New York Knicks during the 2018 NBA Draft at the Barclays Center on June 21, 2018 in the Brooklyn borough of New York City. NOTE TO USER: User expressly acknowledges and agrees that, by downloading and or using this photograph, User is consenting to the terms and conditions of the Getty Images License Agreement. (Photo by Mike Stobe/Getty Images)

By selecting two young, raw athletes, the Knicks are not only investing in youth and athleticism, but they are also betting heavily on their coaching staff’s aptitude and the franchise’s ability to develop young players. This has not been a strength of the Knicks in the past. In fact, the last New York draft pick to sign a multi-year extension after his initial rookie deal was Charlie Ward, way back in 1999.

The Knicks are years away from being genuine contenders. They can afford to patiently build up their organization the right way, and properly develop their young assets. It’s important to keep in mind that last year’s first-round pick, Frank Ntilikina, is still just a teenager as well. In fact, Ntilikina is younger than draftees Deandre Ayton, Mohamed Bamba, Michael Porter Jr., Miles Bridges, Shai Gilgeous-Alexander, and most other 2018 first-round selections. 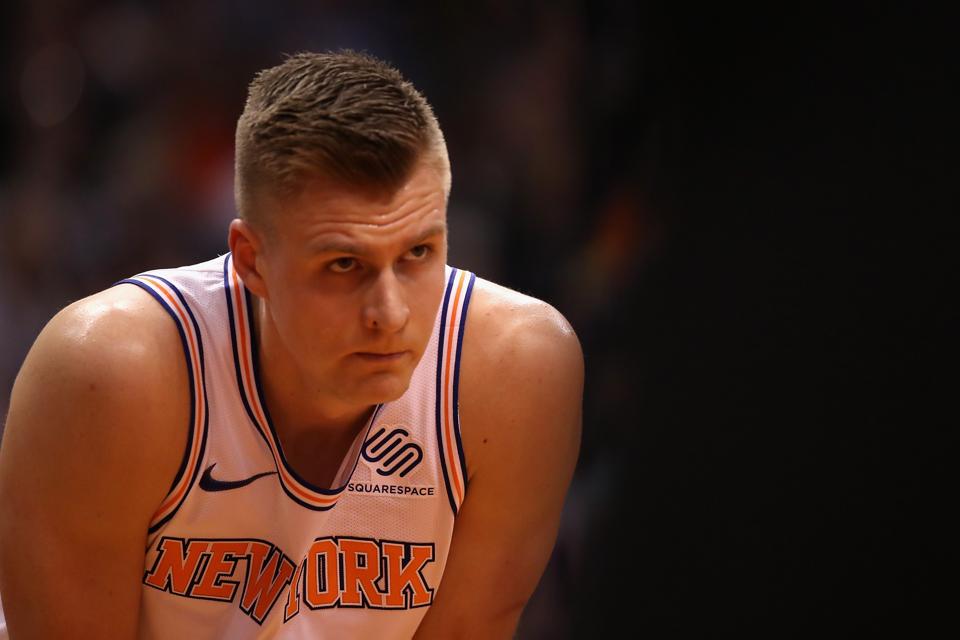 PHOENIX, AZ – JANUARY 26: Kristaps Porzingis #6 of the New York Knicks during the NBA game against the Phoenix Suns at Talking Stick Resort Arena on January 26, 2018 in Phoenix, Arizona. NOTE TO USER: User expressly acknowledges and agrees that, by downloading and or using this photograph, User is consenting to the terms and conditions of the Getty Images License Agreement. (Photo by Christian Petersen/Getty Images)

These players haven’t even begun to scratch the surface of their vast potential. However, there is no guarantee that they reach the heights New York fans are envisioning. It’s up to the Knicks organization to help ensure they eventually fulfill their promise.