Back in February, new Knicks general manager Scott Perry acquired former lottery pick Emmanuel Mudiay. Some New Yorkers were puzzled by the move, as the Knicks already had three point guards on the roster, including two fellow lottery picks in Frank Ntilikina and Trey Burke.

Perry explained the organization was in a “talent-acquisition phase,” which meant the team was looking to infuse talent via any avenue that presented itself. In June, Perry drafted 18-year Kevin Knox with the Knicks’ first pick, and gambled on a talented, but raw and unproven center, Mitchell Robinson, in the second round. Earlier this month, Perry used the bulk of the Knicks mid-level exception to sign another former lottery pick, Mario Hezonja, who was selected 5th overall (one spot behind Kristaps Porzingis) in the 2015 draft. Overall, nine current Knicks were drafted inside the top-10. Of the 45 players drafted ninth or higher over the last five years, six of those 45 (13.3%) are now Knickerbockers. All six are 23 or younger, and two are teenagers.

Roster spots are extremely valuable in today’s NBA. League rules dictate that each team can carry only 15 players during the season, along with two players on two-way contracts. Thus, many of the league’s top teams need to maintain a strong bench to scratch and claw for wins throughout the regular season.

One benefit of being a rebuilding team is that roster spots don’t necessarily have to be dedicated to players that will help you win right away. Organizations that are not yet ready to compete immediately have the luxury of devoting roster space to high draft picks that haven’t reached their potential in previous spots.

During this phase of talent acquisition, the Knicks can comfortably purchase plenty of lottery tickets, in hopes that one or two of them blossom in the Big Apple, and become a part of the organization’s new foundation.

Perry and company were at it again on Tuesday, as the team announced they had signed free agent forward Noah Vonleh. Yes, Vonleh is also a former lottery pick. He was selected with the ninth overall pick in the 2014 draft. Vonleh was just 18 years old when his name was called on draft day. Despite having already accrued four years of NBA experience, he’s only 22, which is the same age as four players drafted last month (Grayson Allen, Jevon Carter, Khyri Thomas and Keita Bates-Diop). 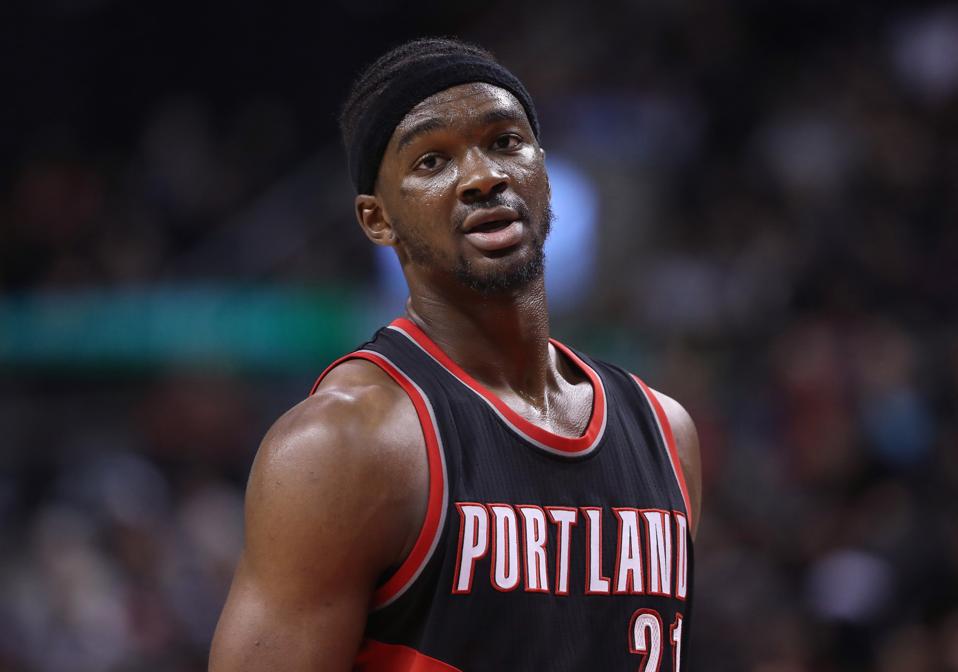 TORONTO, ON – FEBRUARY 26: Noah Vonleh #21 of the Portland Trail Blazers during their game against the Toronto Raptors during NBA game action at Air Canada Centre on February 26, 2017 in Toronto, Canada. (Photo by Tom Szczerbowski/Getty Images) NOTE TO USER: User expressly acknowledges and agrees that, by downloading and or using this photograph, User is consenting to the terms and conditions of the Getty Images License Agreement. (Photo by Tom Szczerbowski/Getty Images)

Like Mudiay, Burke and Hezonja before him, the reason Vonleh was available is because he’s fallen short of expectations up to this point in his career. However, there is reason to believe Vonleh can grow into a reliable rotation player next season.

First and foremost, it’s important to note that he’s already played for three different teams. After his rookie season in Charlotte, he was traded to Portland, along with Gerald Henderson, in exchange for Nicolas Batum. The then Blazers dealt him to Chicago this past February. This youngster had to learn three different offensive systems, under three different head coaches. All the while, he hasn’t been the beneficiary of consistent playing time. It’s understandably difficult to establish oneself under such volatility and uncertain conditions.

Encouragingly, Vonleh flashed some enticing potential during his brief stint in Chicago. He appeared in 21 games for the Bulls, including four starts, and averaged 6.9 points, 6.9 rebounds and 0.9 3-pointers in 19 minutes per contest.

For the season, he was remarkably effective in the limited playing time he received, averaging 10.9 points, 12.8 rebounds and 0.8 treys per-36 minutes. Per Basketball-Reference, there were only two other players in the entire league to match or exceed that production in 2017-18: Joel Embiid and DeMarcus Cousins. Previous to this past season, the only two qualified players to post that level of the per-minute output were Kevin Love and Charles Barkley.

Vonleh is precisely the type of player the Knicks should roll the dice on. A young, underdeveloped lottery pick that carries minimal risk, but potentially a handsome reward. In order to take his game to the next level, Vonleh will likely have to develop into a stretch-4. He has already proven he can be a solid rebounder, as his rebound rate ranked inside the top-20 among all players in 2017-18. However, over the last two seasons, he’s shot 31.4% from downtown. If he can boost that number up close to league-average (36%), he’ll have a chance to transfer that potential into consistent production.

With the addition of Vonleh, the Knicks now have 16 players under contract. Thus, they will need to trade or waive one by Opening Night to get down to 15.

Assuming New York does not make any additional moves before October, the players competing for a final roster spot will likely be Damyean Dotson, Emmanuel Mudiay and Ron Baker. Both Mudiay and Baker have fully guaranteed salaries in excess of $4 million. While it would be tough to swallow that salary, a player like Baker just doesn’t have the same upside as Vonleh. Trey Burke is the only Knick without a guaranteed contract, but it is unlikely New York would part ways with him after his undeniably impressive play over the final two months of the 2017-18 campaign. 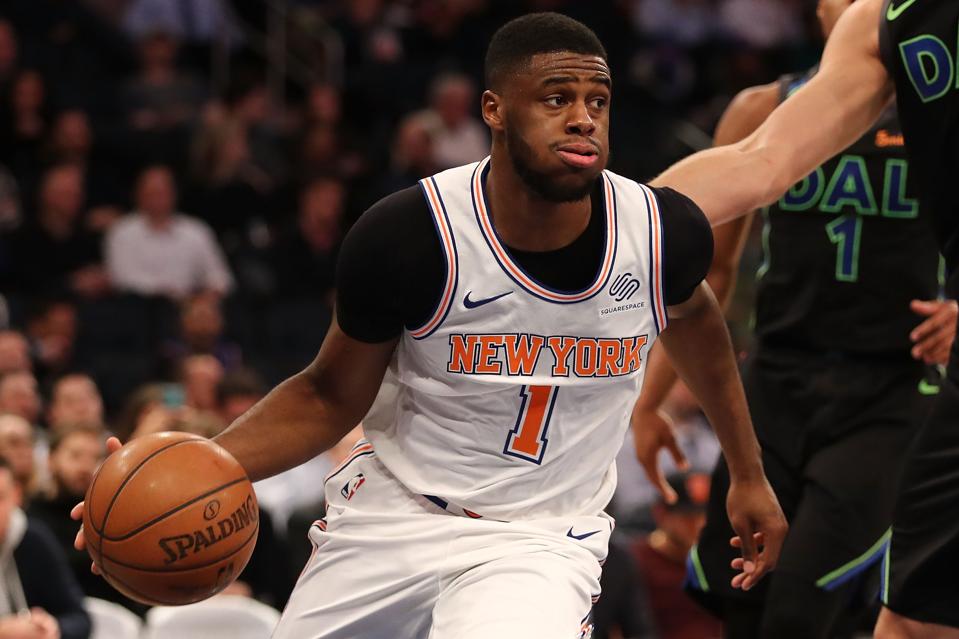 NEW YORK, NY – MARCH 13: Emmanuel Mudiay #1 of the New York Knicks dribbles towards the basket in the third quarter against the Dallas Mavericks during their game at Madison Square Garden on March 13, 2018 in New York City. NOTE TO USER: User expressly acknowledges and agrees that, by downloading and or using this photograph, User is consenting to the terms and conditions of the Getty Images License Agreement. (Photo by Abbie Parr/Getty Images)

Joakim Noah is owed $37.7 million over the next two years, and waving him via the stretch provision after September 1st remains an option as well. Enes Kanter opted into the final year of his deal, New York signed Luke Kornet to a one-year contract, and second-round steal Mitchell Robinson exceeded expectations in Las Vegas, so the Knicks should still have solid depth at center if they get rid of Noah.

The other route the team will surely pursue is trading one of their veterans. I suggested earlier this month that they explore moving Tim Hardaway Jr. Another wing that could potentially draw interest on the trade market is Courtney Lee, who has two years and $25 million left on his contract.

The Knicks are clearly far from a finished product. And it’s entirely possible their most recent half-court heaves end up as airballs. But, for the first time in a long time, New York’s management team is playing the right way; building towards the future by aggressively investing in talent, youth and untapped potential.