Compared to virtual reality, augmented reality has been slow to take off. Sure, phone-based augmented reality is getting a bit of a boost right now — Apple and Google are certainly investing in it — but there’s still a dearth of commercially-available headsets. Devices like HoloLens and the Meta 2 are too expensive, and while there are startups that promise more affordable models, they’re still years away from being on store shelves. Lenovo, however, has come with a solution — and it’s partnered with Disney to bring it to the masses. The caveat? It only works with one game (at least for now) and that’s Star Wars: Jedi Challenges. We saw a teaser of Star Wars: Jedi Challenges a few months ago at a Disney fan event, but now we know that it’s the name of both the game as well as the hardware kit required to play it. The bundle includes a headset called the Lenovo Mirage, the hilt of a lightsaber and a movement-tracking beacon that you put on the floor. The beacon requires two AA batteries while the lightsaber comes with a rechargeable 550 mAh battery.

To get started, you download the game onto your phone — it’s available on both Android and iOS — and then you slide the phone into a tray located inside the Mirage. As you start the game, it’ll offer you instructions on where to put the aforementioned beacon, which the headset’s two cameras use to track your location in the room. The cameras are also used for inside-out tracking — basically sensing where your head is — and for figuring out the position of that blue-tipped lightsaber. 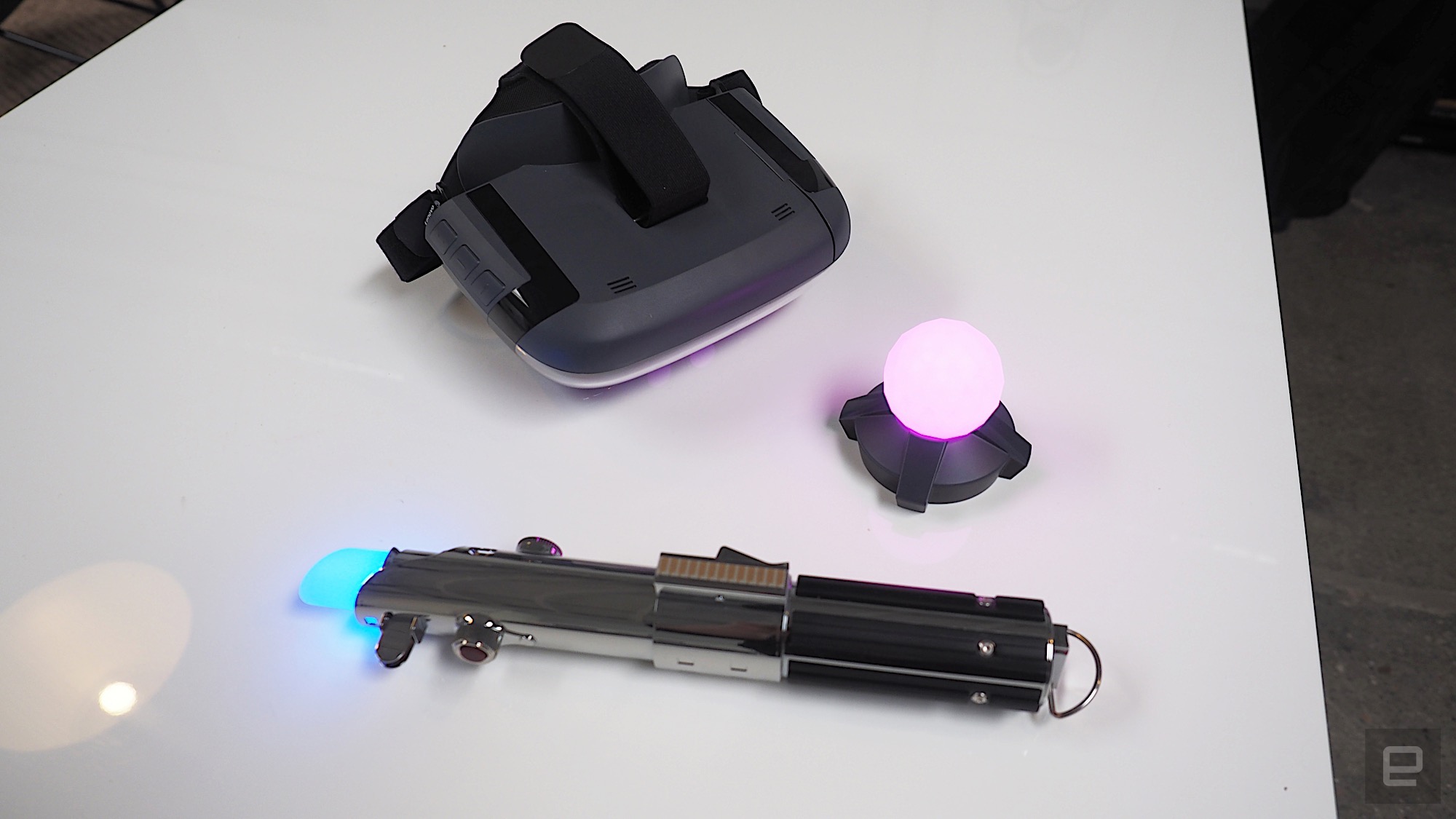 I had a chance to try the headset at a recent Star Wars press event, and right off the bat, I marveled at how lightweight it felt on my head. It accommodated my glasses just fine, and I was strapped on within just a few seconds. As the Mirage is an AR headset, I could see the world around me through a clear lens, but with virtual elements floating in my line of sight. Since the headset uses the phone for its display — there are mirrors that reflect it — the quality of the image depends on the phone’s screen. The one in the demo was a Moto Z, and looked great to me, despite my short time with it. And unlike on HoloLens, the field of view on the Mirage is pretty big. It has a vertical field of view of 33 degrees, and a horizontal FOV of 60 degrees (By contrast, the HoloLens’ FOV is 17 degrees vertically and 30 degrees horizontally).

Mere seconds into my demo, I was launched right into a lightsaber battle with Kylo Ren. With a push of a button, the toy hilt I held in my hand came to life. A beam of blue light shot out of it, instantly transforming into a lightsaber. Magically appearing in the middle of the press demo area was Kylo Ren, who charged at me with a red lightsaber of his own. To block him, I was instructed to line up my saber with random yellow bars that appeared across the screen. And in order to attack, I simply had to step forward and strike him with the best sword-slicing moves I could muster. With the right combination of blocks and attacks, I eventually whittled Kylo’s health down to zero, and was ultimately triumphant.

It was a really fun and immersive experience, and I liked the haptic feedback I got whenever I blocked or took a hit. Plus, as I usually tend to get a little motion-sick when trying out VR headsets, I was really glad that I didn’t feel any nausea at all. What’s more, since I could see my surroundings, I didn’t have to worry about accidentally whacking someone in the head as I swung my lightsaber around. 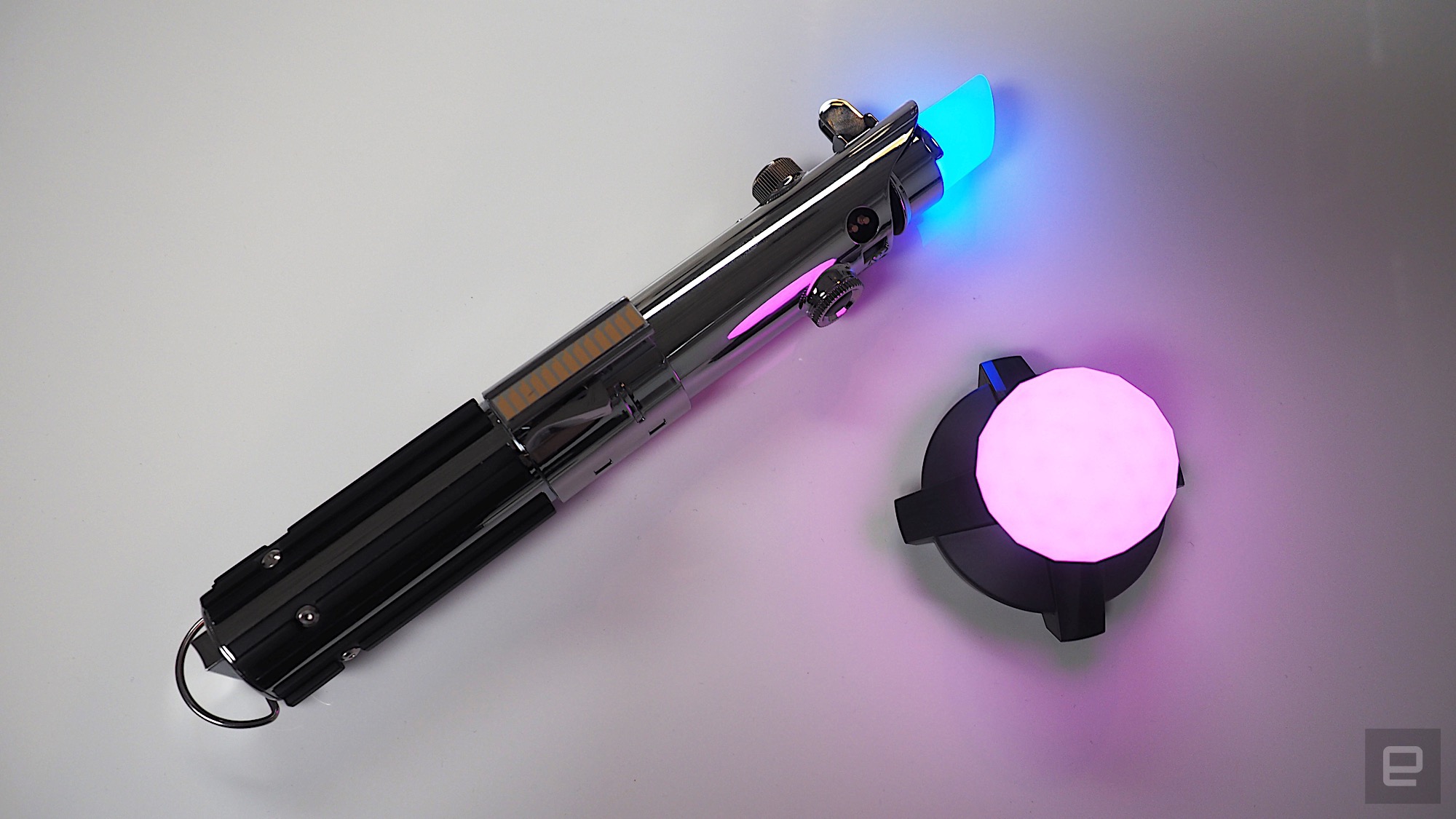 Mike Goslin, a VP of Advanced Development at Disney, told me that there’s more to the game than just lightsaber challenges. “In our story, you’re training to be a Jedi. You come across an artifact that recognizes you have The Force.” The artifact in question is the aforementioned lightsaber hilt, of course. From there you’re brought to a map of the galaxy. Each planet has different challenges on it, and unlocking new planets will offer new challenges.

With the lightsaber duels, for example, you have to battle six increasingly difficult opponents, and you unlock new Force powers along the way to use against them. Another part of your Jedi training is to command troops on a battlefield. In this mode, you’re essentially playing a real-time strategy game by ordering around action-figure size troops in a room-scale environment. “You get to play out epic battles, like the Battle of Hoth,” said Goslin, as he showed me an AR video of tiny X-Wing fighters shooting at miniature AT-AT walkers.

And, last but not least, Jedi Challenges also includes training your mind with Holochess, the famous mind-bending game in the movies. Set your tracking beacon on the table, and you’ll see the virtual board and puzzle pieces come to life before your eyes. 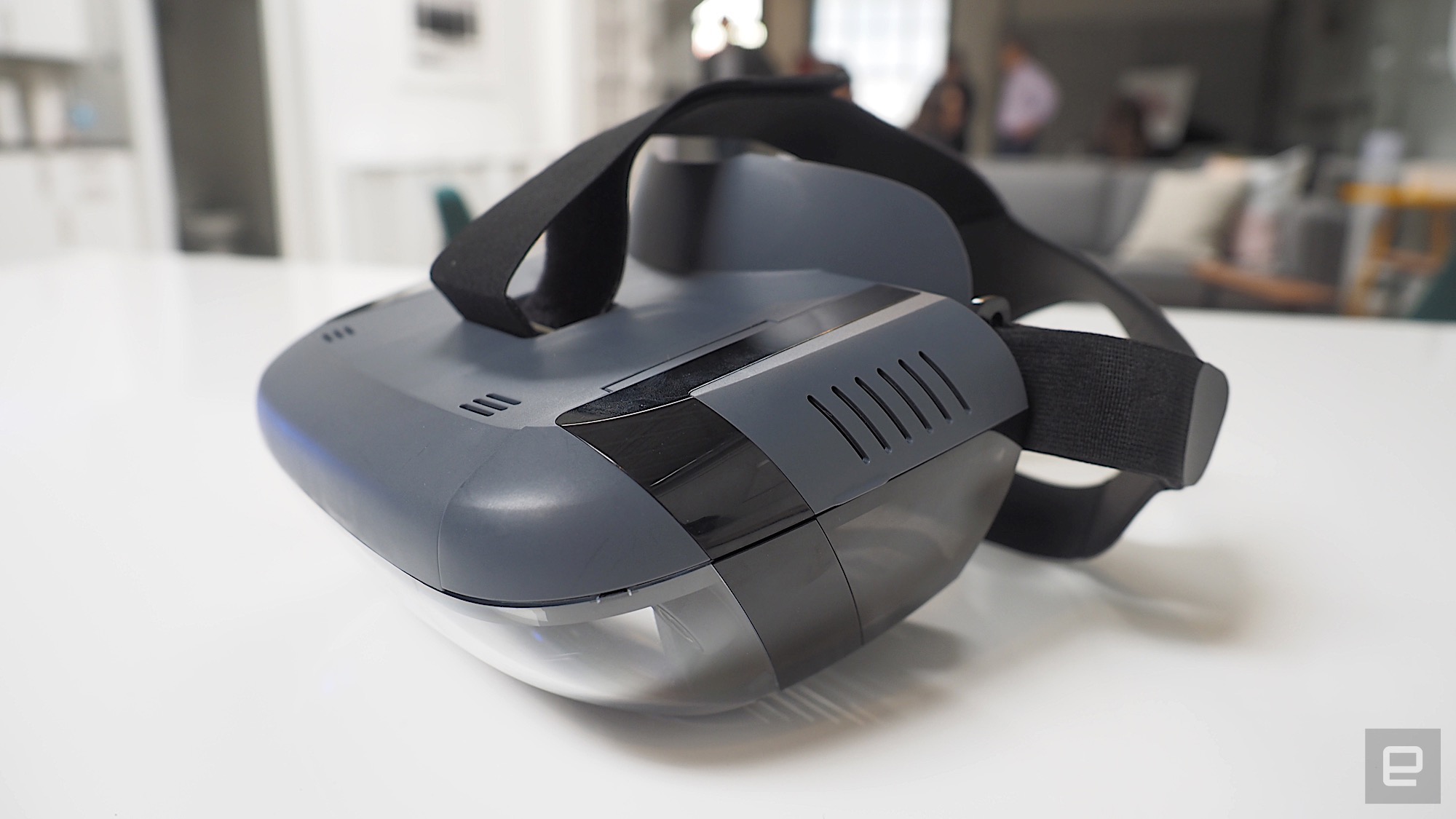 So why AR, and not VR? “One of the great things about augmented reality is that you can see other people,” said Goslin. “In VR, you’re cut off from your surroundings. You can’t move around, and you’re kind of tethered.” This AR experience, on the other hand, has no wires encumbering your movement at all, since it relies on just your phone. “Plus with AR, I can see my friends, I can see my environment. I can move around and engage with society.”

“We like VR,” added Goslin. “But we think AR is very mass-market friendly. And that’s what we’re trying to do here.” Indeed, the Star Wars: Jedi Challenges pack (that includes the headset, the lightsaber hilt and the tracking beacon) will retail for only $199 at launch. Pre-orders start on September 1st on Best Buy and Lenovo.com. If you’d rather wait, it’ll be on store shelves starting in the first week of November.

“We’re taking the AR concept to reality,” said Matt Bereda, Lenovo’s VP of Global Consumer Marketing. “We’re leveraging our hardware experience and teaming it up with Disney.” Bereda also says that, eventually, multiplayer mode would be available, so you’ll be able to play lightsaber duels with your friends.

As for whether you’ll be able to use the Mirage for anything other than Star Wars games, Bereda was cryptic. “We’ll see,” he said. “If everything goes well, maybe there’s a future to expand applications in a different direction.”