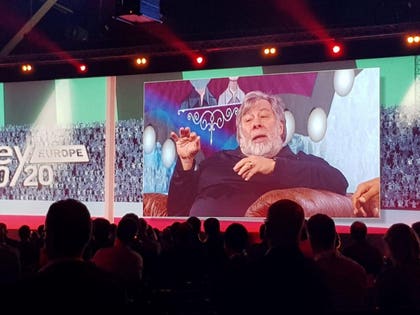 Apple co-founder and tech guru Steve Wozniak has warned the Bitcoin and cryptocurrency faithful they need to remember payments is about people — and not get carried away with the Bitcoin price.

“Steve Jobs wasn’t a computer person, but he was a people person,” Wozniak (who is often fondly referred to as Woz) told the Money20/20 Europe conference in Amsterdam today.

Jobs, who founded iPhone-maker Apple with Wozniak in 1976, is widely regarded as one of the most influential people in Silicon Valley history and helped bring about the personal computer revolution in the late 1990s before kicking off the smartphone revolution with the launch of the iPhone in 2007.

Jobs focused on design and user experience at a time when the computer industry was perceived as clunky and uncool — something that the Mac, the iPhone, the App Store and iTunes helped to change.

Many in the Bitcoin and cryptocurrency industry have complained there is too much focus on the price of Bitcoin and not enough on the user experience — which remains too technical to be used regularly.

Steve Jobs was more of a people person than fellow Apple founder Steve Wozniak. Wider adoption remains a problem for Bitcoin and other cryptocurrencies, with the majority of people using them to buy illicit substances on the dark web and many others holding Bitcoin in the hope the price will rise.