LeBron James added another iconic moment to his brilliant career Saturday night with a one-handed, buzzer-beating, bank shot while drifting away from the basket. The score gave the Cleveland Cavaliers a three-games-to-none advantage over the Toronto Raptors in the Eastern Conference semifinals. Tech giant Intel captured the highlight at the Quicken Loans Arena with more than two dozen 5K ultrahigh-def cameras used to produce stunning 3D replays. 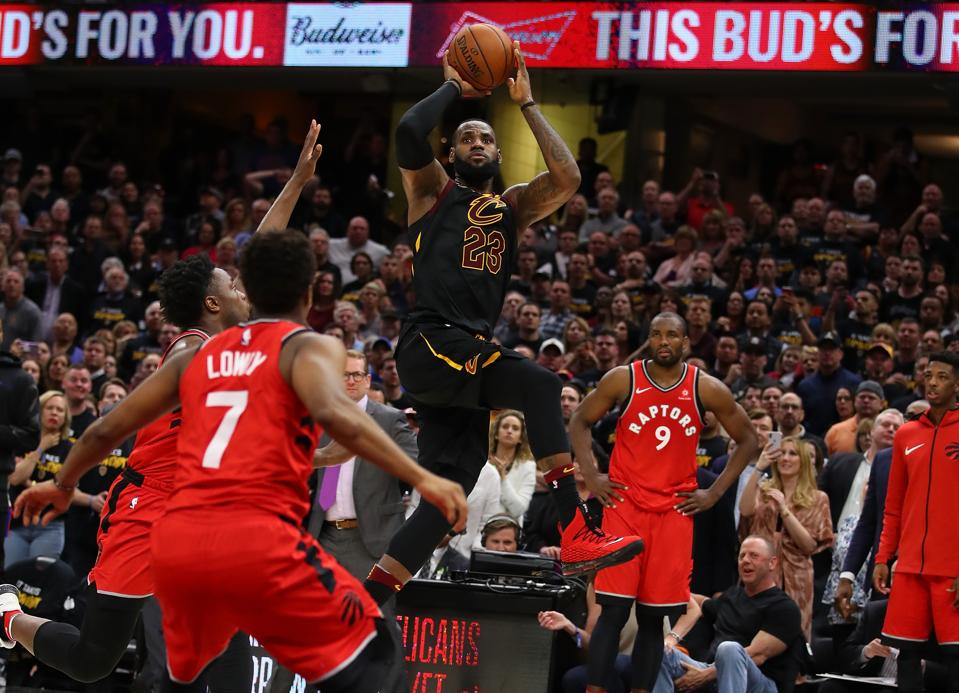 Intel’s technology is a byproduct of its 2016 acquisition of Israeli video tech firm Replay Technologies, several years after the $64 billion-in-revenue chipmaker made a low six-figure investment in the startup. Intel and the NBA want to discover more companies like Replay. The result: the two companies announced plans today for the NBA + Intel Capital Emerging Technology Investment Initiative. The brands will jointly evaluate global technology startups for potential investment and commercial collaboration in a multi-year program. Venture investments in sports reached $1.5 billion in 2017, according to Deloitte.

“We want to help identify, fund and advance the cause of startups that are in the space in the nexus between sports, technology and entertainment,” says Howard Wright, who heads business development at Intel Sports. “We want to create a new immersive media world and to do that you have to digitize and personalize the experience of sports and entertainment.”

Wright joined Intel in 2015 after 14 years at Qualcomm. His first job after graduating from Stanford in 1989: NBA player. He calls his three-year career short and non-illustrious. “It is really fulfilling to see my former employer and my current employer team up on something that can be this transformational in the ecosystem,” says Wright.

Intel and the NBA partnered at the start of this season, making Intel the authorized provider of virtual reality and 360-degree volumetric video for NBA broadcast partners globally. The pair expanded its relationship last month with a deal for Intel to be the official technology partner of the new professional esports NBA 2K League.

The new investment initiative has not made any investments yet but will look at global companies at all stages, with a focus on U.S. firms in the Seed and Series A range. Everything from ticketing to smart arenas to immersive media and in between is in play. Intel will provide most of the capital, with both Intel and the NBA contributing intellectual property, global reach, strategic planning and business development.

Wright stresses that this is not a fund and there are no boundaries on the capital devoted to the initiative. The new venture will be part of Intel Capital, which has invested $12.3 billion in 1,500 companies since its launch as Intel’s venture capital arm in 1991.

The NBA has long been considered the most tech-savvy of the major U.S. sports leagues. It offered League Pass subscribers a game each week in virtual reality this season, powered by Intel, with 12 more VR games in the playoffs. The inaugural season of the 17-team NBA 2K League kicked off last week. The annual NBA All-Star Technology Summit will celebrate 20 years in 2019 and is a must-attend event for leaders in sports, media and tech. NBA team owners Mark Cuban, Steve Ballmer, Vivek Ranadive, Ted Leonsis, Paul Allen and Robert Pera all made their first fortunes in tech ventures.

Wright likens the new venture to a particle accelerator where the reach and might of Intel and the NBA, along with some capital, can advance what these startups could do on their own significantly faster. He is expecting big things from the venture. “We think this is a watershed moment,” says Wright. “We have the audacity to think this is going to be meaningful for years to come.”