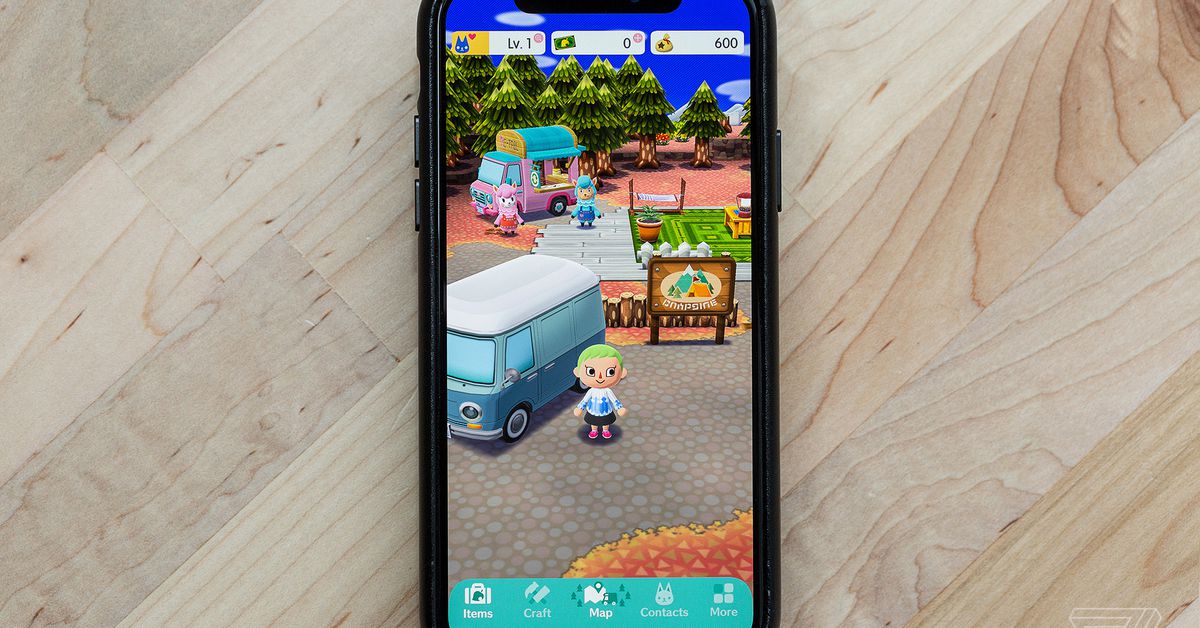 When Nintendo first released Animal Crossing: Pocket Camp on mobile last November, I was into it. The game felt somewhat slight by Animal Crossing standards, however. It lacked the open-ended nature of past games, and it didn’t really offer a whole lot to do. But there’s something about the laid-back, leisurely nature of the series that makes it a great fit for smartphones. It’s a mini escape that you can pull out whenever you need it. For me, these kinds of mobile games have historically turned into a short-lived habit, something I play daily for a few weeks before burning out. But that hasn’t happened with Pocket Camp. Instead, the game has continued to grow and improve. Months later, I still can’t put it down.

The core of the game was always solid and enjoyable. Pocket Camp gives you a tiny slice of campground to decorate however you want, and it surrounds you with animals that you can befriend and run errands for. You can progress at your own pace, and the game has a charm that makes it incredibly inviting. It’s very relaxing to just spend five minutes fishing or watering plants.

Over the last few months, Nintendo has built on that foundation with new features and content. There have been some huge (at least by Animal Crossing standards) changes. You can now craft your own clothes, cultivate a garden, and swap furniture with a confused seagull. These are some of my favorite parts of the game, and none were available at launch. There have also been multiple quality-of-life improvements — die-hard fans of the game got really excited when you could place two carpets on your campground — as well as the expected stream of new characters, furniture, and clothing.

The feature that has me coming back the most, though, is the limited time events. My favorite so far was a fishing tournament, where you could (finally!) get fish tanks in which to display some of your catches. But there have also been gardening contests, where you need to plant certain flowers to attract special bugs, and themed events where you can unlock rare items. Recently, two of these events were going on simultaneously: I found myself playing multiple times a day so that I could gather as much Super Mario and Alice in Wonderland themed items as possible.

These kinds of updates aren’t unique to Animal Crossing, of course. Mobile games and other service-oriented experiences like Fortnite are constantly updated in order to keep people coming back regularly. What makes Pocket Camp stand out is both the frequency and quality of its updates. There seems to be a new event every other week, and for the most part, I’ve enjoyed every one of them. Likewise, even though I play regularly, it feels like there’s always something next for me to build toward. I only just installed a pool at my campground, after months of work, and it’s probably going to be a while before I manage to build a big shrine to lure longtime Animal Crossing character Red to my place.

Pocket Camp still isn’t a full-fledged Animal Crossing game. It’s a streamlined take on the franchise, built for quick bouts of play on a phone. But with each passing day, it becomes closer to that ideal. With these kinds of daily games, I often find myself playing more out of habit than enjoyment; it’s a thing I do, rather than a thing I love. That hasn’t been the case with Pocket Camp. Instead, I look forward to checking it out each day. As I write this, there’s a new fortune cookie shop coming to the game, where eating a cookie can somehow unlock items like a rocket ship or a pop star stage. I’m not even sure where I’ll put a rocket ship — but I’m going to keep playing to find out.