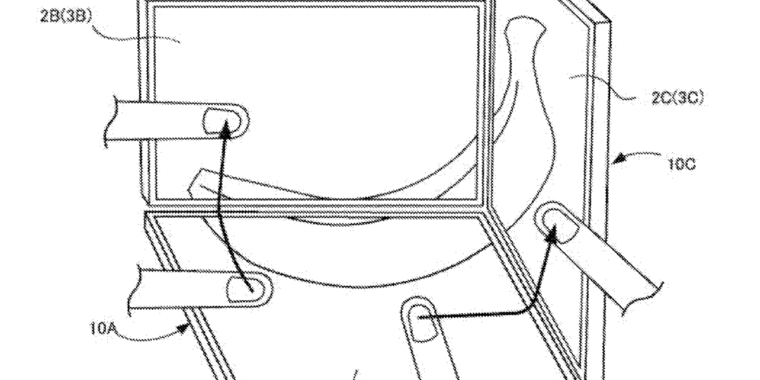 Anybody familiar with Nintendo’s hardware history knows better than to expect the company to rest on its laurels. Sure enough, as the company’s Switch continues racking up sales, a hint at its next portable system has already arisen in the form of a patent that is too bonkers to ignore.

Patents, after all, can be filed without a company ever intending to make the product, and Nintendo has a history of these—including misleading patents that gave us an incorrect impression of how the Switch might eventually turn out. Take this week’s newly published patent, first found by Digital Trends, with a few grains of salt—but we’ll forgive you if you start believing that this tracked, multi-touch, multi-screen console might ever exist.

The above gallery reveals how this “game system” would stand out thanks to its “plurality of display units in combination with a high degree of freedom.” The April 2017 patent describes a few situations in which touchscreen systems—which look a lot like a Switch with no attached Joy-Cons, or perhaps average smartphones or tablets—calibrate with each other to combine their displays as a single, unified game screen. We see a few multi-screen orientations, including screen pairs that touch, screen pairs that don’t touch, and larger groups of three or four screens with similarly unified displays.

Two of the patent’s pieces of art show an even crazier concept: real-time recognition of any panels’ Z-axis orientation. One example shows a bowling ball rolling down one screen, towards another screen’s bowling pins, thanks to the angle at which the first panel is held. Another example shows an image unfolding correctly across three panels held at varying angles.

The patent’s language makes clear that Nintendo assigns no limit of screens and hardware to this multi-screen concept. That’s because each system, according to Nintendo, would include specific processing instructions and beacon hardware to daisy chain along with compatible siblings.

Nintendo hints at multiple options for pairing separate displays. One would have players line up any two panels and swipe their screens in a single, smooth line, which would then define the paired systems’ specific orientation. However, the patent doesn’t explain whether or how these systems might lock together either magnetically or with a Joy-Con-like slot—and swiping across two screens that way might disturb their physical orientation. Thus, the patent’s other description of a real-time system that wirelessly transmits coordinates and calculates vectors seems like a more likely solution, should this concept ever exist as real hardware. (Plus, the latter implementation seems necessary for the sake of systems whose panels aren’t touching, as shown in the gallery.)

The patent accounts for the times that systems aren’t touching in various ways. In some cases, invisible geometry will be drawn in the precisely measured space between two systems (like in the art above that shows an Arkanoid-style game adjusting based on how far two systems are spread from each other). In other cases, separate systems will stay frozen in default orientations in each player’s hand, and these must be combined in a certain pattern to solve a puzzle.

Nintendo’s art primarily shows fingers being used to control these games, but the patent’s language includes explicit mention of a possible camera-and-microphone addition for input, along with “an external operation apparatus.”

Hidden in the Switch?

The patent’s language otherwise explains exactly how games will be processed, which files will be stored and booted on each local device, and what kind of data, including save files, is transferred between systems during a game’s operation. That shouldn’t be considered a hint at this device ever reaching the market, but it also doesn’t dispel the possibility that the existing Nintendo Switch could replicate this patent’s features. The console’s Broadcom wireless comms chip includes Bluetooth 4.1 support, which might suffice in terms of data throughput and multi-device compatibility.

Still, we believe its mention of beacon-like sensing will require some sort of add-on device, if not an entirely new system. (It’s also hard to imagine Nintendo waiting this long to announce patented features hiding in released hardware).

Considering that Nintendo Labo will ship next week with some interesting multi-Switch ideas—including a “Toy-Con Garage” concept (see above) that has two Switches and two Joy-Cons talk to each other for a multi-screen mini-game—it’s clear that Nintendo is still charmed by connected screens in the same room. But everything from GBA Link Cables to Nintendo DSes to Wii Us only toyed with the idea of separate screens being combined in basic ideas. This patent clearly goes one bigger with something we’ll affectionately dub the Nintendo MS (Many Screens) for however long this patent hovers as a compelling possibility, as opposed to a reality or ruled-out vaporware.