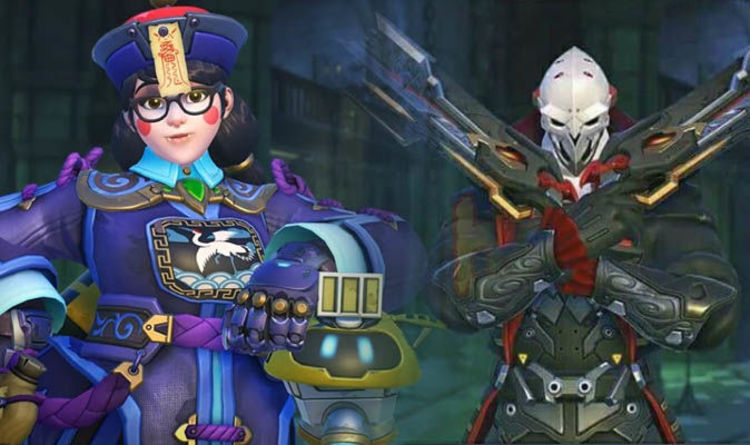 UPDATE ONE: More details have emerged about the Overwatch Halloween Terror 2017 event after new skins for Mei, Symmetra, Reaper and Zenyatta leaked.

The Overwatch Halloween 2017 skins allegedly leaked on Facebook yesterday, with the new cosmetics pictured in a sponsored advertisement.

The Overwatch skins have not been confirmed by Blizzard, but pictures of them went viral after they were quickly captured and posted on the game’s Reddit page.

VG247 reported that the Overwatch sponsored adverts revealed the 50 new items will be available during the Halloween Terror 2017 event.

This means, as expected, we should expect to see additional items from last year’s event make a return.

Blizzard did the same thing with the Overwatch Summer Games 2017, bringing back old skins but having them listed at a reduced price.

ORIGINAL: Overwatch players have been given their first glimpse of the Halloween Terror 2017 event skins for Mei, Symmetra, Reaper and Zenyatta just days before release.

The upcoming Overwatch Halloween Terror event will start on PS4, Xbox One and PC on October 10, and runs all the way through until November 2.

Details on what the event entails are thin on the ground at the moment, as it was only announced on Friday.

However, the Overwatch event is likely to feature the return of the Junkrat’s Revenge wave-based survival mode.

But just days before the Halloween festivities kick off on PS4, Xbox One and PC, fans have been given the first look at some of the new Overwatch skins.

Leaked skins have emerged on the Overwatch Reddit page, and it shows the Overwatch Halloween 2017 look for Mei, Symmetra, Zenyatta and Reaper.

Mei’s skin for the Overwatch Halloween 2017 event shows her with cute -but surely sharp = vampire fangs.

Overwatch fans have figured out this is a reference to Jiangshi, the Chinese “hopping” vampire which features in China’s folklore and legends.

World of Warcraft, another Blizzard game, has numerous references to Cthulhu and Mythos – the universe the monster inhabits.

Reaper meanwhile has an edgy, spooky Overwatch Halloween skin that has a skull helmet.

And Symmetra’s latest Overwatch skin has a dragon-woman theme to it.

Overwatch fans were left speculating whether Symmetra’s Halloween skin could be a crossover with Blizzard’s other megahit – Warcraft.

But other Overwatch players were quick to put that speculation to bed.

On the Reddit page, one fan wrote: “OW team resisted hard putting any real crossover stuff in the game to this day.

“It’s more likely an Ifrit, not Succubus or anything Warcraft inspired.”

The official teaser for the Overwatch Halloween Terror 2017 event, released on Friday, also showed a new skin for McCree.

So it looks like there will be five new Legendary skins coming to Overwatch.

If the upcoming event is anything like the Overwatch Summer Games 2017, Blizzard is expected to bring back all of last year’s skins at a cheaper price.

Based on the Summer Games event, Classic Halloween Terror skins could cost as little as 1,000 credits.

That’s compared to 3,000 credits for the brand new skins available for the likes of McCree and Reaper.

Blizzard is yet to announce pricing and event details, so stay tuned for more information.

Junkenstein’s Revenge, meanwhile, has been described as Overwatch’s first ever PvE brawl.

Last year’s Halloween Terror blog post saidL “Team up with three other players and face off against a host of eerie enemies, including Dr. Junkenstein himself, Junkenstein’s Monster, the Reaper, a mysterious witch, and host of shambling zomnics,”

“This terrifying tale follows Dr. Jamison Junkenstein, an inventor and scientist who was once employed by the Lord of Adlersbrunn.

“Junkenstein’s dream was to create artificial life, but the Lord of Adlersbrunn mocked the scientist and his creations, calling him a fool and dismissing him from service. Slighted, Junkenstein vowed to prove the lord wrong, and when an unexpected visitor showed up and offered the key to perfecting his creation, Junkenstein’s Monster was born.

“Now Junkenstein plans his revenge against the Lord of Adlersbrunn, and only four heroes stand in the way.”

The leaked skins were revealed earlier today just a day after Blizzard launch a new patch to the Overwatch PTR.

They also made a number of changes to several characters, with Mercy – the most-picked Support character – getting nerved.

Twinfinite outlined the recent changes Blizzard has made to Overwatch.

They said: “Mercy can use Resurrect twice in a row by reviving a teammate, activating Valkyrie, and then bringing another ally back to life. Not to mention the fact that the ability’s cooldown is greatly reduced to 10 seconds throughout Valkyrie.

“On the PTR, her Resurrect no longer resets upon activating her ultimate ability. Similarly, the cooldown will now stay at 30 seconds.

“In exchange for the nerf, Valkyrie now doubles Resurrect’s range. That way, she doesn’t have to be in harm’s way when trying to bring back a teammate from the front lines.”