At CES in January, TechCrunch broke the news that media software maker Plex was planning to expand its service with the addition of new media content, starting with podcasts. Today, it’s making good on that promise by launching support for podcasts into beta, along with a whole new look and more customization options for its Plex mobile apps.

While Plex got its start as a software application for organizing people’s home media collections, it’s been expanding over the past couple of years to add new features in support of cord cutters who want to watch TV via their antenna, and record those shows. It also acquired the streaming news startup Watchup in order to add a dedicated news hub within its app.

Earlier this year, the company spoke of its ambitions to continue adding more types of content to its media center software, including audio and video podcasts, followed by digital, web-first and other longer-form creator content. (It had originally expected to add podcasts in Q1 2018, so this nearly-June launch is a bit of a delay.)

The larger goal, on Plex’s part, is to organize all your media content in one place – from live and recorded TV to your personal media collections of music, photos, and videos, and your news and information – including, now, your favorite podcasts.

The feature, live today in beta, is available on the Plex web platform, Roku, and iOS and Android, with other device support coming soon. 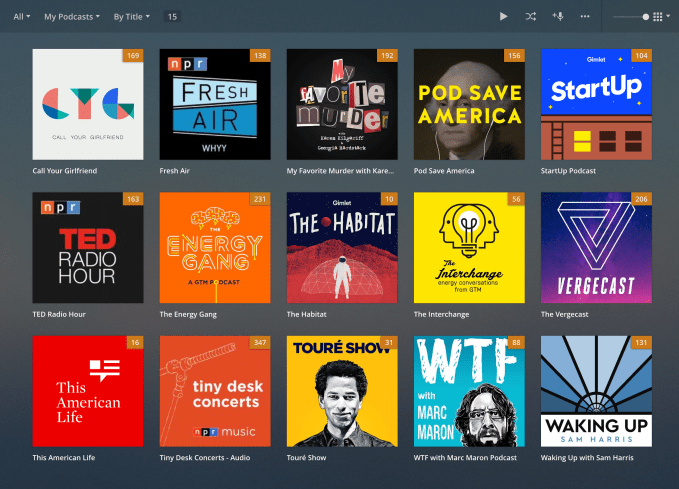 You can browse and search across Plex’s podcast library, filter podcasts by categories, or click into a title to see the details, episode lists, and related podcasts. To follow that podcast, you click the “Add to My Podcasts” button. This will add the podcast to your “On Deck” dashboard, as well.

If the podcast you like isn’t in the Plex catalog, you can add it by entering the feed URL, and Plex will treat it as if it is – it will retrieve all its metadata, related podcasts, and make it searchable. (That’s useful because Plex’s catalog isn’t as robust as others at launch.)

The feature also includes the standard media controls you’d expect, like forward and back and support for variable speed playback, as well as a “mark as played” option, all available through Plex’s upgraded media player. That option can help you transition to Plex’s podcast platform from another app, as you won’t have to lose your place, in terms of what you’ve listened to, and what you’ve not. And it lets you continually mark off any episodes you may have caught elsewhere, or just otherwise want to skip.

Your listening progress is also synced across Plex’s suite of apps.

The feature wasn’t perfect in brief testing, but it was in a pre-launch state, and today it’s only arriving in beta – so it’s too soon to speak to how well it performs as a publicly-facing product.

In a few weeks, Plex will roll out a handful of other features for podcasts, including smart downloading with granular controls for managing the episodes you want to keep on a per show basis (e.g. keep the last three); additional metadata for richer show pages and better discovery options; and podcasts import and export (OPML) so you can move your current subscriptions more easily into Plex.

Along with the launch of podcasts, Plex is updating its mobile apps, too, to offer better customization options.

Now, if you want to listen to your podcasts and news while you’re on the go, on mobile, you can configure the app to show that media on your home screen. Or, if you use the app more for casting your videos to your living room TV, you could bring those favorite shows to the front of the experience instead. And so on. 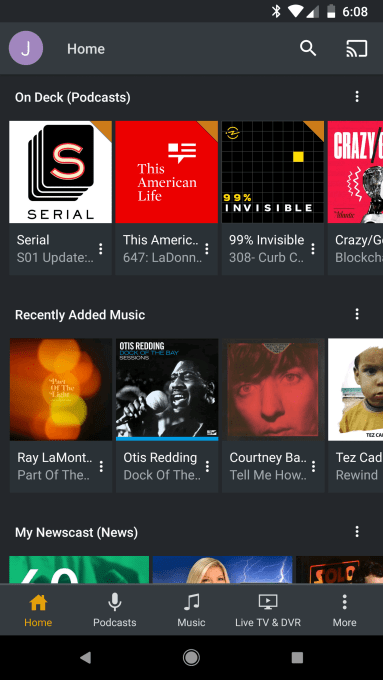 On this new, customizable home screen you can re-order you content, remove any of its sections (like “Recently Added” or “On Deck,”), or add new ones from elsewhere in the app, including across servers (like Plex Cloud or your local server such as your home PC.)

Plex has also added tabs at the bottom of the screen for switching between your media type (e.g. movies, TV, podcasts, etc.), which are fully customizable, too. You can even customize the default source for each media type.

The addition of podcasts to this more personalized media experience makes sense not only because of how popular podcasts have become, but also because many are tied to the shows you watch – they’re creator commentaries, roundtable discussions, fan chats, critic reviews, and more. It’s easy to imagine, then, moving from watching a show on the TV then heading out and launching the Plex app to listen to the podcast discussing the last episode.

That’s the vision Plex has, at least. However, even with these additions, Plex’s software overall still caters more to the DIY crowd – those who want set up their own antenna, rather than pay for an online TV service like YouTube TV or Sling. And it hasn’t yet solved the problem of media that’s all over the place – favorite shows and movies are strewn across services like Netflix, Hulu, HBO, and Amazon, and it’s hard to know where the things you want to watch reside. Those are still challenges Plex could attack in the future, by becoming a hub that jumps you into streaming catalogs, too.

It’s unclear how well Plex’s expansions have been working to attract new users and paying subscribers.

The company doesn’t break out the latter figure. and it still claims today the same 15 million registered users it had at the beginning of the year. Becoming a podcast player could help bump that number up, though, and introduce more people to Plex’s software, as a result.

Podcasts are in beta on web, mobile and Roku, and the mobile apps are rolling out starting today.