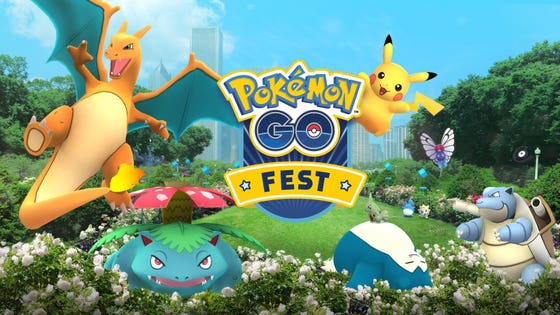 Niantic has announced the return of Pokémon GO Fest, a sequel to 2017’s disastrous live event in Chicago, one that they’re hoping will go more smoothly this time around with lessons learned from the original.

Pokémon GO Fest 2017 is once again in Chicago, this time in Lincoln Park on July 14th and 15th “with a 1.8-mile walking course that, among the tree-lined greenery, will include exclusive activities for Trainers of all ages.” It joins other Safari Zone events in Dortmund, Germany and Yokosuka, Japan that will also take place this year.

It’s hard to understate just how terribly the original Pokémon GO Fest went last year. It was supposed to be a grand celebration of the one year anniversary of the game, and the kick off of Legendary Pokémon raids. Instead, players who paid $20 each for wristbands to attend, and many who had secured flights and hotels to get there, were treated to hours-long lines, overstuffed crowds inside the park and ultimately, a non-functional game as with so many people trying to play at once, Pokémon GO itself was inaccessible throughout much of the day. Eventually, the special “spawn” zones were expanded to include much of the city to try and relieve some of the pressure, but by that point, it was already too late.

The end result was that GO Fest attendees not only had their $20 tickets refunded, but were given $100 in Pokecoins and a free Lugia for attending. But that still wasn’t enough for some who had spent far more than that on travel, and eventually a class action lawsuit doled out a sum to each attendee who wanted to claim it, splitting $1.5M among them.

Needless to say, Niantic will try to redeem itself with Pokémon GO Fest 2018.

It very well can’t go worse than last year, and while I would expect attendance to be a bit lower in year two compared to year one, enough people will likely attend to still cause server/cell issues if Niantic has not fixed their problems. Long lines are an event management issue, and hopefully that’s going to be resolved as well.

What hasn’t been made clear yet is what the perks are of attending the event. Given that it’s something that requires out of town travel for many, hopefully Niantic will get more specific with the details other than “exclusive activities” and saying people can catch “a variety of Pokémon.” Are there special spawns? Special raids? Special research quests? These are things it’s going to be pretty key to know before you start making plans to come out in July.

I will be moved out of Chicago by the time GO Fest rolls around again, but I may have to return for it as (fortunately, it turns out) I missed the original one due to a family vacation. A family vacation I almost cancelled to go, and boy, am I glad I didn’t.

Niantic has never had another event as bad as last year’s Pokémon GO Fest, despite having many other live events in the past year, so the hope is that this do-over will go off without a hitch. Or certainly with far fewer hitches. Hopefully we’ll know more details about the event soon, but until then, pencil it in on your calendars if you’re still playing and want whatever prizes the event ends up doling out.