Earlier this week I attended the exposition at the International Association of Chiefs of Police (IACP) conference in Philadelphia, where over 600 vendors displayed their wares for the thousands of potential law enforcement buyers in attendance. Walking around the floor looking at the technology being sold to law enforcement and talking to vendors and others, I got a whirlwind tour of the state of law enforcement technology at this moment in our technological revolution.

Many of the exhibitors offered the kinds of nuts-and-bolts equipment that you would expect to have seen at a police convention set in 1965: batons, badges, boots, handcuffs, etc. But there was also an enormous number of companies pushing products that a police chief could never have imagined in 1965.

To start with, there were a surprising number of entrants in the body camera market. Axon/Taser had a giant tent in the middle of the floor with a little theater, a hub of excitement where people stood in line to view a more or less substance-free video and “hologram” about policing with Axon bodycams. One retired police official not involved in the industry said to me ruefully that Axon, with its 70 percent share of the bodycam market, was becoming too powerful — “the Google of the industry” as he put it. Many of its competitors seemed to be seeking to break through with “advanced” functionality such as live GPS tracking of officers, 360° cameras (for mounting on top of a helmet, or even on the back of a police dog), the inclusion of outward-facing screens to remind subjects that the police are recording them, and the ability for police management at HQ to remotely activate a camera and monitor live streaming video from officers’ cameras. One vendor, Utility, was selling a bodycam that listens for gunshots and automatically triggers the camera upon hearing one. (The privacy implications of audio gunshot detectors is something I wrote about here.)

From a civil liberties point of view I don’t love some of these “innovations” in body camera technology. We do not support, for example, the live streaming of bodycam video; the purpose of body cameras is to serve as an independent record when something dramatic goes down. It is not to feed video to centralized surveillance centers.

Speaking of panoptic surveillance centers, there were numerous vendors selling “information solutions,” “analytics,” and “intelligence” software packages. The predictive policing company PredPol was there, but it seemed like a lot of big established electronics companies were all trying to get in the game (as they also were with body cameras). Exhibitors included prominent electronics manufacturers such as Motorola, Samsung, Panasonic, Microsoft, and NEC. This display from Motorola sums up the spirit of the event: 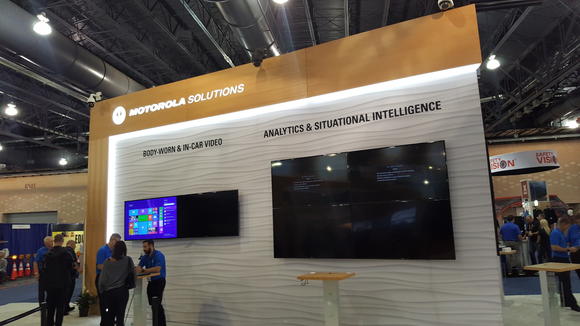 Hitachi, for example, was touting a “Visualization Suite” that promises “full situational awareness” and “Integration of disparate systems and sensors [that] provides connected intelligence.” The demo I was shown included the ability to integrate and display geospacial data, camera feeds, crime data, evidence management systems, gunshot detection, ALPR data, risk-assessment heat maps, and more, including social media information (though the salesman did bitterly complain that “Facebook won’t let us sell their information to law enforcement any more”).

A similar “Smart Cities” product was offered by a company, Ekin, which was selling a “Safe City Operating System” that promises in company handouts to “archive and analyze” all city safety systems data — everything from red light and speed cameras to surveillance video, ALPR, face recognition, and more. That, the company claims, allows for “Searching based on gender, age, and groups around the city” (“groups”? Gee I wonder what that means…) as well as “Searching for a specified person through all the cameras in the city,” and even “Detection of whether a person has ever been in a specific area.” It’s not clear how real such claims are yet but the power that they’re claiming to offer would be more than any free people should give to any government made of men not angels.

Hitachi was also selling video analytics software the company claimed could analyze “motion duration and dwelling times for statistical purposes” and featured a “queue detector” (sounding an alarm when lines build), people and traffic counters, and parking, traffic, object, and intrusion detectors, as well as face recognition and ALPR. For what it’s worth, it also offered a privacy functionality option “that pixelates humans and vehicles.”

Some of the other things I saw: 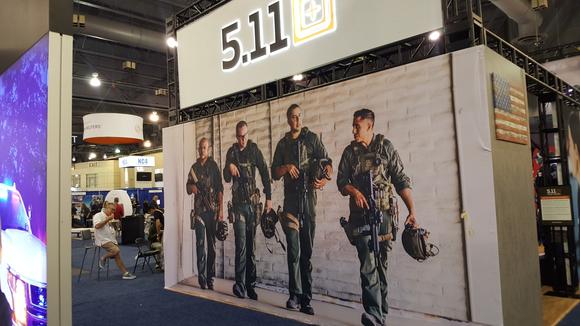 There were many other notable things at the convention: a speed camera manufacturer bragging about how its product can easily be moved for the purpose of “avoiding social app detection”  (read: Waze). Harris Corporation, maker of the infamous Stingray cellphone tracking device, was also there, though no mention of that product was evident (they seemed to be selling police radios). There were also of course a few drone manufacturers, though not as many as I expected. Drones continue to creep into use as a real but not-yet-widespread or standard part of policing.

In the end, of course, much what I was seeing at the IACP was the sales side of police technology: this expo reflected what American companies think and hope police will buy, not necessarily what they actually are buying. There were no doubt many vendors who aren’t having much success, and no doubt many police officials who are just as skeptical as I am about the utility, wisdom, and/or practicality of some of these products. But just as certainly, there will continue to be many police departments that are acquiring technology that has significant surveillance implications, often without telling, let alone asking, their communities. The event was an amazing exhibition of the churning technological invention that marks our era — and of our need to be vigilant in making sure that our government is constrained by more than just what is technologically possible.