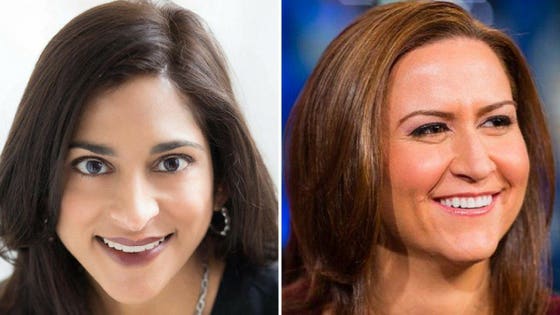 Being a professional angel investor takes a lot of work. Having meetings and responding to emails takes a lot of time. “Grabbing individual coffees with entrepreneurs is just not scalable,” said Sapna Shah, at Red Giraffe, her angel investment vehicle.

Two women — Shah and Alicia Syrett at Pantegrion, her angel investment vehicle —have developed an efficient way to meet amazing entrepreneurs, share knowledge, increase thought leadership for themselves, expand the ecosystem for women entrepreneurs, and build their portfolios.

Syrett spent most of her career in financing at large hedge funds and private equity funds. She caught the entrepreneurial bug when she became the first employee of a PE fund which scaled to 60 employees in its first 6 months, launching in New York City, London, Mumbai and Hong Kong. When the company reached a steady state, Syrett realized she enjoyed starting and building companies so she left to do just that. “Angel investing allowed me to do what I enjoyed doing without drinking from the fire-hose lifestyle of entrepreneurs,” said Syrett.

Shah was an investment banker who went back to business school then into retail as a strategist and business developer for Ann Taylor, Gap and Linen & Things. As an intrapreneur, she built several new businesses inside these big businesses. When Shah left, she launched an equity research firm specializing in retail as well as an ecommerce firm that curated contemporary urban men’s wear. After shutting down the ecommerce company and selling her stake in the research company to her cofounder, she was asked by a friend to connect him to angel investors. She reviewed his plan and wanted to make an investment.

Having deal flow — a large and varied number of deals to choose from — is key to finding good investments. Both did the typical things to create a constant stream of quality deals: networking with entrepreneurs and angels, joining angel groups, being active in their alma maters entrepreneurial networks — both graduated Columbia and Wharton — judging demo days, participating on panels. Syrett is also contributor to CNBC, MSNC and Inc.

“I combined what I was learning [through books, blogs and networking] with real-life, hands-on experience by joining deal teams and doing due diligence,” said Syrett.

Both angels found a way to meet and build relationships with entrepreneurs without clogging their calendars. They each developed an event series to help women entrepreneurs get information, meet a mentor or find an investor. Each event builds their deal flow pipeline while helping entrepreneurs.

During Syrett’s event series, Point 25, promising women-led companies are offered the opportunity to meet with C-level Advisors and investors who may join advisory boards or become mentors. ‘Point 25’ refers to the equity incentive of 0.25% that an advisor often receives when joining a startup’s advisory board.