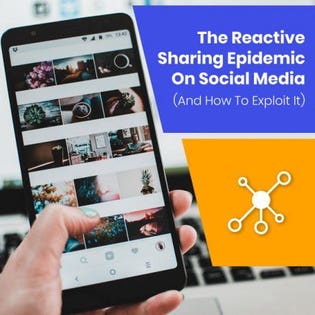 Think of all the articles you’ve shared on Facebook (or your social media platform of choice) in the past few months. Did you read each of those articles in full, well before you shared them? Or did you share at least some of them without looking past the headline?

Chances are, you’re in the latter group, no matter how much of a thorough reader you think you are. And I say that not because I’m speculating, but because statistically speaking, it’s true. A study from 2016 found that 59 percent of links shared on social media were shared by users without ever clicking on them; in other words, they only read the headline, and not the content of the article.

This “reactive sharing” epidemic may seem like a bad thing, and there are some clear repercussions for a society that doesn’t involve itself in fact-checking or thorough reading, but as a marketer, there’s a lot you can learn from this trend—including some clever ways to exploit it.

First, I want to delve into some of the psychological and technological motivations for this trend, so we can better understand it and work it in our favor.

How to Exploit It

So what can you do, as a content marketer, to take advantage of this trend?

1. Focus your attention on headlines. The biggest takeaway here is that your headline is often more important than the rest of your article; even if you spend several hours or several hundred dollars developing the core content of your piece, a user may quickly reject it or share it, based on the headline alone. Accordingly, you should spend at least as much time polishing the headline as you do the rest of your content.

2. Tell a story. It’s also useful if your headline can tell a complete (or semi-complete) story on its own. For example, IFLScience once published an article titled, “Marijuana Contains ‘Alien DNA’ From Outside of Our Solar System, NASA Confirms.” Despite getting more than 168,000 shares and attracting more than its fair share of comments, the headline was completely untrue, serving only as a social experiment to see how many people would engage in conversation about a nonexistent topic (based on a headline alone). Teasing your readers, by giving them only part of the story, is a common tactic for inviting clicks, but if you’re aiming to get more shares and links, it may be better to provide a more complete nugget of information.

3. Know your audience. Spend some time getting to know your readers. If you write headlines that cater to their pre-existing beliefs and assumptions, you’ll do a better job of getting them to share your material. For example, where do they lean politically? What are their most important values? What type of work do they do, and how much education do they have? These pieces of information can help you shape a headline that truly speaks to your audience, and encourages them to share.

4. Dig into controversy. I’ve written before about how controversy can help you find success in content marketing, and it’s especially helpful when taking advantage of the reactive sharing epidemic. Controversial titles tend to attract attention, no matter which side of the fence you’re on. They encourage proponents of the headline to share the article with others, and encourage opponents to post comments. So long as you avoid outright antagonism, controversy serves only to make your content more popular.

There isn’t much you can do to make social media users more likely to read the content of your article, rather than just your headline, but there are many steps you can take to improve your own performance, given the circumstances. Learn to exploit this key trend, and you’ll be far more likely to earn shares and links on your content.