Nintendo Labo has a lot of stuff crammed into its box. I initially thought I’d sit down with my son today and whip up a few cardboard creations, play the games, and then write this review. After making our first larger Toy-Con, as Nintendo has named these projects, I was quickly disabused of that notion. The majority of the Toy-Con take more then 90 minutes to complete, according to the game, and the piano can take upwards of two-and-half hours.

That being said, the basics of Labo can be picked up in a few minutes, and I have been able to build and mess around with the Motorbike and RC Car Toy-Cons. Given that, I’m not quite ready to make a final ruling on Labo, but there’s enough here to deliver something of an opinion on what exactly Nintendo has done here. 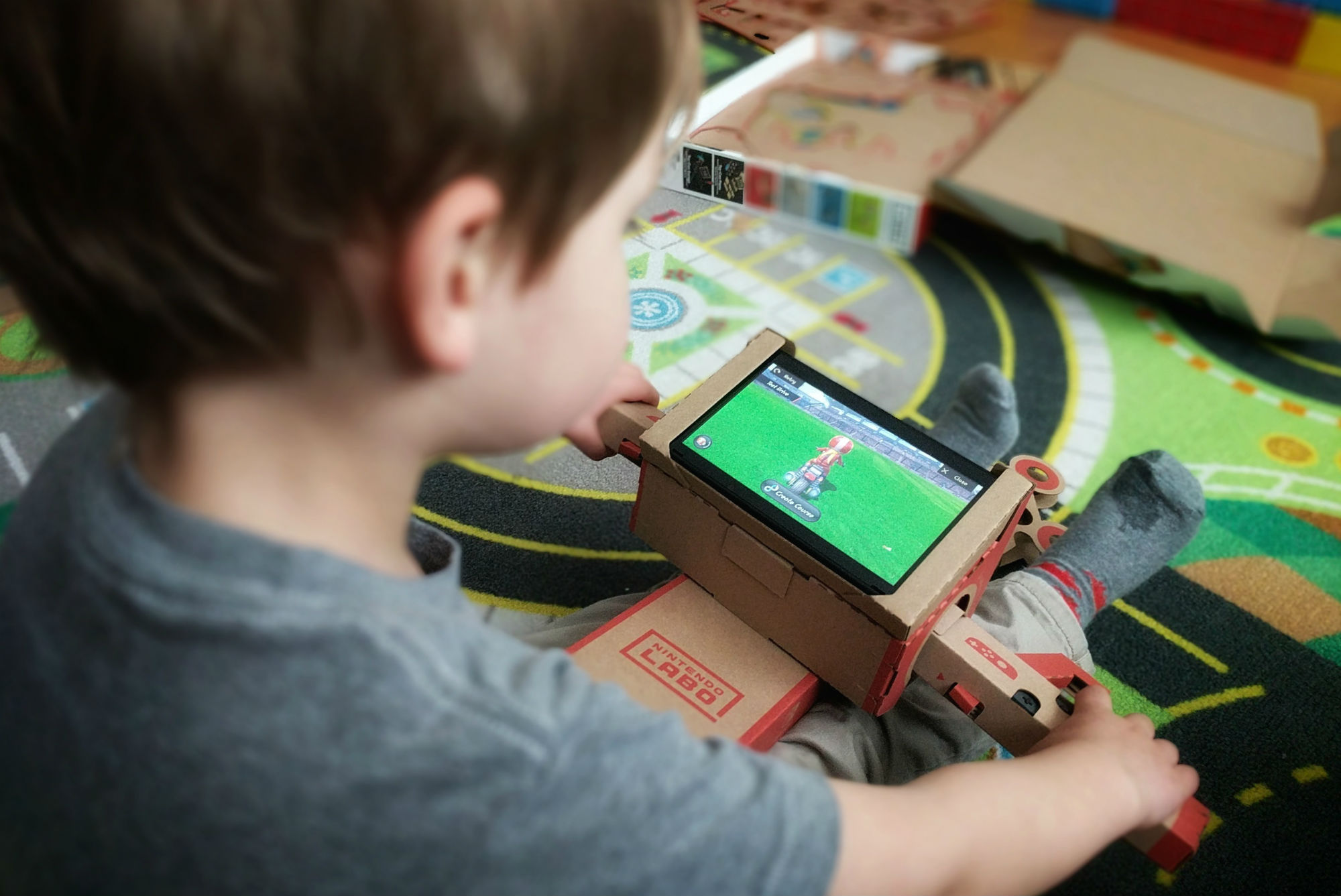 Labo is the most Nintendo thing Nintendo has done since, well, the Switch. It’s an idea that most likely only Nintendo would come up with, and most definitely only Nintendo would actually manufacture and release. Labo comes with the “game” (duh), a bunch of sheets of cardboard with toy-con parts punched into them, some rubber bands, and a few other doodads that help you make your creations. There are five of those creations: RC Car, Motorbike, House, Piano, and Fishing Rod. The basics of making these are pretty obvious: you pop out the cardboard, fold, insert the Joy-Con – and sometimes the Switch itself – and you’re off to the races (quite literally if you’ve built the Motorbike).

Labo is for children six and up, and it’s pretty obvious. My son is three-years-old so a lot of the folding and some of the gameplay was a bit beyond him. There’s not anything overly complicated in what I’ve built so far, but there’s definitely some precise folds that require a lighter touch. Still, even at three, my son was enticed by the folding he could do, and entranced by the fact that something we made could control the things on the screen. Watching him realize that the Motorbike handles we built actually controlled a motorbike on-screen was cool. Hell, I thought it was pretty damn cool and I’m a grown man. Having something you build vibrate like a motorcycle, steer like one, and even have a working accelerator, brake, horn and ignition is just… awesome.

The construction itself is pretty sturdy, but it’s still cardboard. The cardboard is thinner than I thought it would be, but also stronger than it looks. It’s definitely strong enough to last a while, even with kids, which was a repeated concern when Labo was announced. My son managed to bash on a piece when I looked way for two seconds (because that’s what kids do), and it stood up to his rather energetic attempts to “drive” the motorbike into the ground. It’s by no means invincible, though, If I wasn’t paying attention I accidentally could fold where I wasn’t supposed to. That might just be me being careless more than a statement of the strength of the cardboard.

What is clear is the amount of attention to detail and care Nintendo put into this product. Every aspect seems thought through to the nth degree, from what I’ve experienced so far. For instance, The design of the motorbike’s handlebars allows the bottom section to open up, which makes inserting the Joy-Con a piece of cake, even if you’ve got big fingers. It’s little things like this that make the construction aspect of Labo stand out, not to mention the fact that everything (so far) just works.

As a dad – and person who shops at IKEA – I’ve put together plenty of things that require parts going into other parts, and there is nothing more annoying than when something that is supposed to fit does not. This just doesn’t seem to happen with Labo. Every fold and tab fits like it should, and it’s really satisfying to get through a complicated folding series to have your Toy-Con turn out exactly how it should. 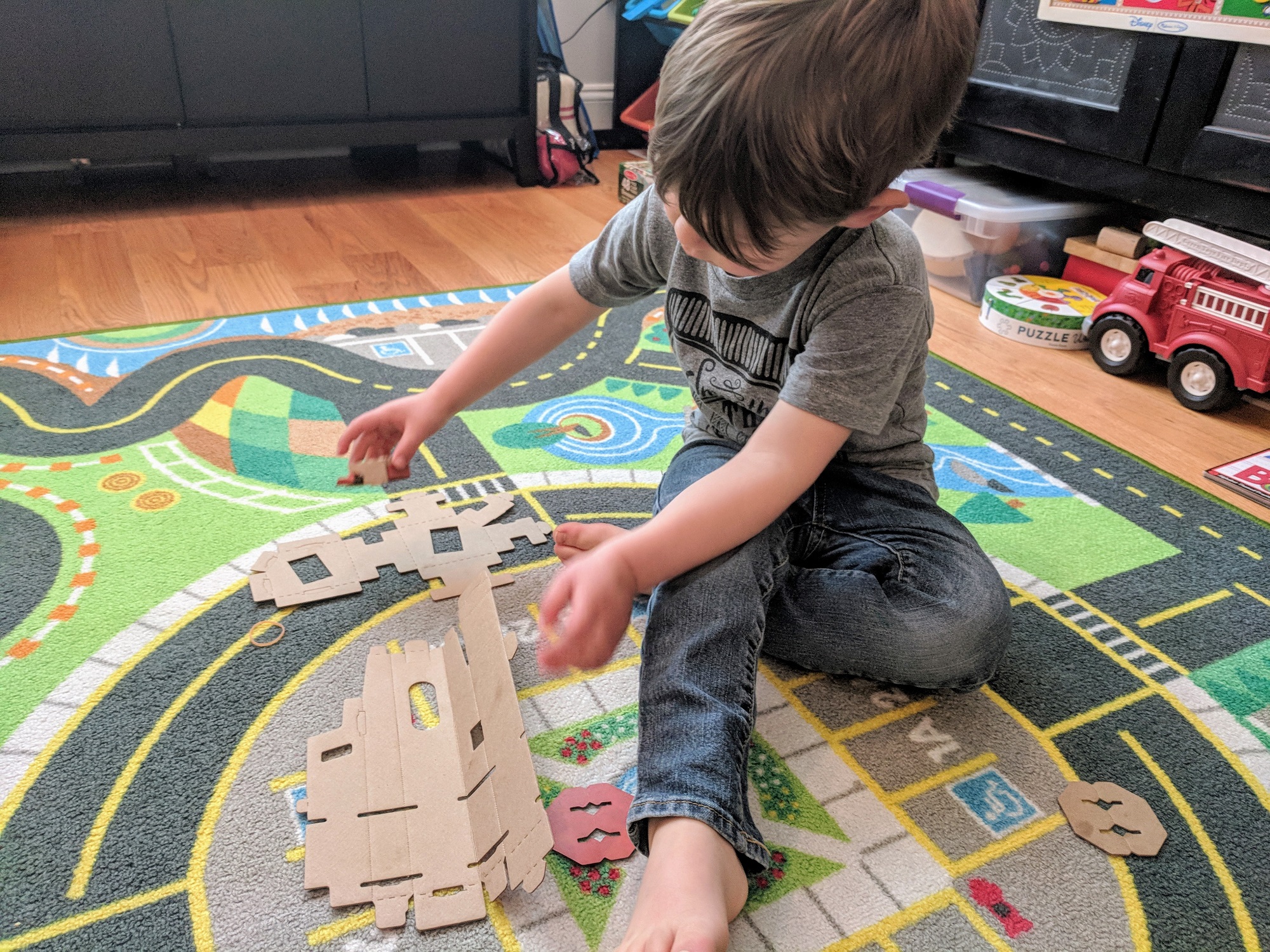 It’s also incredibly easy to follow the instructions. After you put the cartridge in there’s a brief tutorial that walks you through making a holder for your Joy-Con, and then you’re all set to go. You can jump into any project, build, and then play with your new invention. The instructions are presented in a video-style format, turning the Switch into a tablet with the directions on it, and I really hope this is the future of all instructions. I do wish that you could jump more easily to specific spots in the video, but you can, at least, fast forward to pick the pace up. You can rotate to get the right angle, rewind to see a motion just right, and there’s even optional background music that I found myself folding to the beat of. While you rarely need to us these features when building, I would have loved to have this when putting together the cupboards in my kitchen.

The software is broken up into three sections: build, play, discover. Build is basically your construction manuals, while Play is the games you use with your Toy-Con, and Discover is instructions and other details. The coolest part for kids about discover is that it’s not just basic instructions. Through three lively characters kids can get outside-the-box ideas for how to play with their new Toy-Con, construct add-on items that expand the initial build’s abilities, and even learn the basic mechanics and programming that let their new toys do what they do. It’s far more in-depth than I thought it would be, and really opens up the educational and imaginative aspects of the game.

And these things are way more imaginative then I thought they would be. Both the RC Car and the Motorbike have uses beyond what you’d think. For instance the RC Car can use the Joy-Con’s infrared camera to steer itself. You simply set up these little signs for the car and it will drive vibrate from one to the other. Again, a little detail that Nintendo didn’t need to put in there, but that plays wonderfully within the Switch’s plethora of random functions. 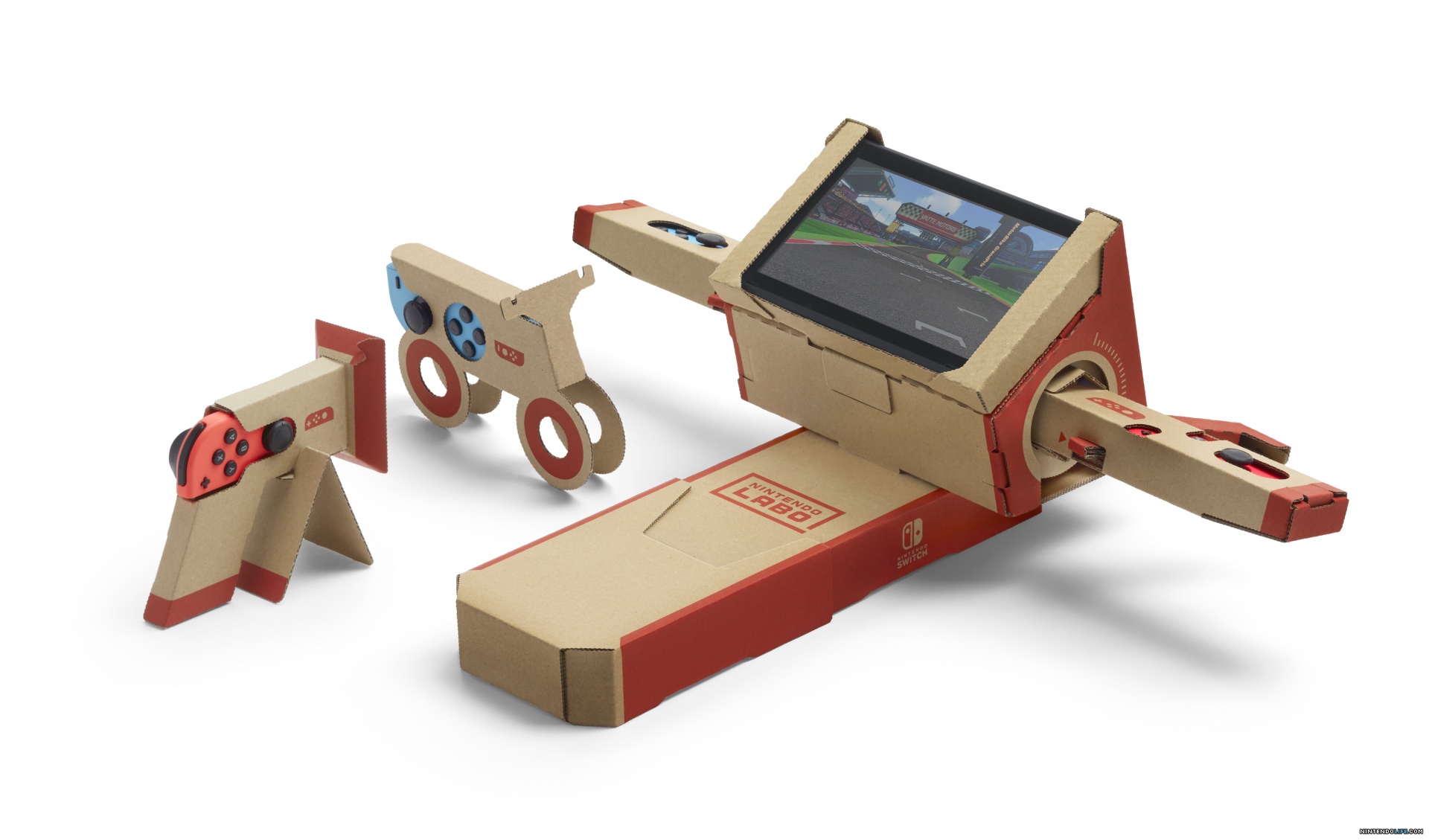 Another example of this is designing Motorbike race courses of your own. While the racing game attached to the Motorbike toy-con is just super basic Mario Kart it’s fun enough, and a cool way to show off the toy, but there’s also track creation. You do this in an incredibly inconvenient yet totally awesome way. Instead of building a course, piece by piece, you slide the Joy-Con into a totally unnecessary cardboard motorcycle that takes a few folds to make.

Then you literally drive it around. Turn left and your track goes left. Raise it up and you’ve got a hill. My son created a race track simply by running around making motorcycle sounds.  You can also design off-road courses… by aiming the infrared camera at things and having it map that to the landscape. Is it a terribly inconvenient way to make a course? Yes. Is it fun as hell? Also, yes.

It’s the expanded functionality and creativity like that that really has me looking forward to the rest of what Labo has to offer. Fishing sounds fun, but now I’m wondering what other cool things I’ll be able to do with the rod. The house looked like the most uninteresting Toy-Con when I started, but it’s got all these extra things that I’m dying to find out what they do. There’s a lot more to explore with Labo, and I wish I could take it a bit slower.

Building these toys back-to-back in a rush just doesn’t seem like what it was made for. It’s made for creativity, thinking on your own, and a million other things that you would have never have thought a video game console could do. My only worry is where I’m going to store all this cardboard, and if the games will continue to hold the interest of both myself and my son beyond the initial impact of how cool it is to make something like this.

[This review in progress is based on a retail version of the game purchased by the reviewer.]