Recovery from the Great Recession in the U.S. and the global credit crisis of the early 2010s sent housing prices soaring to new peaks in recent years in cities worldwide. But there’s dwindling evidence that demand will push luxury prices significantly higher in the near term, and many cities are already seeing plateaus and corrections, according to real estate analysts—especially in light of rising interest rates and a new batch of government regulations.

“It still makes sense to invest in real estate for diversification in the portfolio, but the market timing is less good than it was a few years ago,” said Thomas Veraguth, a Zurich-based real estate strategist at UBS Global Wealth Management’s Chief Investment Office 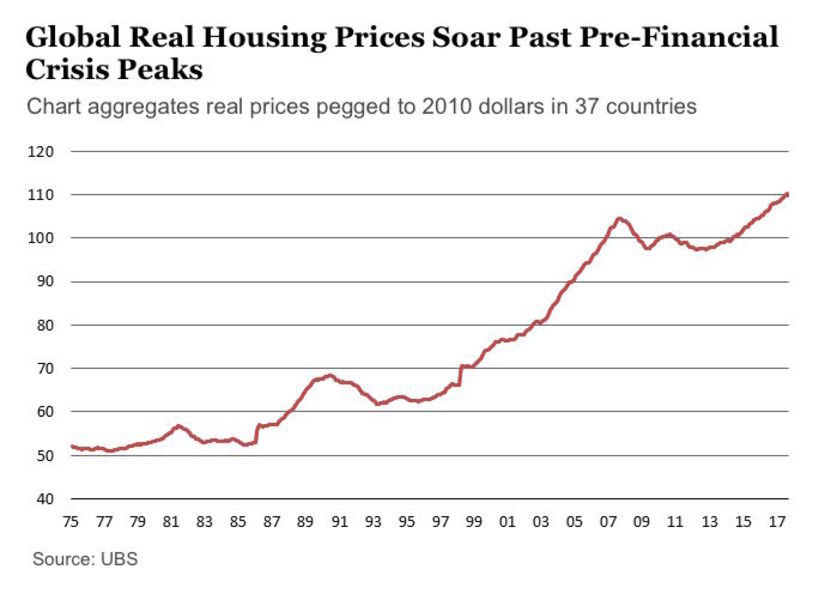 During a five-year stretch from the end of 2012 through 2017, prime housing prices in Sydney and Melbourne grew an average of nearly 55%, according to Knight Frank’s latest report on prime global cities. In North America, led by Toronto and Vancouver, luxury home prices catapulted 45% in that time. And Middle Eastern cities saw luxury homes appreciate more than 40%, according to the index, which tracks the top 5% of the market in 42 major cities.

But investors tempted by robust markets everywhere from Los Angeles to Guangzhou, China, may want to tread carefully as the explosive momentum of the past five years has tapered.

“A brighter economic scenario helped push luxury prices higher,” wrote Kate Everett-Allen, head of Knight Frank’s residential international research, in the report. “However, with fiscal stimulus being withdrawn and interest rates set to rise across several key markets, we expect the index’s rate of growth to moderate in 2018.”

Prices in China, Australia and Canada have gotten so high so quickly that their respective’ governments have passed measures to rein them in.

And analysts still consider London’s real estate market overvalued, even as prime prices have receded 8% since their 2015 peak.

UBS Global Wealth Management has used a more ominous phrase for the prices in London, Sydney and Toronto: Real estate bubble. Housing is overvalued and in bubble territory in those cities, along with Stockholm, Munich, Hong Kong, San Francisco and Los Angeles, according to UBS.

While UBS doesn’t predict when a correction will set in, it could come from one or many economic or governmental changes. “A change in macroeconomic momentum, a shift in investor sentiment or a major supply increase could trigger a decline in house prices,” the report said.

Real estate isn’t the only overvalued asset out there.

U.S. stocks saw one of the strongest, calmest periods of growth during 2017, bolstered by the prospect of business tax cuts and a strengthening economy. But a month into 2018, equities showed how a sudden change in sentiment can send prices into a tailspin.

In the first eight days February, the Dow Jones Industrial Average tumbled more than 2,300 points, or 9%, and resurged over a couple weeks only to tumble 680 points in the last two days of the month. U.S. stocks have remained in flux ever since for reasons ranging from poor performance in the industrial sector to tariffs on China and a general undercurrent of anxiety over rising interest rates.

It would be particularly foolhardy to take money out of the volatile equities market to buy luxury property. “At this stage it’s very difficult to say we should now leave stocks and buy real estate because real estate has already rebounded, the market timing is worse than it was one or two years ago,” Mr. Veraguth said.

While consumers (or homeowners) can sell high to reap the benefits of fast-paced, uninterrupted price growth, moderate growth with some fluctuations is more normal—whether that’s real estate or equities.

According to Tim McGrath, managing partner and financial adviser at Riverpoint Wealth Management in Chicago, “2018 is a much more normal market environment. It’s healthier to have volatility because you know when you have a year like 2017, eventually there’s going to be a downturn.”

Mr. McGrath doesn’t advise short-term investment in residential homes regardless of market values because the carrying costs often outweigh the income made when selling or if renting. He said he considers anything less than 10 years short-term.

“If you’re playing the odds you better be holding your real estate property for 10 years,” he said.

And for U.S. taxpayers, at least, the new tax law passed in December largely benefits the commercial real estate sector, for example, with lower tax rates on passthrough businesses, Mr. McGrath said. He pointed to real estate investment trusts, or REITs, as an alternative to investing in the property market but in a diversified way. REITs are companies that finance or own a portfolio of income-producing properties.

“I’ve got a number of clients that are stuck with these huge places and they’re never going to get sold,” Mr. McGrath said, at least not for the asking prices they wanted. “When you see a run up in the market, there are less opportunities for value.”