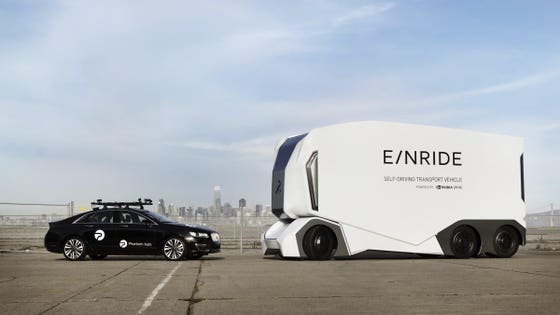 Consumer surveys point to lingering public concerns about the safety of self-driving cars even as the technology launches this year with Waymo’s robot-taxi service in Phoenix. Silicon Valley startup Phantom Auto thinks it can lessen that anxiety with a backup driver who can take the wheel remotely when a robot chauffeur needs help.

“We’re not trying to be an AV player. We want to be a safety solution,” Shai Magzimof, Phantom’s 27-year-old CEO, founder and inventor of its technology, told Forbes.

Phantom Auto’s remote control “teleoperation” system is a backstop for autonomous vehicles with so-called Level 4 capability, i.e., the ability to drive without human control under select circumstances when road conditions suddenly change because of construction, accidents or other complexities that could stop the vehicle in its tracks. When that happens, a remote technician seated at a multiscreen Phantom console, with a steering wheel, brake and accelerator pedals, assesses the situation via the car’s cameras over a cellular network connection and drives it out of the jam. Phantom began showing off its ability to do this in January at CES 2018, driving a Lincoln MKZ sedan around Las Vegas by technician 500 miles away in Mountain View, California.

A $5 million seed round in 2017 got Phantom up and running, and it’s begun a Series A to expand and hire developers. (Neither Magzimof nor cofounder and chief strategy officer Elliot Katz would say how much they’re targeting.) Phantom has also begun lining up partnerships with transportation and automotive cybersecurity firms.

The recent crash in Arizona in which a self-driving Uber test vehicle struck and killed a pedestrian, as well as collisions involving Tesla’s Autopilot feature, have cast a negative light on automated driving tech, suggesting a need for additional safety layers. Yet Phantom Auto still must prove to big players in the field that its solution is the right one. That’s because companies including Alphabet’s Waymo are skeptical teleoperation can be relied on due to the speed of current mobile networks and latency, the delay in sending and receiving data. Next-generation 5G service could change that but won’t be widespread for years.

Phantom’s tech “works today, with the network. If we had to wait for 5G there’s no solution here,” Magzimof said.

The company formed a research partnership with France’s Transdev, a large provider of mobility and transit services, to evaluate its system on autonomous vehicles its testing in multiple global markets. And to ensure the cybersecurity of its system and the vehicles that use it, Phantom also announced partnerships on Tuesday with Karamba Security and Argus Cyber Security.

It’s also lined up Sweden’s Einride as a customer to provide remote operation services for its all-electric, autonomous T-pod truck, which, notably, has no cab for a human driver. Futuristic T-pods are to begin delivering loads late this year for Germany’s Lidl supermarket chain and logistics company DB Schenker, Einride said in a statement. NEVS, a China-backed startup in Sweden that acquired the assets of Saab Automobile, also will use Phantom Auto tech in self-driving, electric vehicles it’s developing, the company said in a statement.

Phantom Auto is already generating some revenue, though Katz declined to provide any details.

Notably, companies including Nissan and San Francisco-based startup Zoox have said they too plan to incorporate teleoperations into their autonomous vehicles.

Maarten Sierhuis, a former NASA scientist who worked on deep-space probes and now runs Nissan’s Silicon Valley-based R&D unit, has advocated teleoperations as a necessary backup for self-driving tech for years, if not forever, because there are so many unpredictable things that can happen on the road.

Phantom’s approach differs from that of Nissan and Zoox, which appear to be working on “path planning,” Katz said.

“With path planning, a remote operator draws a route for the vehicle to follow,” he said. “We’re focused on ‘telepresence’—where the remote operator is contacted by the vehicle for assistance and, using its cameras, can see exactly what a person might see and then can drive through that situation, just as you or I might.”

The remote driving system is meant to be used only in cases where an AV’s artificial intelligence is flummoxed, and only briefly. And while not as fast and sexy as the remote-controlled Lexus that raced through Seoul in Marvel’s Black Panther, operated by the hero’s brainy sister, a drive around Mountain View in Phantom’s Lincoln MKZ showed that the system works, at least when it’s close to home.

Riding in the car is similar to the experience of being in an autonomous vehicle, though this unit is exclusively for remote-control excursions. It lacks the elaborate lidar and radar rigs used on AVs, and instead just has a roof rack of cameras to ensure visibility around the car and a large cellular network antenna. There’s a center-mounted screen on the dash to watch the remote driver go through his paces.

On a recent test drive, the technician at company headquarters guided the car through a couple tricky situations, including pulling out of a gas station and crossing multiple lanes of heavy midday traffic to make a left turn. The remote driver also reacted quickly and safely after that turn when the vehicle ahead had to make a sudden stop because another driver unexpectedly crossed its path.

“The biggest barrier to deployment of AVs right now is public acceptance,” Katz said. “For a century we’ve only thought that humans drive cars. Now we’re doing a complete 180, but most people aren’t ready to completely accept the fact that their lives are in the hands of a machine.”