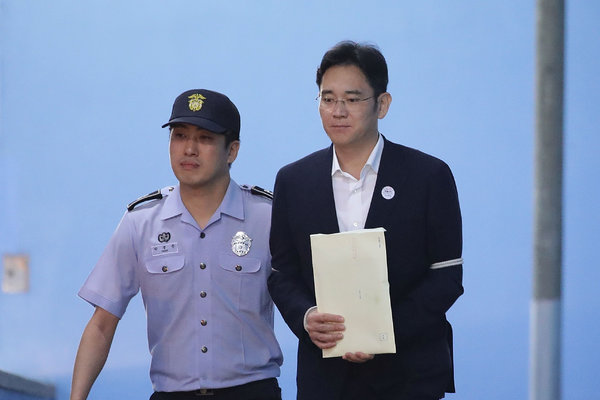 SEOUL, South Korea — More than two decades ago, South Korean prosecutors indicted the chairman of the powerful Samsung conglomerate on charges of bribing the president. He was let off with a suspended sentence and then a presidential pardon.

About a decade later, he was indicted again, on tax evasion and embezzlement charges. And again he escaped prison time.

The message was clear: Samsung was essentially untouchable, and the family that ran the company wielded the true power in South Korea.

On Friday, the country’s courts sent a different message.

Lee Jae-yong, the third-generation heir to the Samsung empire, was sentenced to five years in prison over a bribery scandal that has already contributed to the downfall of the country’s former president and shaken the country’s political and economic foundations.

It was the most remarkable sentence yet for a South Korean business titan, and a sign that the country is no longer willing to offer its business leaders political impunity in exchange for untrammeled economic growth.

Now South Korea and Samsung — the country’s biggest business empire and a global force in the technology industry — are at a turning point. Friday’s verdict could embolden efforts to weaken the hold that major family-run business groups have maintained over one of the world’s most dynamic economies.

“Until now, Samsung had always been considered above the law in South Korea,” said You Jong-il, an economist at the KDI School of Public Policy and Management. “This marks a big stride in establishing judicial justice in the country because it has kept failing before Samsung.”

For Samsung, a vast conglomerate, the verdict offers a test of whether the company can wean itself from the family that founded it and has long used it to amass wealth and power. Mr. Lee and other family members could still wield power behind the scenes, say people who study South Korea’s biggest companies, the way some of the country’s other business empires have been run from jail cells.

“He still has controlling power, even though he’s in jail,” said Chang Sea-jin, a professor at the National University of Singapore, speaking of Mr. Lee. “He can fire any chief executive, and the professional managers should have to keep reporting to him.”

Mr. Lee and four other Samsung executives were convicted on Friday of paying $7.8 million in bribes and other inducements to ensure that the country’s disgraced former president, Park Geun-hye, supported a complicated corporate deal. That deal strengthened Mr. Lee’s grip on Samsung Electronics, the famous maker of smartphones and televisions and the conglomerate’s crown jewel.

Prosecutors said the bribes were paid to people and groups linked to a secret confidant of the president and included horses for the confidant’s daughter, an equestrian. Prosecutors have identified Ms. Park as one of the bribetakers. The impeached former president, who faces her own trial on related charges, has denied wrongdoing.

The verdict could still be reversed on appeal, which Mr. Lee’s lawyers have said they will pursue. Their hope is not senseless: Mr. Lee’s father, Lee Kun-hee, twice received presidential pardons for wrongdoing. But the current president, Moon Jae-in, and his political party have pledged to crack down on shady practices at South Korea’s family-run business empires, which are known as chaebols.

Like many other chaebols, Samsung was an early beneficiary of a deal struck between South Korea’s autocratic rulers and business leaders after the Korean War to work together to make the country a fast-growing, export-driven economic powerhouse. As the relationship deepened, Samsung’s political connections grew.

In 2005, conversations recorded between a senior Samsung executive and a newspaper magnate, both close to the Lee family, were leaked to local news media. In those conversations, which took place eight years earlier, they discussed bribes paid to top politicians and senior prosecutors. Samsung apologized, but the recordings were not used as evidence because they had been illegally recorded.

Mr. Lee’s father — Lee Kun-hee, the son of Samsung’s founder — was twice pardoned by presidents after being convicted of bribery and other charges. But he won a measure of respect from South Koreans because he helped make Samsung Electronics into a high-quality brand.

The elder Mr. Lee is in a coma, leaving Lee Jae-yong as the de facto leader of Samsung and its valuable electronics unit. While Samsung has at times cast the younger Mr. Lee as a strategic thinker who hammers out deals with big foreign partners like Apple and Google, he testified in court this month that he had little knowledge of the details of running the business.

“At least people recognized his grandfather and father for making Samsung what it is today,” said Chung Sun-sup, editor of chaebul.com, a website that specializes in monitoring chaebols. “But people cast a cold eye on Lee Jae-yong because he has little to show for his attempt to inherit Samsung except that he shares a Lee blood line.”

Being in prison does not necessarily mean that Mr. Lee will give up control, however. He has two sisters, but neither has been heavily involved in the electronics business and they generally have not been considered rivals to Mr. Lee.

Other big South Korean family businesses have been run from behind bars. The chairman of SK Group, another family-run South Korean business empire, was convicted in 2013 for misappropriating company funds. A South Korean lawmaker, citing official data, said the next year that the chairman, Chey Tae-won, had nearly 1,800 visitors during more than 500 days in jail, far exceeding official guidelines. SK officials and lawyers opened an office near his prison, local news media said.

Still, if Samsung operates independently of the Lee family, it may run fine on its own thanks to its deep ranks of professional managers. Samsung Electronics has turned in strong results in recent months and has bounced back from an embarrassing spate of fires involving its Galaxy Note 7 smartphones. In the second quarter the company reported record earnings as it overtook Intel to become the world’s biggest chip maker by sales.

Perhaps the most daunting challenge to Samsung is one that the company has not been able to solve even with Mr. Lee free and in charge. While the company dominates hardware, from memory and chips to the finished smartphone and television, it has long struggled in the realm of software and services.

Another challenge could arise with the death of the elder Mr. Lee, which could set off the type of infighting that split up other chaebol families and empires in recent years, said Park Sang-in, a professor of public administration at Seoul National University and a chaebol critic.

“Cronies inside Samsung will start taking sides, and this is a risky situation you can’t control from a jail cell,” he said.

For many in South Korea, the question is whether the authorities will keep up the pressure on the country’s big business groups. Some groups critical of the chaebol say Friday’s Samsung verdict was not as severe as it could have been, and that the five-year sentence was the weakest legal penalty allowed for the crimes Mr. Lee committed.

An earlier version of a picture caption with this article, using information from Reuters, provided an incorrect photographer credit. The picture of Lee Jae-yong was a pool photo by Chung Sung-Jun; it was not taken by Lee Jae-yong.