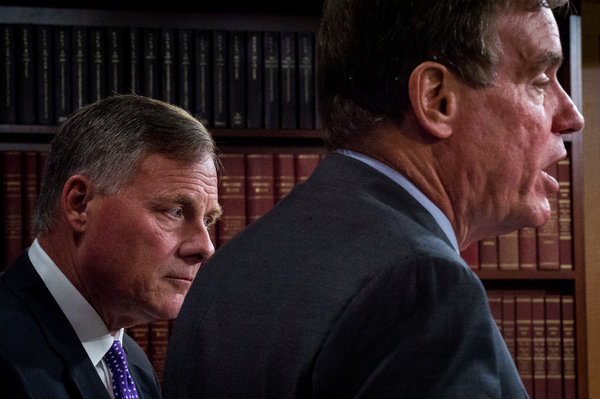 WASHINGTON — The leaders of the Senate Intelligence Committee delivered a stark warning on Wednesday to political candidates: Expect Russian operatives to remain active and determined to again try to sow chaos in elections next month and next year.

At a rare news conference, Senators Richard M. Burr, Republican of North Carolina and the committee’s chairman, and Mark Warner, Democrat of Virginia and its vice chairman, broadly endorsed the conclusions of American spy agencies that said President Vladimir V. Putin of Russia directed a campaign of hacking and propaganda to disrupt the 2016 presidential election.

“The Russian intelligence service is determined — clever — and I recommend that every campaign and every election official take this very seriously,” Mr. Burr said.

The podcast that makes sense of the most delirious stretch of the 2016 campaign.

“You can’t walk away from this and believe that Russia’s not currently active,” he added.

American intelligence agencies have concluded that Mr. Putin initially wanted to hurt Hillary Clinton’s candidacy, but later tried to explicitly help Donald J. Trump’s insurgent campaign. The senators said they have reached no conclusion on whether anyone around Mr. Trump was part of that effort.

“The issue of collusion is still open,” Mr. Burr said.

The news conference was the most extensive since the committee began its investigation of Russian meddling in the 2016 election early this year and the first time the senators have detailed so fully the trajectory of their secretive investigation and their sense of the stakes. Both men come from swing states where the presidential campaign was fought aggressively.

That appeared to have made an impression.

“There needs to be a more aggressive whole-of-government approach in terms of protecting our electoral system,” Mr. Warner said. “Remember, to make a change even in a national election doesn’t require penetration into 50 states.”

The Senate Intelligence Committee is one of three committees on Capitol Hill that have opened full-fledged investigations into the relationship between Mr. Trump, his associates and Russia. Given the committee’s jurisdiction over the intelligence community and a strong working relationship between Mr. Burr and Mr. Warner, it has been considered the congressional committee most likely to deliver a substantive report on Russia’s covert efforts.

Mr. Burr and Mr. Warner sought to inspire confidence on Wednesday that the committee remained on course to do so. They later got a boost from Representative Adam B. Schiff of California, the ranking Democrat on the House Intelligence Committee, who said he concurred with their statements based on his committee’s work.

The senators said that their investigators have pored over nearly 100,000 pages of classified intelligence and documents turned over by the Trump campaign and other associates of the president’s, and they have conducted more than 100 interviews with many of the top officials connected to both the Trump campaign and the intelligence community. Investigators also recently received material from Facebook and, to a lesser extent, Twitter, about advertisements on their platforms linked to Russia.

Mr. Burr had expressed a desire this summer to conclude the inquiry by year’s end. But on Wednesday, he all but conceded that with so many avenues of investigation still open — 25 interviews are scheduled for the remainder of October alone — that would not be possible. While he declined to put a date on the investigation’s conclusion, he said that the committee planned to release portions of its findings before the 2018 midterm election primaries.

Still, there were areas of inquiry — and of speculation — that the senators said they felt reasonably confident were benign and could be set aside. They include changes made to the Republican Party platform before last year’s Republican National Convention and vague and unsubstantiated reports of a secret meeting last year at the Mayflower Hotel in Washington between Sergey I. Kislyak, then the Russian ambassador, and Jeff Sessions, then a senator and now the attorney general.

In each case, Mr. Burr said the committee had interviewed all of the relevant witnesses and found no evidence of nefarious action.

“Campaign staff was attempting to implement what they believed to be guidance to be strong, to be a strong ally on Ukraine, but also leave the door open for better relations with Russia,” Mr. Burr said.

Mr. Burr was also unequivocal in saying that the integrity of the vote itself had been preserved, despite Russian attempts to test the vulnerabilities of 21 state election systems.

“We can certifiably say that no vote totals were affected,” Mr. Burr said, “that the tallies are accurate.”

He also repeatedly steered away from criticizing Mr. Trump, who has questioned the validity of intelligence assessments about the election. Mr. Burr said any questions of criminal acts were best left to the Justice Department’s special counsel, Robert S. Mueller III.

In regard to other areas, the senators acknowledged that their work was either stuck or inconclusive. Mr. Burr said they had thus far been unable to get traction on the so-called Steele dossier, a series of memos with sensational claims about Mr. Trump and Russia. The memos’ author, Christopher Steele, a former British intelligence agent, has not agreed to meet with investigators or the senators.

“The committee cannot really decide the credibility of the dossier without understanding things like who paid for it, who were your sources and sub-sources,” Mr. Burr said. Without Mr. Steele’s input, he continued, the committee had found it “impossible” to rebuild the dossier beyond a certain date.

And the committee has only just begun examining more than 3,000 ads turned over on Monday by Facebook. The company said the ads had been purchased by pages and profiles linked to the Internet Research Agency, a secretive company known for spreading Kremlin-linked propaganda, and investigators believe they are part of a highly coordinated disinformation campaign that sought to sow chaos and exploit divisive social issues.

The senators said that the committee itself would not release copies of the ads, but welcomed Facebook doing so if it so chooses as investigators continue to work to better understand the extent of the social media campaign.

The committee is also waiting for more information from Twitter. The company briefed congressional investigators last week, but Mr. Warner characterized its internal investigation of the issue as derivative and disappointing.

Google has started its own internal investigation and plans to cooperate with Congress. All three companies — Facebook, Twitter and Google — have been invited to testify publicly before the committee on Nov. 1.

Mr. Warner said he was optimistic that the companies were “recognizing that threat now.” He said Americans and political candidates deserved to know who was funding advertisements and why individual posts were trending.