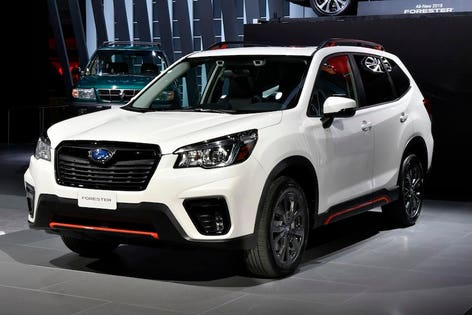 The all-new Subaru Forester knows who you are. As the first mainstream model to employ facial recognition technology, the Forester cannot only detect driver fatigue but can distinguish between drivers and automatically adjust the seat and mirrors. And this device won’t break the bank. Other models like the Lexus LC that offer this device start at over $70,000 whereas the Forester&nbsp;has priced it at under $40,000.

Recently revealed at the New York International Auto Show, this is the brand new Forester, even if it looks a lot like the old one. Not wanting to confuse or disappoint the market with one of its biggest selling models, the Japanese carmaker has opted for what it calls a “keep-concept” idea. That’s right, the firm wants to keep the Forester’s styling and concept pretty much as it has been for the past decade.

In fact, when you check out what Subaru has done with its new Forester, facial recognition is by far the most significant addition to the car. This feature is able to detect driver fatigue and inattentiveness using a small infra-red camera mounted on the top of the dashboard, and in tandem with its twin forward-facing EyeSight cameras, can detect when a collision is imminent, sound a warning, and even activate safety features such as emergency brakes.

The Forester in the first affordable car to get facial recognition.

This new facial recognition is intelligent and can determine who just sat in the driver’s seat. Once it has distinguished the driver’s identity through five parameters–relation between eyes, nose, mouth and chin–it will automatically adjust the driver’s seat and mirrors to suit that driver. Subaru&nbsp;says&nbsp;that the infra-red camera can even decipher identities through sunglasses.

The new Forester might sit on the Subaru Global Platform, which underpins the Impreza and XV, and incorporate the brand’s signature boxer engine and all-wheel-drive powertrain, but it loses the gutsy turbo engine option on the flagship model as well as its 6-speed manual transmission fitted to lower trim models.

Subaru has to keep its Forester fresh and relevant. And advanced technology like facial recognition helps the brand do just that. It makes sense when your brand is a small player (eighth&nbsp;biggest selling brand) in the North American market but your sales have climbed 5.4% over 2016 results to just under 648,000 units for 2017. And after the Outback, the Forester is the firm’s second biggest selling model with over 177,000 sales last year. This is one of Subaru’s main bread-and-butter cars so they don’t want to play with that successful formula too much.

The Forester is almost all new but looks similar to the outgoing model in what the Japanese call a ‘keep-concept.’

In contrast to what Toyota did with its new RAV4, Subaru took the outgoing Forester and merely tweaked its exterior with a taller grille, new wheel surrounds and restyled taillights. Subaru has done its homework—translated as customer clinics and found out that the vast majority of buyers like the current chunky, boxy, go-anywhere, suit any situation type of styling. So when you’re on a good thing…as they say.

Dozens of Subaru owners I have spoken to over the past decade say they like the brand’s signature boxer engine feel, all-wheel-drive powertrains and class-topping crash safety record. But while the design department minimized changes to the exterior, engineers also simplified the Forester’s engine line-up. Now, this crossover only gets a choice of one engine, a revised version of the 2.5-liter boxer-four that develops 182hp and 176 lb-ft of torque.

Thrown in the unwanted bin was the 250hp 2.0-liter turbo-four for the simple reason that, according to Subaru, only 5% of buyers were selecting it, though&nbsp;I’ve already heard from five potential buyers that they are disappointed with the scrapping of the turbo.&nbsp;The 6-speed manual transmission, standard on lower trims versions, will also disappear from the Forester line-up, replaced by the company’s CVT.

Subaru expects that the vast majority of customers will be more than satisfied with its new Forester, and without the turbo or manual gearbox options. This will be the first time that facial recognition is available in a car for under $40,000. Expect to see the Forester in showrooms by autumn. Remember this day because, inside a decade, every new car will have this technology.