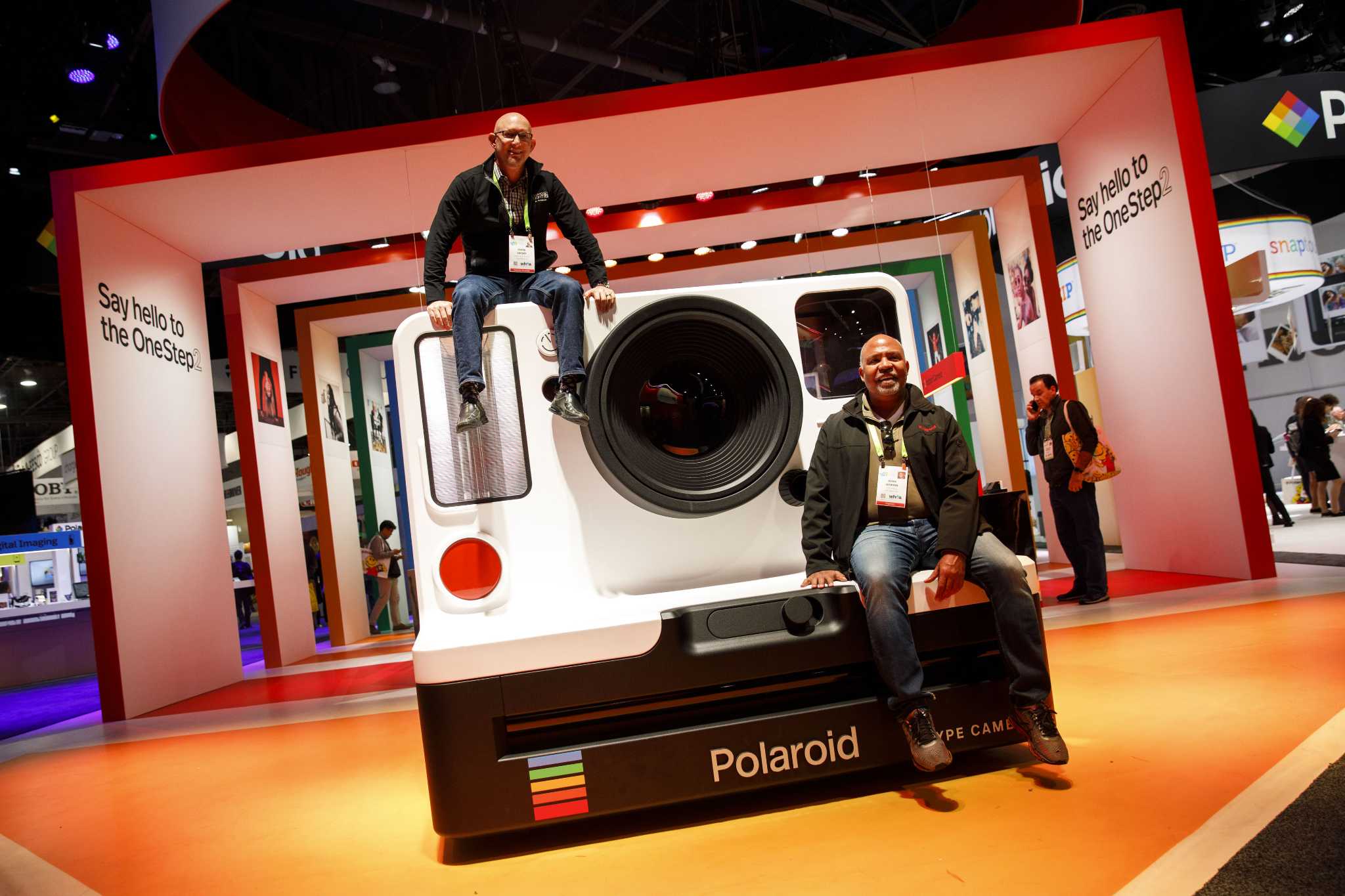 Attendees sit on top of a model of a Impossible BV Polaroid Original OneStep 2 camera at the 2018 Consumer Electronics Show in Las Vegas on Jan. 11, 2018. (

Attendees sit on top of a model of a Impossible BV Polaroid Original OneStep 2 camera at the 2018 Consumer Electronics Show in Las Vegas on Jan. 11, 2018. (

An attendee holds the Blackberry KeyOne smartphone during its launch event ahead of the Mobile World Congress in Barcelona, Spain, on Feb. 25, 2017. (

An attendee holds the Blackberry KeyOne smartphone during its launch event ahead of the Mobile World Congress in Barcelona, Spain, on Feb. 25, 2017. (

A customer plays a video game on the Nintendo Super Nintendo Entertainment System (SNES) console at a videogame store in Tokyo on Aug. 8, 2017. (

A customer plays a video game on the Nintendo Super Nintendo Entertainment System (SNES) console at a videogame store in Tokyo on Aug. 8, 2017. (

Even as we flirt with “Jetsons”-style bathrooms hooked up to digital assistants, breakneck races of flying “cars” and ever-improving technology, one thing remains clear: Our nostalgic minds remain glued to the rear-view mirror. Kodak made that abundantly clear when it revealed footage last week from its hotly anticipated reboot of the Super 8 camera, which revolutionized amateur filmmaking when first released in 1965.

It’s part of a movement that Kodak describes as an “analog renaissance.” The film-format camera-Kodak’s first since 1982-will cost $2,500 to $3,000, have a 3.5-inch LCD screen, variable speed control and C-mount lens support. An online platform will let you purchase film, processing and shipping. You’ll mail the goods to Kodak, which will process the film and scan it digitally before sending the files to your Darkroom account.

“Just as vinyl is making a comeback in music, film is being embraced by more and more amateur and professional filmmakers,” Brian Cruz, Eastman Kodak Co.’s vice president and general manager of consumer products, said. “There are many digital solutions out there. We aspire to balance the best of both worlds: the ease of capture and editing afforded by digital, with the luxurious color and texture offered by real film.”

Kodak isn’t alone as now more than ever, consumers seem to be looking toward retro tech. One national movie theater chain is even renting VHS videos. Who knows — maybe smartphone-assisted 18th-century chandeliers are just around the corner.

Here are seven other retro gadgets that are coming back stronger than ever.

We hope you saved all your old Game Boy cartridges. Gaming outfit Hyperkin.com plans to unveil its revamped version of the classic hand-held system late this summer for less than $100. Housed in aluminum, the scratch-resistant Ultra Game Boy will have a backlit LCD display with full RGB spectrum capability, a pair of stereo speakers, left and right audio-out connections, and a USB-C charging port. No need to bother with AA batteries that always seem to die when you’re finally about to crush a crucial game level: This baby has a built-in six-hour battery.

On its 80th birthday in September, Polaroid unveiled the OneStep 2, a $99 “instant analog camera” that shoots re-engineered, classic Type-600 and i-Type film. It’s part of a rolling effort started by the Impossible Project, now called Polaroid Originals, to bring back instant photos in all their offline glory.

Last year, Finnish company HMD Global brought us back to the early days of the new millennium with the re-release of the Nokia 3310, a lower-cost phone that first hit shelves in September 2000. The $60 throwback comes in four colors-and yes, you can play the Snake.

Not to be left behind (again), BlackBerry finally decided to grant Kim Kardashian her dream of the phone’s comeback with the launch of its KeyOne phone in April 2017. BlackBerry has since been tinkering with the wrapping: In August, the company announced a “Black Edition” and last month unveiled a bronze-colored model to be made available in overseas markets. The phones, which cost more than $550, all have 4 gigabytes of memory and 64 GB of internal storage, plus that signature keyboard Kardashian is so fond of.

First there was the NES Classic Console, a re-imagining of the hit gaming platform that launched in 2016 to great fanfare. Loaded with 30 classic games (among them Super Mario Bros., The Legend of Zelda, and Donkey Kong Jr.), the console has the look and feel as the original with one key difference: It’s been shrunk to miniature size for your gaming convenience. Then, in September of last year, another hit-a mini, revamped version of the SNES preloaded with 21 games. The $80 consoles are so popular they sell out everywhere almost immediately, so keep your eyes peeled.

There may be few living people nostalgic for the phonograph, but that didn’t stop the innovators at New Black from inventing a ceramic bluetooth speaker inspired by one. Constructed in the Italian town of Nove, famous for a ceramic industry dating to the 1700s, the Luciano speaker includes components normally found in hi-fi stereo systems. They’re not cheap, with most models going for about $720. If money is no object, you can splurge on the 24-carat gold-plated version for $1,700.

Love the clack-clack-clack of a classic typewriter? Keyboard maker Lofree wants you to enjoy that sound with its Four Seasons Retro Mechanical Keyboard without sacrificing Mac compatibility. At $74, these are cheaper (and more reality-based) than a time machine. Still in the final stage of development, the product is estimated to commence shipping in April.