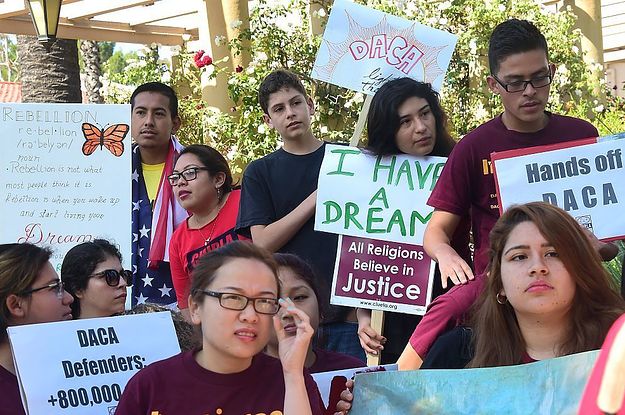 On Thursday, Fox News reported that Trump will end Deferred Action for Childhood Arrivals, the program also known as DACA, as early as Friday. Enacted by the Obama administration in 2012, the policy grants young immigrants who meet certain criteria a temporary reprieve from deportation. The reports are unconfirmed as of now.

But the news elicited strong criticism from tech companies, which say immigrants are a crucial part of their workforce. Uber and Microsoft publicly condemned the reported changes on Thursday. Meanwhile, FWD.us is collecting signatures on a letter that protests the potential move.

As entrepreneurs and business leaders, we are concerned about new developments in immigration policy that threaten the future of young undocumented immigrants brought to America as children.

The Deferred Action for Childhood Arrivals (DACA) program, which allows nearly 800,000 Dreamers the basic opportunity to work and study without the threat of deportation, is in jeopardy. All DACA recipients grew up in America, registered with our government, submitted to extensive background checks, and are diligently giving back to our communities and paying income taxes. More than 97 percent are in school or in the workforce, 5 percent started their own business, 65 percent have purchased a vehicle, and 16 percent have purchased their first home. At least 72 percent of the top 25 Fortune 500 companies count DACA recipients among their employees.

Unless we act now to preserve the DACA program, all 780,000 hardworking young people will lose their ability to work legally in this country, and every one of them will be at immediate risk of deportation. Our economy would lose $460.3 billion from the national GDP and $24.6 billion in Social Security and Medicare tax contributions.

Dreamers are vital to the future of our companies and our economy. With them, we grow and create jobs. They are part of why we will continue to have a global competitive advantage.

We call on President Trump to preserve the DACA program. We call on Congress to pass the bipartisan DREAM Act or legislation that provides these young people raised in our country the permanent solution they deserve.

“Dreamers grew up here, live here, and are contributing to our communities and our economy,” an Uber spokesperson said in a statement Thursday. “Their contributions make America more competitive and they deserve the opportunity to work, study, and pursue the American dream.”

“DACA recipients bring a wide array of educational and professional backgrounds that enable them to contribute in crucial ways to our nation’s workforce,” said president Brad Smith in a blog post. “They are part of our nation’s universities and work in every major industry. They are artists, advocates and health care providers. They help meet the needs of our communities and our companies.

CEO Satya Nadella followed up with a more personal note on LinkedIn. “As I shared at the White House in June, I am a product of two uniquely American attributes: the ingenuity of American technology reaching me where I was growing up, fueling my dreams, and the enlightened immigration policy that allowed me to pursue my dreams,” he wrote.

Stephanie Lee is a senior technology reporter for BuzzFeed News and is based in San Francisco.

Michelle Broder Van Dyke is a reporter and night editor for BuzzFeed News and is based in Hawaii.

Got a confidential tip? Submit it here.