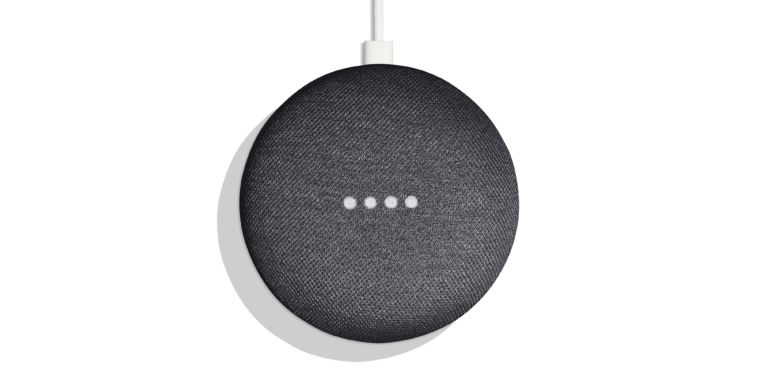 SAN FRANCISCO—We’re live from Google’s big hardware event, and the latest item to be announced is the Google Home Mini. If Google’s Home hardware strategy is “copy whatever Amazon is doing, but with Google software” then the Google Home is the Amazon Echo, and the Mini is Google’s answer to the Echo Dot.

The original $129 Google Home combined Google Assistant smarts with a decent speaker system good enough to fill a room with sound. The Google Home Mini drops the beefy speaker setup for one designed to mainly handle voice responses. In return, you get a much smaller body and presumably a smaller price tag.

The design is a small circular puck, with a plastic base and fabric top. Google custom-made the top material to be light and strong, but also allow light and sound to permeate it. It’ll come in coral, chalk, and charcoal colors, so hopefully, two out of those three will fit in with your home’s decor (the coral color might be polarizing). Four LEDs shine through the fabric, giving you some visual feedback of what the device is up to. Tapping the top of the device lets you control things like volume level and the voice assistant.

With the $49 price tag, the goal is to have you put one of these in each room, at a much lower cost than the bigger $129 version. This is similar to how Amazon’s Echo Dot is positioned—a smaller, more affordable version of the company’s main voice assistant speaker that makes the core technology more accessible for everyone.

Another new addition to Google’s home offerings is Google Home Max. This is essentially Google’s response to Apple’s HomePod: it’s a large, rectangular version of the original Google Home with a much more powerful sound system. The rounded-edged speaker can be flipped to sit horizontally or vertically, depending on where you have it in your home.

Home Max has a front panel made out of the special fabric found on the Home Mini, which gives it a softer look while allowing sound and light to pass through it. The back panel is made from rigid polycarbonate, giving the large block some stability. Inside the Home Max are dual 4.5-inch high-excursion woofers, customer 0.7-inch tweeters, and an acoustic brace.

Google claims this device is 20 times more powerful than the original Google Home, which has only a two-inch driver and dual two-inch passive radiators. In addition to connecting Home Max to a device with Cast or Bluetooth support, it also has an auxiliary port so you can connect it to a turntable or other speaker.

Home Max will be compatible with a new software feature called “smart sound,” which adapts audio to your home’s design, the time of day, and ambient sound in the room. This sounds similar to some of the features in Apple’s forthcoming HomePod, which won’t be available until the end of this year (like the Google Home Max). But unlike the HomePod, which only works with Apple Music, Google Home Max will be compatible with a variety of music services. Both free and paid Spotify accounts were highlighted, along with YouTube Music and Google Music.

Google also emphasized the importance of its “voice match” software, which lets multiple different users in a household use the same Google Home device, but receive different answers. Google Assistant will build a virtual model of your voice using Voice Match, so when you ask it a personal question involving your calendar, it will retrieve information from your calendar. This makes each answer that Google Assistant provides more personal to the person speaking.

Another new feature Google highlighted is “broadcasts,” which lets you send a message to all Google Homes in one household. Now you can say, “Ok Google, broadcast this message” followed by your message, and every Google Home device will say that message similar to an intercom system. As Google reps said on stage, this will likely be a hit with parents and a nightmare for children. It’s also a subtle way for Google to encourage customers to buy more than one Google Home device for their households.

We were disappointed with Google Home’s functionality when it launched last year, but the devices silently update themselves direct from Google, and the company has been steadily patching in new features over the months. Google Home gained the ability to support multiple users with voice authentication, reminders and notification support, and the ability to create calendar events and make phone calls. They’re turning into capable devices, and it will be worth revisiting the whole setup when both the Mini and Max launch.